When it comes to voting by constituency, about 36 percent preferred a candidate from the LDP-led coalition, while nearly 20 percent expressed support for one backed by opposition parties.

Kishida, who took office less than a month ago, called the election seeking a mandate to implement his COVID-19 and economic policies. He has said the LDP and its smaller partner Komeito are aiming to retain a majority of the 465 seats in the House of Representatives, the powerful lower chamber of parliament.

In the nationwide telephone survey, conducted over the weekend, 29.9 percent said they will vote for the LDP in the proportional representation section, under which 176 seats will be allocated based on how many votes parties win in 11 regional blocks.

The CDPJ had the backing of 11.6 percent, with the gap between it and the LDP down 1.6 percentage points from the previous poll conducted Oct. 16-17.

Komeito, which is backed by the lay Buddhist organization Soka Gakkai, was chosen by 5.2 percent of respondents in the latest survey, while 4.8 percent said they will vote for the Japanese Communist Party.

Five opposition parties including the CDPJ and the JCP have formed an alliance for next Sunday’s election, putting aside ideological differences and consolidating candidates in order to avoid splitting voters critical of Kishida and his predecessors, Yoshihide Suga and Shinzo Abe.

But the survey suggested such cooperation may be a double-edged sword, with 44.7 percent voicing approval for the tactic and 48.5 percent disapproval.

Regarding constituency voting, where ballots will be cast for specific candidates, 33.3 percent said they will back the LDP, while 13.1 percent expressed support for the CDPJ, 4.3 percent for the JCP and 2.7 percent for Komeito.

The difference between the ruling coalition and the opposition alliance narrowed by 5.2 points compared with the previous survey. 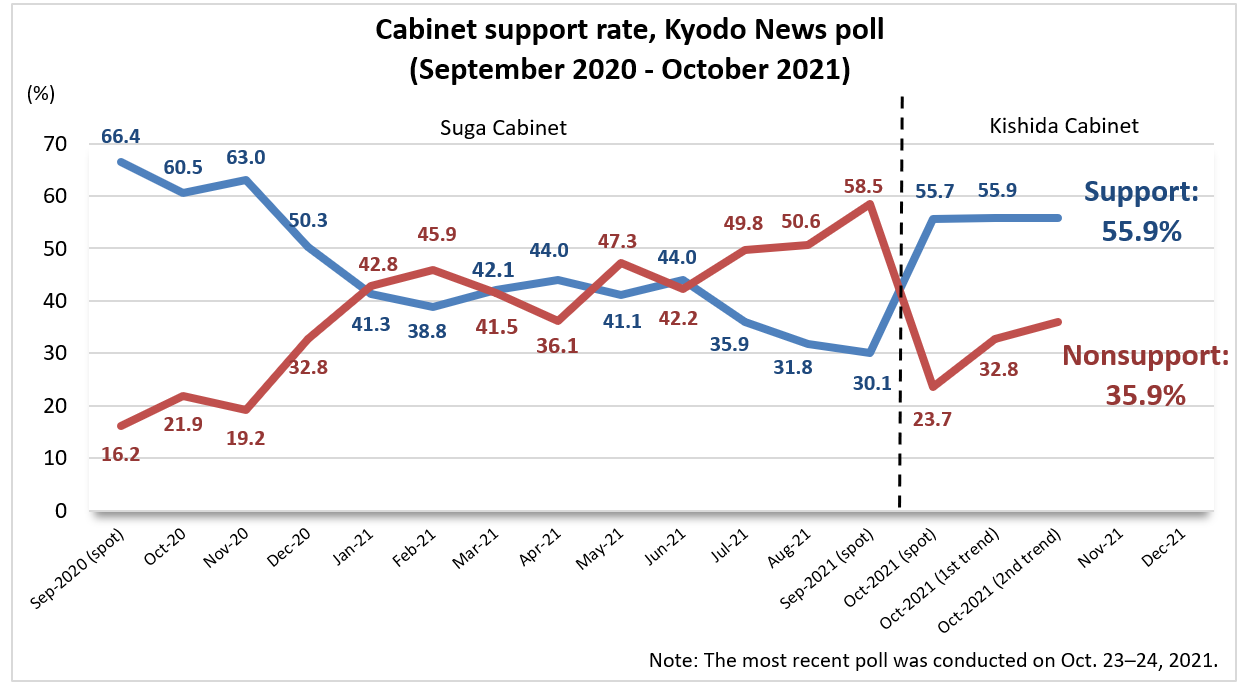 Asked what they view as the most important issue of the general election, 36.7 percent said economic policy, up 2.0 points, and 16.1 percent said the COVID-19 response, down 3.3 points.

Disappointingly for Kishida, 48.2 percent said they are not optimistic about his economic policy, in which he has pledged to put the world’s third-largest economy on a growth track and redistribute wealth to the middle class, while 44.6 percent said they have high hopes.