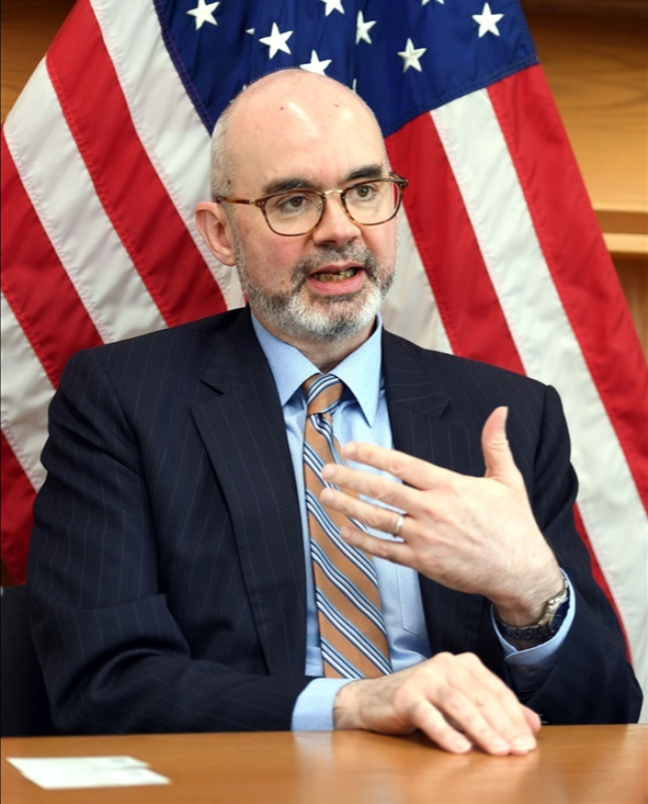 The United States is focusing on competition with China, yet President Joe Biden has indicated he aims to manage the relationship appropriately so that the competition does not develop into conflict. “We are not seeking a new Cold War,” he has said. What kind of relationship does the U.S. seek to have with China? Nishinippon Shimbun sat down with U.S. Chargé d’Affaires ad interim Raymond Greene during his visit to Fukuoka on official business.

Nishinippon Shimbun: How will the U.S. handle China?

Nishinippon Shimbun: The Xi Jinping leadership has expressed a strong desire for unification with Taiwan. Can the Taiwan issue also be managed between the U.S. and China?

Chargé Greene: China has stepped up large-scale military movements in the area surrounding Taiwan, and China is increasing both diplomatic and economic pressure on Taiwan. We are very concerned, and we will counter moves to unilaterally change the status quo. We would like to support Taiwan’s participation in international organizations as well as its economic and interpersonal exchanges, in cooperation with Japan and Australia, which share our same concerns.

Nishinippon Shimbun: The Biden administration is promoting partnerships with China in mind. These include the “Quad” cooperative framework among Japan, the United States, Australia, and India and the “AUKUS” security pact among the U.S., the UK, and Australia.

Chargé Greene: All countries participating in these partnerships support a “rules-based order” in the fields of security, politics, and the economy. They share this in common. In contrast, China is trying to undermine such an order. Japan promotes the same values as America at international institutions, including those the U.S. is not involved in, and in its bilateral relations with other countries. Japan is our most important partner.

Nishinippon Shimbun: Some in Japan are concerned that provoking China will harm Japan’s national interests because Japan has a close economic relationship with this Asian neighbor.

Chargé Greene: The United States also has great interest in the Chinese economy. I don’t think there is a big difference between the United States and Japan [in this regard]. China, however, is stealing other nations’ advanced technologies in the economic field. We are grateful that Prime Minister Kishida Fumio created the position of Minister in Charge of Economic Security. We would like to enhance the cooperation between our two countries to stabilize supply chains and protect intellectual property.

Nishinippon Shimbun: What kind of relationship is the U.S. seeking to form with China by engaging in competition? Will the U.S. be able to force China to obey the rules through competition?

Chargé Greene: China needs to join international systems as a responsible player. If it does that, it will be able to achieve the economic goals it seeks. The fact is, however, that China is going in the opposite direction, and we must compete to protect our rights and interests. The United States and China share common concerns, such as climate change and North Korea’s nuclear and missile development programs. The U.S. leaves the door open, and we would like China to see that cooperating offers it benefits as well.

Nishinippon Shimbun: With the withdrawal of U.S. troops from Afghanistan, anxiety has swept through Taiwan and Hong Kong that they “may also be abandoned by the United States someday.”

Chargé Greene: Afghanistan cannot be compared to the Indo-Pacific. The Indo-Pacific is extremely important to us and lies at the core of our interests. We have security treaties with our allies in the region and have shared strong ties for decades. We would like people in the region to have peace of mind from that standpoint as well.

Chargé Greene: Tariff measures were put in place by the previous administration. Because we have not seen any improvements on the Chinese side, we will continue to apply those tariff measures. China is committing extremely serious human rights violations in the Xinjiang Uyghur Autonomous Region and is repressing pro-democracy activists in Hong Kong. The international community must speak out.

Nishinippon Shimbun: Some say that it is not possible to change China through sanctions.

Chargé Greene: China is a nation that cares very much about its reputation. If the international community speaks out, China’s reputation will deteriorate. By imposing sanctions not only on the government but also on high-ranking government officials and other individuals, we will be able to have China end its policies that violate human rights.

Nishinippon Shimbun: There is deep-rooted caution in Japan about human rights diplomacy.

Chargé Greene: Japan has a strong presence in the Indo-Pacific, and it would be desirable for Japan to publicly criticize China for its human rights violations. Japan has a very important role to play in ensuring China responds constructively.

Raymond Greene is a member of the U.S. State Department’s Senior Foreign Service and has served as Director for Japan and East Asian Economic Affairs at the White House’s National Security Council and as Deputy Director of the Taipei Office of the American Institute in Taiwan (AIT). He assumed duties as Chargé d’Affaires ad interim in July this year and is the top official at the U.S. Embassy in Japan until the next U.S. Ambassador to Japan takes office. He is a graduate of the University of Maryland and is 50 years old.