TOKYO — The U.S. Navy secretary on Monday warned China and Russia against bullying other nations after they sent warships through two maritime choke points in northern and southern Japan.

“The relationship between China and Russia perhaps recently has evolved in ways where they’re trying to intimidate other nations with their actions that don’t abide by a rules based international order,” Carlos Del Toro told reporters in a phone briefing in Tokyo, where he is meeting Japanese government and military officials.

Last Monday, 10 Chinese and Russian warships passed through the Tsugaru Strait that runs between Japan’s main Honshu island and the island of Hokkaido, Japanese Defense Ministry’s Joint Staff said in a statement. The same 10 ships sailed westward through the Osumi Strait in the southern prefecture of Kagoshima on Friday, in effect, circumnavigating Japan in an unprecedented provocative move.

“It’s necessary to certainly deter them from bullying other countries and being aggressors in any possible way. … We want to maintain peace and stability and the Indo-Pacific,” Del Toro said.

Japan’s government is “watching with great interest the activities of Chinese and Russian warships around Japan,” Deputy Chief Cabinet Secretary Yoshihiko Isozaki told reporters last week. “We will take nothing for granted in our warning and surveillance activities in the air and sea domains around Japan.”

The straits the warships passed through only count three nautical miles from each shore as territorial waters, as opposed to the customary 12 miles, leaving the central portion of the narrow strait as international waters. This is said to be a Cold War relic that let American vessels carrying nuclear weapons pass through, without violating principles that prohibit the introduction of nuclear weapons into Japanese territory.

Del Toro said that the U.S. would seek to deter such provocations by continuing to remind China and Russia that good nations abide by a rules-based international order. “When nations behave aggressively in violation of other countries’ expanded economic zones, for example, all those actions lead to behavior that simply cannot be tolerated.” 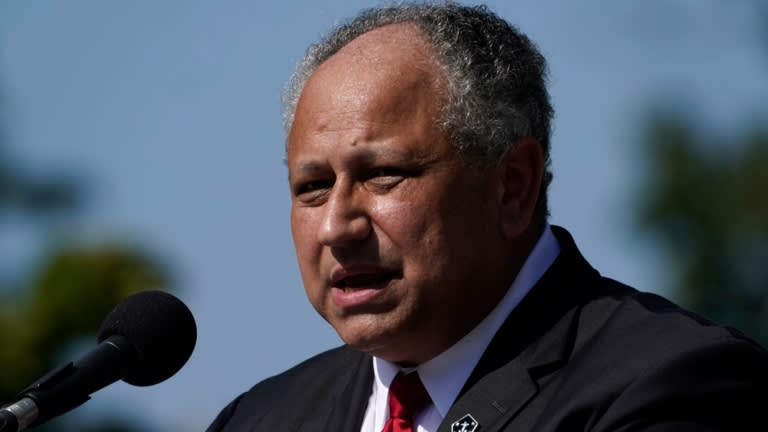 U.S. Navy Secretary Carlos Del Toro speaks at a groundbreaking ceremony for a dry dock project at Portsmouth Naval Shipyard in Kittery, Maine, in the U.S., on Sept. 8.    © AP

The navy secretary has met with Japanese officials including Defense Minister Nobuo Kishi and Gen. Koji Yamazaki, chief of staff of the Japan Self-Defense Forces’ Joint Staff. Following his visit to Japan, he will travel to South Korea, Papua New Guinea, Guam and Hawaii, before returning to the U.S. mainland.

The U.S. Department of Defense is undertaking a posture review to determine if the military has the correct number of troops in the correct places. Del Toro said the review would be completed by the end of this year or early 2022, but declined to say whether more activity can be expected in terms of transits or navigation operations through the Taiwan Strait.

“We are going to do everything as a navy to be as forward-leaning as possible to ensure that we can protect our country’s national security and economic interests, and those of our allies and partners,” he said. “And so, all bets are on the table, with regard to what we’re looking at, and we’re going to work very closely with our partners to position ourselves, collectively together, basically, to be able to deter, China, or any other country that presents itself in ways [contrary] to our national security interest.”

Del Toro, who was born in Cuba and came to U.S. as a refugee as a child, was sworn in as 78th secretary of the Navy in August. He stressed the importance of the Japan-U.S. alliance for regional security.

“We all share this common desire that all free nations maintain the rules-based international order, it’s so very important to ensure that we maintain open lines of communication and freedoms for each of these nations to pursue their own economic interests.”