The aim was to make sure that the military’s footprint fit the administration’s foreign policy and national security priorities — in other words, China. The review was widely expected to conclude around the summer, but deep into October, it is still underway inside the walls of the Pentagon.

The Office of the Secretary of Defense has been reaching out to allies such as Japan, discussing the plans. But one Japanese official said that he was mildly surprised by the lack of big decisions that typically accompany a global-scale posture review. “It doesn’t look like Japan will feature much in the review,” the official said.

One reason the review has not concluded could be because the Biden administration cannot decide on how to deter China.

“There is an ongoing debate,” said Bryan McGrath, a retired surface warship officer and founding managing director of consultancy The FerryBridge Group, “between those who believe that powerful, numerous, networked naval forces [deployed] forward act as a deterrent and can lead to security and prosperity, and those who can’t prove that with algorithms and math and so dismiss it as a wish and a prayer.” 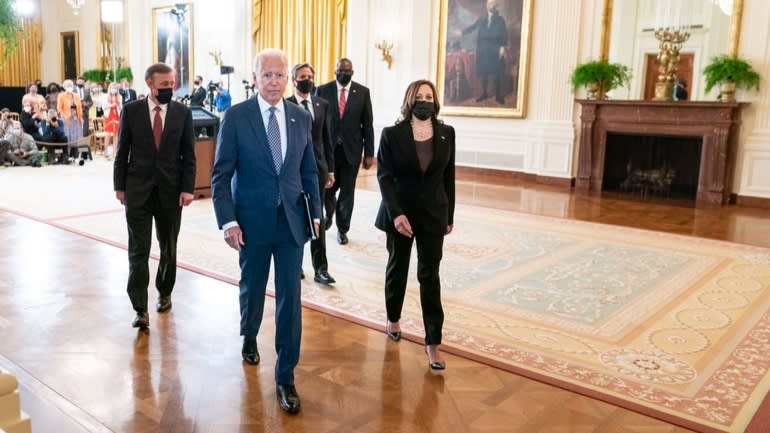 “Denial” is the more conventional method of deterrence, dissuading China from taking action through a heavy forward presence in locations such as Japan, South Korea and Singapore.

People who advocate for “punishment,” meanwhile, “tend to be more enthusiastic about funding programs and capabilities that manifest themselves after the shooting starts,” such as long-range missiles, Air Force bombers and attack submarines, McGrath said.

Combatant commanders seem to tilt toward denial, or a bigger forward presence.

“I’m a forward-deployed person. Man, I would have forces all over the place out there,” former Chief of Naval Operations — the Navy’s highest ranking officer — Adm. Jonathan Greenert told the Institute for Corean-American Studies in a webinar on Oct. 19, speaking about naval presence in the Indo-Pacific.

Pointing to the roughly 20 U.S. warships based in Yokosuka and Sasebo in Japan, Greenert said: “I’d try to see if we can get that to 30, 35,” he said. “Because we don’t have nearly enough forces to respond quickly,” to China’s actions. Then-Chief of Naval Operations Adm. Jonathan Greenert delivers remarks at Chatham House in London in June 2015. Greenert calls for increasing the number of warships forward-deployed to the Indo-Pacific to deter China. (Photo courtesy of the U.S. Navy)

The administration of former President Donald Trump made a clear tilt toward the “denial” camp. One of the chief advocates for that shift was Elbridge Colby, the former deputy assistant secretary of defense for strategy and force development and the principal author of Trump’s 2018 National Defense Strategy.

“We were trying to move to a deterrence by denial model, whose basic logic is that you’re best off if you can convince the other side that they’re going to fail, not that you’re going to punish them so much they’ll disgorge whatever they gain,” Colby told Nikkei Asia.

Another source of contention in the Pentagon is the new concept of “integrated deterrence” that has been floated by Austin. It calls for a “whole-of-government” approach to strengthen competition with China, rather than focus solely on the military aspect. Diplomacy, cyber tools, economic incentives and sanctions are all expected to enhance deterrence.

But the concept has been met with suspicion, especially after Biden’s fiscal 2022 defense budget request grew less than inflation and called for fewer new ships than during the Trump years.

“It sure seems like a funny way out of the gate, when we say China is the biggest challenge in the Pacific, and it’s mostly a maritime challenge, and then go cut the number of warships they are buying. That doesn’t make a lot of sense,” said Tom Shugart, an adjunct senior fellow at the Center for a New American Security and an expert on the Chinese military threat.

“It’s hard to tell if it’s competition with domestic priorities, but it’s certainly a head scratcher,” he said.

Colby said he is worried about the Biden administration’s “lack of sharp focus” on deterrence. “The way the administration is talking now about this is more of a hodgepodge. This ‘integrated deterrence’ idea sounds like ‘we’ll have some denial but then we’ll have some economic and diplomatic pressure and the like.’ That sounds nice but won’t work if we don’t meet the high denial standard,” he said.

McGrath said he saw this coming. “It’s obvious. The Deputy Secretary of Defense Kath Hicks led a long effort when she was in the think tank world that was called ‘Getting to less.’ It was a series of defense strategies that would have a lower footprint, a lower cost, lower continuing costs and lower lifecycle costs. There’s nothing they are doing that they didn’t telegraph they wanted to do,” he said. 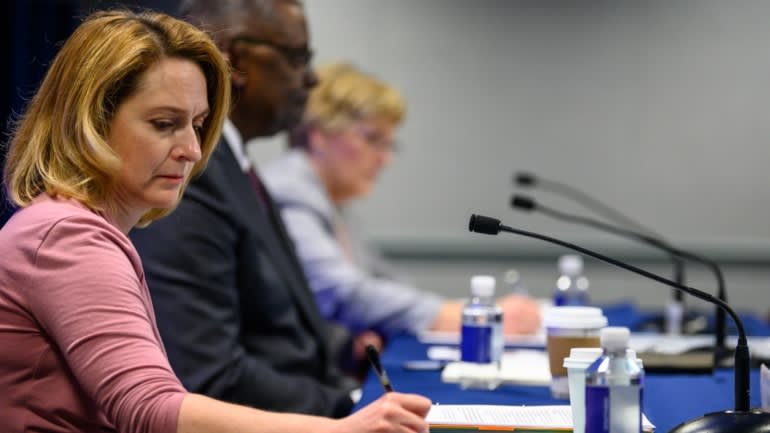 Deputy Secretary of Defense Kathleen Hicks sits with Secretary Lloyd Austin at a roundtable at the Pentagon. Before assuming her post, Hicks led a project at the think tank Center for Strategic and International Studies called ‘Getting to less,’ which explored defense strategies that would have a lower footprint and a lower cost. (Photo courtesy of the Department of Defense)

At the heart of the many debates inside the White House and the Pentagon is how to deter China.

The New York Times reported Oct. 17 that Biden’s top aides do not see the challenges with China as part of a new Cold War. “Instead, they argue that it should be possible for the two superpowers to compartmentalize, cooperating on the climate and containing North Korea’s arsenal, even while competing on technology and trade, or jousting for advantage in the South China Sea and around Taiwan,” the report said.

Colby took issue with the word “jousting,” that draws from the medieval sports contest in which two opponents on horseback fought with lances.

“They want to compete and joust in the South China Sea but then cooperate on climate. That’s naive about how much the military dimension is critical and central,” he said.

“Their statement is an aspiration, not a strategy,” Colby added, warning that despite any superficial gains in diplomacy, once the Chinese do have military capacity, “the politics and the diplomacy will be determined by the military.”

The delay in the Global Posture Review could also have been linked to an effort by the Biden administration to garner Chinese cooperation toward the COP26 climate summit that begins at the end of this month. Biden and Chinese President Xi Jinping have also agreed in principle to hold a virtual summit by the end of the year, and the White House may have tried to avoid revealing a new force posture blueprint that is clearly focused on encircling China.

Brent Sadler, a senior fellow at the Heritage Foundation and a 26-year Navy veteran, said the Global Posture Review is more likely to be “a bureaucratic drill” than a new grand strategy. “I had high hopes that it would be a true posture review, where we’re looking at ‘where do we have a hard time maintaining our presence?’ And then, ‘what kind of basing and what kind of new access we need looking out 20 years.’ It’s not that, unfortunately.”

One area that Sadler hopes may be included in the Global Posture Review is a focus on Southeast Asia. “Right now, the weakest place that needs the most attention is the South China Sea,” he said.

“The only way you’re really going to get that sustained persistent presence is that you have to have a dedicated structure, like a task force.” 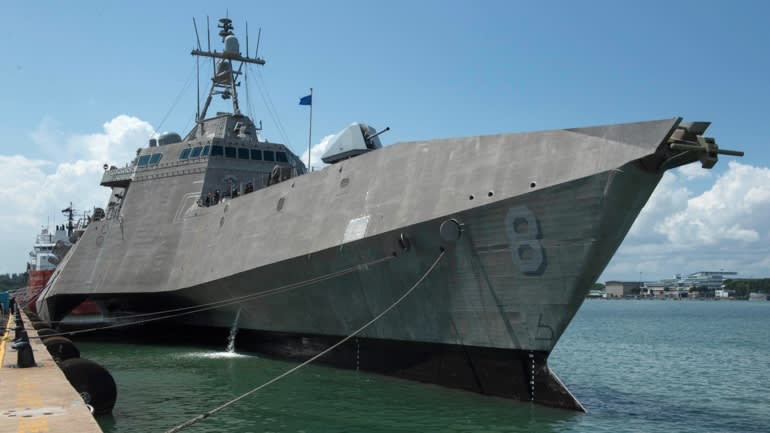 The Independence-variant littoral combat ship USS Montgomery sits pierside at Changi Naval Base, Singapore, after arriving for a rotational deployment in July 2019. The U.S. Navy uses Singaporean ports on a rotational basis. (Photo courtesy of the U.S. Navy)

Such a task force could be in line with the revival of a “First Fleet” that focuses on the western part of the Indo-Pacific, that was proposed by former Navy Secretary Kenneth Braithwaite.

Collin Koh, a research fellow at Singapore’s S. Rajaratnam School of International Studies, said that while Singapore may be reluctant to open a new U.S. naval base, it is open to increasing access for U.S. ships under the current framework of cooperation.

“There is an appetite for sustaining and enhancing U.S. presence in the region,” he said.

But Koh added that Southeast Asian countries will also be closely watching the U.S.-China rivalry, and adjust strategies accordingly.

“Certainly, the sentiments and perceptions that will shift policies in Southeast Asia are very much shaped by the ongoing China-U.S. rivalry. It was interesting to see that in the recent times, Southeast Asian countries are actually intensified engagements with non-U.S. external powers such as Australia, France, Japan, India,” he said.

“I do see those alternative engagements with non-U.S. partners as being a potential third way for them to pursue.”