OYAMA, Japan — On a nearly empty racetrack in the foothills of Mt. Fuji, a Tokyo-based drone startup unveiled its vision for the future of transport: a flying motorcycle able to hit speeds of up to 100kph.

In a scene straight out of a sci-fi film, the driver fired up the Xturismo, which rose several meters off the ground and cruised along the track for about a minute and a half. Reporters and guests — all wearing earplugs against the deafening noise — looked on.

Developed by A.L.I. Technologies, the “hoverbike,” as the company describes it, weighs 300 kg and is capable of carrying a single rider. According to the company, it can travel at its top speed for up to 40 minutes.

A.L.I., which is backed by Kyocera and Mitsui Sumitomo Insurance Venture Capital, started taking orders for the bike the same day it was unveiled and plans to deliver the limited-edition run of 200 vehicles to customers by the first half of next year. The price is set at 77.7 million yen ($682,000).

Powered primarily by an internal combustion engine, Xturismo relies on two main propellers to stay aloft. The bike is equipped with the same altitude control technology A.L.I. uses in its drone products, allowing it to glide smoothly through the air.

“We would like to propose a new lifestyle with this floating vehicle,” CEO Daisuke Katano said at the unveiling ceremony.

In addition to leisure, the bike could also be used to help rescue people from accidents on the water, said a member of Japan’s ruling Liberal Democratic Party who attended the ceremony.

A.L.I.’s four-year achievement comes as the race to sell flying motorcycles heats up around the world. U.S.-based JetPack Aviation recently said it had succeeded in a flight test of a prototype of the Speeder, reportedly setting itself on course for a launch as early as 2023. Pre-orders start at $380,000. French startup Lazareth is also developing a flying motorcycle. 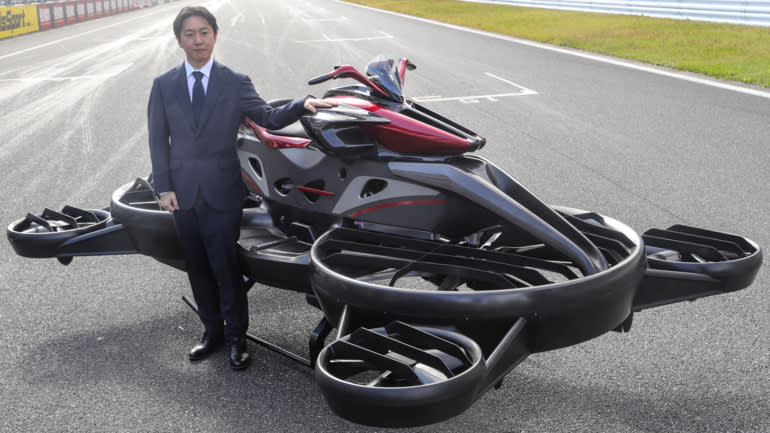 ‘We would like to propose a new lifestyle with this floating vehicle,’ said Daisuke Katano, A.L.I. Technologies chief executive. (Photo by Ken Kobayashi)

Investment has been pouring into flying cars, with Toyota Motor investing 43 billion yen in U.S.-based Jobby Aviation in January 2020. HT Aero, a flying car startup backed by Chinese electric vehicle company Xpeng, said last week it has raised over $500 million in its latest funding round.

Honda Motor revealed last month that it has been developing a flying car as a part of its 5 trillion yen research and development over the next six years.