TOKYO — Japan’s small and medium-sized enterprises (SMEs) are facing financing difficulties, as the burden of repayment ratio — calculated by dividing debt balance by annual profit from core businesses — soared at the end of March to levels not seen since immediately after the 2008 global financial crisis.

“I don’t think I can survive the winter if COVID spreads again and forces me to cut back my business,” said the operator of a grilled chicken restaurant near Kanda Station in Tokyo.

Despite a seating capacity of only around 20, the restaurant spends up to 3 million yen ($26,000) monthly on expenses outside of rent and payroll. It is almost out of money, as a monthly deficit of hundreds of thousands of yen continues to pile up. Although customers have returned since the COVID state of emergency ended in September, “shutting down my business remains an option,” the operator said.

While companies in Japan are borrowing more money, their earnings are barely rising. According to data compiled by the Policy Research Institute, the burden of repayment — calculated by dividing interest-bearing debt by earnings before interest, taxes, depreciation and amortization (EBITDA) — stood at 4.9 times at the end of March, close to the 5.2 times at the end of March 2009 following the 2008 financial crisis.

The figure represents the years needed to repay debt if annual profit is used exclusively for that purpose. Repayment windows are narrowing for small and midsize companies as well as mom-and-pop shops. While the figure stands at 4.7 times for big companies capitalized at 100 million yen or more, it is almost 14 times for firms with a capital of less than 10 million yen because of setbacks in the restaurant industry and other sectors that contain many small and midsize firms.

According to the 2016 Economic Census of Japan, SMEs — including sole proprietors — account for 99.7% of all enterprises and 68.8% of all employees. 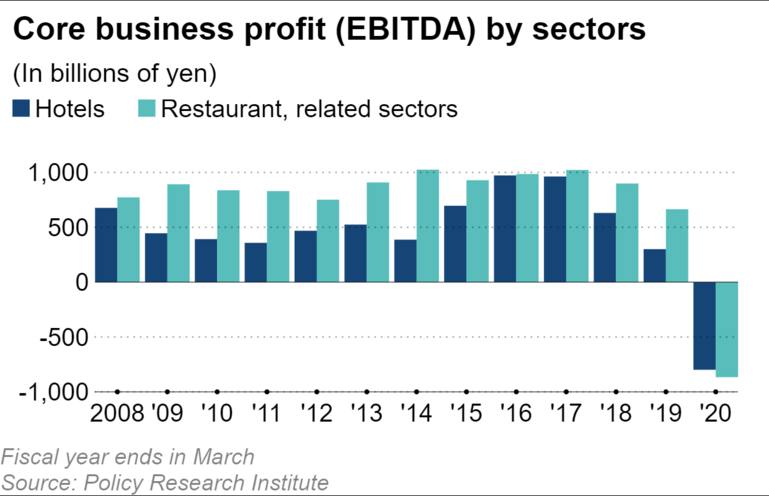 Bankruptcies, meanwhile, have been held in check. In the first half of fiscal 2021 they dropped 24% from a year earlier to a 57-year low of 2,937, according to Tokyo Shoko Research. This is in sharp contrast to 2009, when more than 15,000 companies went belly up, resulting in high unemployment.

For more than half of borrowers of such loans, the deadline to repay the principal is the end of 2022. If COVID-19 infections rise and hit corporate activity again, many companies may not be able to repay or even service loans. “The watershed moment will come at the end of the year or early next year,” said Yoshihiro Sakata, an analyst at Tokyo Shoko.

A packing material maker in Tokyo that went bankrupt at the end of August may be an example of what is in store. The company financed aggressive capital investment via borrower-friendly loans. But after the pandemic struck, sales stalled and repayment of even these loans became impossible. While local governments guarantee bad loans, the burden is eventually passed onto taxpayers, as bankruptcy is mostly covered by insurance from Japan Finance Corp., a public financial service entity. Insurance underwritten by the JFC in fiscal 2020 exceeded 33 trillion yen. In the year ended March, JFC incurred a net loss of 1.037 trillion yen because it booked reserves for future insurance payments as expense.

JFC’s loss will expand if bankruptcies increase more than anticipated as a result of the pandemic. The collapse of JFC is impossible because it is wholly owned by the government. But some 1.5 trillion yen poured into it to deal with COVID came from taxes; hence containing COVID is a prerequisite for lessening the burden on the JFC.

The government’s plan for growth, endorsed by the cabinet in June, includes such expressions as “a fundamental improvement in earnings power is indispensable.”

To prop up small and midsize companies, the government must implement measures so that firms can increase earnings on their own, rather than hand out more loans.