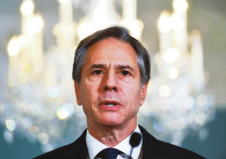 WASHINGTON — On Oct. 26, U.S. Secretary of State Antony Blinken issued a statement in support of Taiwan’s participation in the UN system. Oct. 25 marks the 50th anniversary of the UN resolution on China’s membership and Taiwan’s withdrawal. In light of the anniversary, the statement stressed, based on Taiwan’s mature democracy and success in containing COVID-19, that “Taiwan’s exclusion undermines the important work of the UN and related organizations,” calling on other UN member states to join the U.S.

On Oct. 22, the State Department held online high-level talks with Taiwan’s Ministry of Foreign Affairs on expanding its participation in the UN and other international organizations. On Oct. 21, President Joe Biden expressly stated that the U.S. has a responsibility to defend Taiwan. These moves clearly indicate Washington’s shift to a greater focus on Taiwan.

In parallel with Washington’s strategy of diplomatic and military deterrence against the PRC, the U.S. apparently intends to push for the expansion of the “sphere” where Taiwan can act in the international community.

Secretary Blinken assessed that Taiwan has become a democratic success story “that is in alignment with the UN’s values of “transparency, respect for human rights, and the rule of law.” The secretary also said that Taiwan is critical to the high-tech economy and a hub of soft power including culture and education. “We are among the many UN member states “who view Taiwan as a valued partner and trusted friend,” Secretary Blinken stressed.

The statement pointed out that “although we have much to learn from Taiwan’s world-class response to the COVID-19 pandemic, Taiwan was not at the World Health Assembly.” The secretary went on to say that the international community faces complex and global issues and it is critical for all stakeholders, including the people who live in Taiwan, to help address these problems. “Taiwan’s “meaningful participation in the UN system,” he said, “is not a political issue, but a pragmatic one.”

The statement made no mention of the pros and cons of Taiwan’s “membership in the UN” and expressly stated that Taiwan’s participation throughout the UN system is consistent with the U.S.’s “one China” policy.

On Oct. 25, 1971, the UN passed the “Albanian Resolution” [UN Resolution 2758] by a majority vote. The resolution recognized the People’s Republic of China as the [only legitimate] representative of “China,” which until then had been Taiwan’s Chiang Kai-shek administration. The resolution also called for expelling the Chiang administration.  Taiwan’s UN representative left the General Assembly conference room before the vote; thus Taiwan withdrew from the UN.

Taiwan has criticized the “misuse” of the resolution, saying that the resolution merely dealt with the right to represent “China” at the UN and “did not grant the People’s Republic of China the authority to represent Taiwan at UN organizations,” according to Taiwan’s Ministry of Foreign Affairs.

On Oct. 26, U.S. Republican Senator Jim Risch, a leading member of the Senate Committee on Foreign Relations, issued a statement saying, “China is using the “Albanian Resolution” to not only unfairly exclude Taiwan from participation in the UN and related organizations, but also to prevent Taiwanese from entering the UN building.

The senator asserted that the resolution does not constitute a reason for Taiwan’s exclusion from the UN, and the U.S., its allies, and friendly nations should support Taiwan’s participation in the UN.

As European and other countries are increasingly inclined to deepen their relations with Taiwan, the U.S. seems to be attempting to use the statements to gain support for Taiwan from those countries, making the encirclement of China more complex and layered.

On the other hand, the release of the latest statements will inevitably irritate China, as they came just after Chinese leader Xi Jinping’s speech commemorating the 50th anniversary of China’s UN membership.