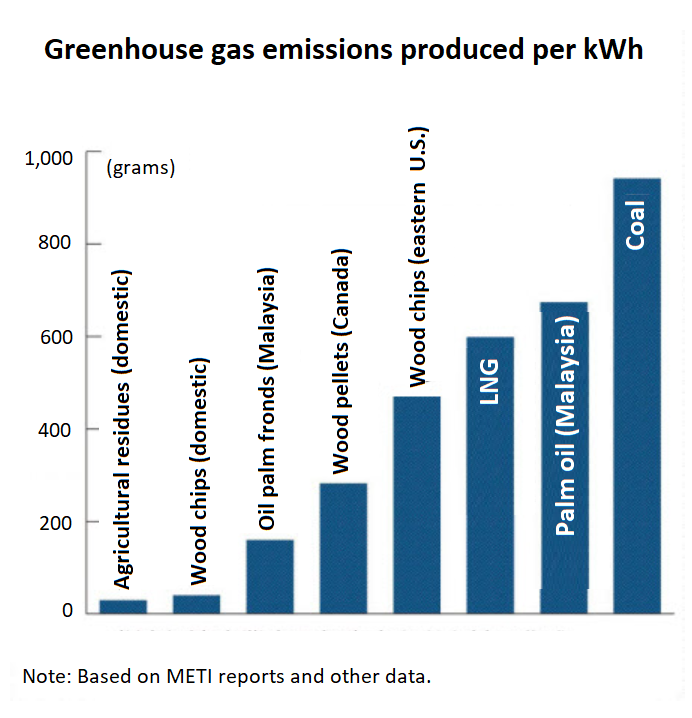 Biomass power generation harnesses plant-derived fuel and the government is backing biomass as a renewable energy, but some parts of Europe and the United States are not certifying biomass as a renewable. Some point out that forests’ absorption of carbon dioxide (CO2) will be reduced if trees are cut to create plantations to grow plants that can be used as fuel for power generation. Discussions are underway in Japan now, and the situation surrounding accreditation may change completely.

Forests are both biomass sources and carbon sinks, and they will be a key item on the agenda at the 26th Conference of the Parties to the United Nations Framework Convention on Climate Change (COP 26), which is set to open on Oct. 31.

Biomass uses biological raw materials, such as burnable garbage, food waste, and timber from forest-thinning, to generate power. Although CO2 is emitted in the burning of biomass, the CO2 is offset by that absorbed by the biomass plants during photosynthesis. For this reason, biomass is considered a renewable energy.

Biomass has been certified under the feed-in tariff (FIT) scheme, which was introduced with an eye to expanding renewable energy usage. Currently, Japan’s biomass power generation capacity is about 4.5 million kW, which is equivalent to the power produced by four or five large coal-fired power plants.

On Oct. 22, the cabinet approved the Basic Energy Plan, which provides Japan’s medium- to long-term energy strategy. With this, the government set the goal of raising biomass usage to 8 million kW in FY2030. In other words, the aim is for biomass to make up 5% of Japan’s energy mix, up from 2.6% in FY2019.

Biomass has become a mainstay of renewable energy. However, there are three main reasons why some have become skeptical about biomass.

The biggest issue is the question of fuel procurement. The Ministry of Economy, Trade and Industry (METI) and others envisioned using “timber from forest-thinning” in biomass as this would help develop the nation’s mountains and forests. The cost of harvesting this timber tends to be high, however. Over 70% of the power plants that have applied to use biomass (based on the scale of power generation and including plants that are not in operation) are expected to import fuel from overseas.

In September 2020, 17 nongovernmental organizations (NGOs) and other groups in the United States sent a letter of protest to METI and the Forestry Agency, saying that the biomass that Japan imports from the United States for power generation has a negative impact on the climate, forests, and local communities. In the United States, the letter pointed out, local companies are cutting down natural trees and exporting them to Japan and are not using timber from forest-thinning.

The second reason people are skeptical is the CO2 emissions created at times other than fuel burning. Methane gas is generated and greenhouse gases are emitted in processing palm fronds so they are easier to use to generate electricity. Emissions will increase further if the fuel is shipped overseas.

Impact on the ecosystem

The third reason for skepticism regarding biomass is the matter of biodiversity. Reportedly, there are cases overseas where oil palm plantations are created by cutting down forests. In Southeast Asia, forests are decreasing due to biomass power generation, and there are cases where orangutans are being forced from their habitats.

Europe and the State of California have already announced they will not recognize plant-fueled biomass power generation as renewable energy if it is sourced through deforestation that leads to an increase in greenhouse gases. In response to this situation, discussions have begun in Japan on how to handle the certification of biomass power generation.

Ritsumeikan University professor Hashimoto Seiji says, “Biomass emits greenhouse gases during production and transport. Biomass fuel that does not lead to emissions reduction should not be recognized as renewable.” The person in charge at METI commented on the certification system, saying, “The government will verify the certification framework and make improvements if any inadequacies are found.”

At a meeting of the METI expert panel in August, one of the panelists urged the review of the Japanese system, warning that “Japan’s certification will not be credible” unless it is in line with those overseas.

However, many power plants are already in operation or have been approved for FIT. The impact could be significant if criticism from Europe and the United States intensifies and the businesses are forced to review their operations.

If biomass is certified as renewable energy and yet increases greenhouse gas emissions substantially, it would run counter to the aims of FIT and the pursuit of decarbonization. Is biomass in line with achieving carbon neutrality by 2050? The situation must be verified continually.