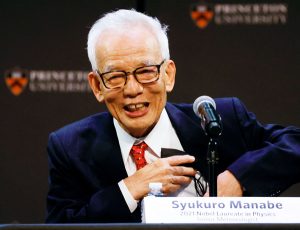 Syukuro Manabe, a Japanese-born meteorologist at Princeton University, received this year’s Nobel Prize in Physics with two other scientists for his work in helping the world understand the effects of global warming. The achievement was met with excitement in Japan, with Prime Minister Kishida Fumio, who once served as the minister of state for science and technology policy, directly congratulating Manabe via video conference. However, Manabe is also seen in Japan as a symbol of the scientists who left the country for better research environments overseas. Manabe moved to the United States after receiving his Ph.D. in meteorology from the University of Tokyo in 1958. He later obtained U.S. citizenship and has spent most of his life in the United States, where his cutting-edge research was fostered.

At a news conference held at Princeton University on Oct. 5, the day the prize was announced, Manabe was asked why he doesn’t return to Japan. “In the United States, I can do things I want,” he said. “I don’t worry about what other people feel. America is a wonderful place to concentrate on research.” He took a job at what was then the National Weather Service and is now the National Oceanic and Atmospheric Administration (NOAA) when he moved to the United States in 1958. His salary was 26 times higher than what he would have earned at a similar Japanese agency at the time. Manabe recalled his days at NOAA with fond memories, saying: “My bosses were generous enough to allow me do anything I liked. They never pushed me to produce short-term results. They renewed my contract even though I didn’t achieve notable results for nearly ten years. I was afforded lavish funds that allowed me to use supercomputers to simulate global climate change.” 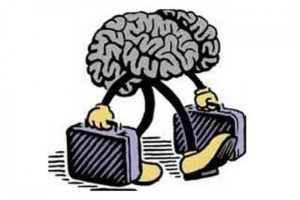 This is what young Japanese researchers in a variety of fields are desperately seeking: better research environments. But the postdoc brain drain is becoming a serious problem in view of the phenomenon’s impact on economic security. Nikkei (9/3) wrote that for Japanese scientists, China is increasingly attractive as a place to pursue scientific research. The Chinese government proactively invites top-caliber scholars from Japan and elsewhere, while Japanese academics, especially young ones, often have trouble finding posts at domestic universities and other academic institutions. Tokyo University of Science honorary professor Fujishima Akira, who is seen as a potential candidate for the Nobel Prize in Chemistry, transferred his research base to the University of Shanghai for Science and Technology in August. This came as a shock to Japan. Nikkei pointed out the urgent need for Japan to improve its treatment of scholars to apply the brakes to the exodus of critical talent. 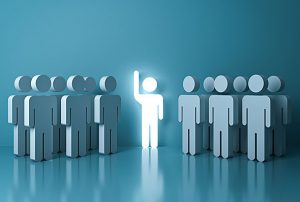 However, the shortage of stable research funds and posts is not the only reason for the brain drain. Manabe also said at the news conference: “I don’t want to go back to Japan because I’m not capable of living harmoniously with others.” Although the audience took these words half in jest, he may have been expressing his desire to be free from peer pressure in Japan, where people tend to place a higher value on reading the room than speaking one’s mind. For a researcher who dared to achieve the unprecedented with unique ideas, Japan may not have been a good fit.

TV Asahi’s weekday morning news show (10/15) also took up the issue of Japan’s brain drain, concluding that visionaries like Manabe eschew Japanese harmony for American candor. The show highlighted several talented Japanese who left the bubble of conformity in Japan. All of them said they completely understood Manabe’s decision to leave for the United States. Masuda Naoki, a professor at the Department of Mathematics of University at Buffalo, said he went to the UK after receiving his Ph.D. from the University of Tokyo and later took his current post so he could pursue his career in a better research environment. He is fully satisfied with his current environment, which offers him sufficient research funds and better living conditions, including education for his children. 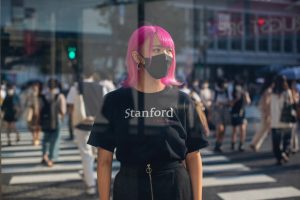 Hirotsuru Sumire, a violinist, writer, and entrepreneur, earned a B.A. from Harvard University in 2016 and an M.M. from the Juilliard School in 2018. She said she has been able to expand her horizons in the United States because people speak their minds freely there. Matsumoto Anna enrolled at Stanford University this fall to study human-computer interaction. She said she felt out of place in Japan due to her nonconformist attitudes. She was worried about how her professors and classmates at Stanford would react to her neon pink hair because it had made her high school teachers and classmates frown in Japan. But she realized she didn’t need to worry about such things in the United States when she spotted in one of her classes a student with hair the colors of the rainbow.