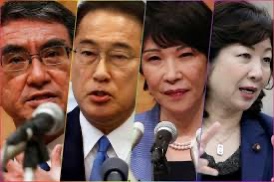 he recent LDP presidential election, which was effectively a race to select the next prime minister, gained a lot of media attention, partly because two of the four contenders—Takaichi Sanae and Noda Seiko—were female. Although neither was elected, the race offered a glimmer of hope that Japan might have a female leader one day. Asahi (9/20) noted that during the election campaign, the candidates talked about measures to reduce the gender gap that had not been fully addressed in past LDP presidential elections, such as allowing separate surnames for married couples and filling half of the Cabinet posts with female lawmakers.

During a debate among the four candidates on women’s participation in politics, Takaichi said: “It was tough enduring attacks via anonymous documents rife with sexually offensive language.” She explained that female politicians are often sexually harassed by voters during the election campaign and on social media. She pledged to work to strengthen measures against this kind of behavior, including taking legal measures, to support female candidates. Noda proposed holding Diet meetings and votes online, saying: “It’s impossible to attend a division meeting at eight in the morning when we have to get our kids ready for school.”

Asahi wrote that the only time a female lawmaker had run in the LDP presidential race in the past was in 2008 when Koike Yuriko, now the governor of Tokyo, threw her hat in the ring. Takaichi said during a press conference on Oct. 8 that when she launched her political career 30 years ago, people would ask her, “What can a woman do in the Diet?” But she went on to say, “The public’s understanding of women in national politics is different from 30 years ago.”

However, if you look closely, the male-centered mentality still runs deep in the LDP. In order to compete in the party presidential race, candidates need to have been elected multiple times and served in key party positions and cabinet posts. Whether they can obtain the required support of 20 lawmakers for their candidacy also depends largely on whether they have the backing of a party faction. One female lawmaker says: “It’s difficult to run in the party presidential race unless you can gain the favor of senior faction members.” Although Takaichi doesn’t belong to a faction, she is close to former Prime Minister Abe and most of the 20 lawmakers who supported her candidacy were members of the Hosoda faction, which Abe is the de facto leader of. Noda, who is also unaffiliated, had tried to run in the party presidential race three times in the past but failed to secure 20 supporters each time. This time she was finally able to enter the race after clinching the support of the Nikai faction because she supported then-Secretary General Nikai as the executive acting secretary-general. Noda said at the election debate: “I’ve finally made it onto the stage. As a woman, I’m a minority, and I also don’t belong to a faction.”

When a parliamentary league on supporting female lawmakers asked then-LDP Secretary General Nikai in March to increase the number of female lawmakers assigned to senior party positions and raise the percentage of female candidates, Nikai’s response was to approve female lawmakers’ “attendance” at senior party executive meetings. A senior party member caused a stir by saying that such female lawmakers are merely “observers.” A veteran lawmaker also points out that the party’s supporters, who also have the right to cast votes in the party presidential election, are mostly men. The lawmaker says: “Support for women among general voters and support for women in the LDP are two different things.” Concerning the male dominance of the LDP, Koike quipped at a press conference on Oct. 10: “I wonder why women’s empowerment has lagged so far behind even though there’s no Taliban in Japan.”

The fact that Japan is lagging the rest of the world in gender equality in politics has been well documented, and this problem affects not only the LDP but also the Japanese parliament. According to this year’s World Economic Forum Global Gender Gap Report, Japan ranks 120th among the 156 nations listed. In the area of politics, Japan’s ranking sinks to 147th. This is because the ratio of female lawmakers in the Lower House and the Cabinet remains low. Among the 461 Lower House members before the chamber was dissolved on Oct. 14, only 47, or about 10%, were women. As for the LDP alone, there were only 39 women among the 384 LDP members in both chambers. Only three of the 21 members of the current Kishida Cabinet are women, one more than the two in the Suga Cabinet.

A supra-partisan group of lawmakers focusing on promoting women’s empowerment in politics has been working to obligate each party to increase the proportion of female candidates they field in elections but has failed to do so partly because of strong opposition from the LDP. When Lower House Speaker Oshima called for a survey of gender equality in the parliament, such as whether each political party is adopting a quota system, senior ruling party members rejected the idea by saying: “Quota systems cannot be easily implemented in single-seat constituencies.”

Raising the percentage of female candidates in the upcoming Lower House election has been a challenge not only for the LDP but also for opposition parties. The CDPJ announced in July that it would raise its proportion of women candidates, party lawmakers, and party workers to 30% by 2030. However, among the current CDPJ candidates, only 17% are women.

Sophia University Professor Miura Mari points out that the problem lies in the process of endorsement by political parties. “Potential candidates are judged based on the extent to which they can engage in ‘grassroots’ election campaigning, such as attending local meetings, drinking sessions, and festivals. Women are busy raising children and doing housework, so they tend to be excluded from male-centered communities.” Unless the number of female lawmakers increases, the likelihood of a woman taking the helm of the LDP remains low. “Women who aspire to be leaders have to choose between maintaining the male-centered political system or forging a new path for women,” Miura says. “Their determination is being tested.”