TOKYO — Japan’s Liberal Democratic Party will be tested on whether it can maintain another clear majority by winning more than 233 seats in lower house elections set for Sunday, according to the latest Nikkei poll. Results of the survey mirror those of last week.

The elections held on Oct. 31 will be the first since LDP leader Fumio Kishida was elected Japan’s latest prime minister. Together with coalition partner Komeito, the LDP is poised to at least hold onto power. The Japan Restoration Party is expected to gain seats and compete with Komeito as a third party.

The second Nikkei poll follows a two-day survey that began on Oct. 19, the day the election was announced.

In a telephone poll conducted nationwide on Tuesday and Wednesday, about 10% of voters were still undecided in single-seat districts and 13% in districts with proportional representation.

Nearly 60% of single-seat districts either favored or showed a high probability of an LDP win, marking a slight increase compared with the previous poll. But in proportional districts, the LDP’s earlier advantage is slipping, casting doubt on whether the party will be able to keep all 66 seats it held in those districts.

The LDP’s chances of securing a 233-seat majority as a single party depend on close races in about 40% of single-seat districts. The LDP held 276 seats prior to the dissolution of the lower house on Oct. 14. 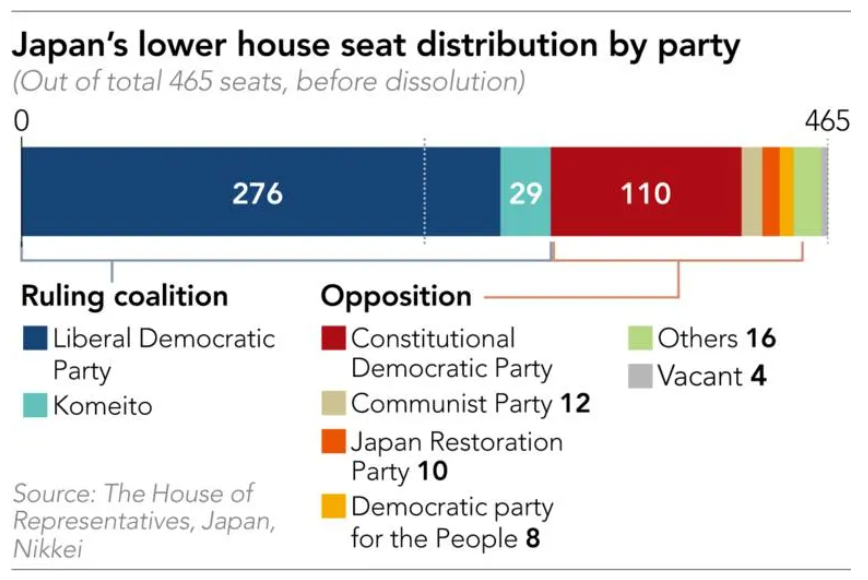 Since returning to power in 2012, the LDP has won over 60% of lower house seats in all three elections. But there is a chance it may lose some of those unless it polls higher in about 70% of districts where opposition candidates are running strong.

If the party loses 44 seats, the resulting coalition could prove problematic for the Kishida administration.

Komeito is likely to remain unchanged at 29 seats.

Opposition parties have cooperated in the election by backing a single candidate in single-seat districts. Many such districts are competing with ruling party candidates even in the final stages of the campaign.

The Constitutional Democratic Party — the LDP’s main rival — is likely to win more seats than the 110 it held before the election. There has been little change in its polling numbers since the early stages of the campaign.

Meanwhile, the CDP will increase seats if it can win in closely fought constituencies. But it is still unclear whether the party can maintain the 62 seats of proportional representatives it held previously.

The Japanese Communist Party has a fighting chance to increase its number of seats from its previous 12 by polling strong via proportional representation.

The Japan Restoration Party is expected to nearly triple the number of seats from its previous 11, as it remains strong in single-seat districts, particularly in its hometown Osaka. It has also been gaining in districts with proportional representation.

Cartoon: A cynical view of IPEF