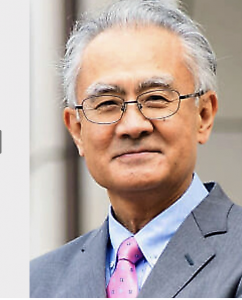 It has become increasingly difficult for Japan to formulate a security and diplomatic outlook. What should be done amid the U.S.-China conflict? How likely is it that the disputes over the Taiwan Strait or the Korean Peninsula will trigger an armed conflict? Today, cool-headed analysis is more crucial than ever.

Ishii Masafumi: Although there are budgetary constraints on how much can be allocated to defense, the U.S.-China conflict is a serious matter, and some are pointing to the possibility of a Taiwan invasion by China. Even if it were difficult to immediately double Japan’s defense spending, it would be possible to achieve a 1.5-fold increase by 2050. When strengthening our defense capability, it is important to indicate the future direction. The government should draw up a long-term plan as well as a timeline toward achieving the goal.

Asahi: Do you think the Japanese people will agree to a defense budget increase?

Ishii: It is vital for the government to explain to the people that the increase is not for waging a war, but for avoiding one. The enemy would advance if it detected weakness. While remaining defenseless could invite a military conflict, being prepared would discourage the enemy. It is absolutely necessary that we prepare ourselves now.

Asahi: Is a Taiwan contingency imminent?

Ishii: I don’t believe so. If China invaded Taiwan in near future, I would be extremely surprised. The Chinese Communist Party (CCP) places high priority on the legitimacy and preservation of its governing system. A Taiwan contingency would pose a high risk for China and could undermine the CPP’s legitimacy. If you were to ask me whether the time is approaching for China to take that step, my answer would be no.

Chinese leader Xi Jinping described the Taiwan [unification] as “historic mission” in his speech at the CCP’s 100th anniversary. However, it is highly unlikely that China would move to invade Taiwan soon if it weighed the risk and benefits of doing so. Of course, the premise is that the CCP would risk getting hurt if it moved to invade Taiwan. The Japan-U.S. security alliance’s deterrence capability plays a very important role in maintaining that premise.

Asahi: Isn’t there a risk that an accidental clash would trigger a bigger conflict?

Ishii: Communication is important for that reason. We must prevent each other’s intentions from being misinterpreted or an accidental clash from developing into a military clash. If a Taiwan contingency occurred, it would instantly become a Japan contingency. The U.S. bases in Okinawa and elsewhere could become targets of an enemy attack. If a war were to break out, no one would win.

Asahi: Japan is trying to strengthen coordination in the international community through the free and open Indo-Pacific initiative and other venues.

Ishii: Protecting important sea lanes is of utmost importance to Japan. To achieve this, cooperation with friendly nations along sea lanes is indispensable, from the Middle East through the Indian Ocean, and the South and East China Seas. Likewise, cooperation with European nations should be secured in the Western Indian Ocean. Japan is working to coordinate actions with other nations to maintain a rule-based order in the aforementioned regions and protect sea lanes.

Asahi: Is this China containment?

Ishii: It’s impossible and impractical to try to contain or confine China. Instead, a region-wide safety net should be cast in coordination with the U.S., Australia, India, and members of the Association of Southeast Asian Nations (ASEAN) to fill the void left by the relative decline of the U.S.

Asahi: The Trans-Pacific Partnership Agreement (TPP) is another focal point in dealing with China.

Ishii: The TPP is not China containment either. Rather, the ultimate goal of the pact is liberalization of China. It will benefit Japan to enter the Chinese market after China adopts international trade rules. Now that it has submitted an application to join the TPP, China may try to influence the current members to change the rules of the pact, but we should never lower a hurdle to accommodate China.

Asahi: What should Japan’s diplomatic focus be?

Ishii: The core theme of Japan’s diplomacy is how to deal with China. We should try to reap benefits from relations with China, while remaining independent from its influence. With the backing of the Japan-U.S. alliance, Japan should say to China what needs to be said and not be pressured by it. At the same time, it is meaningful to seek policy solutions for shared concerns together with China. They include environmental issues and challenges of aging population. We should pursue coexistence as well as competition.

Asahi: Is there a way for Japan to pursue a unique diplomacy regarding nuclear disarmament?

Ishii: Japan can solicit international cooperation to prevent nations from increasing their nuclear weapons. Nuclear arms could be frozen and then decreased. The U.S. and Russia may be able to agree on this process. If the UK and France could be convinced as well, we would be able to exert pressure on China, which is increasing its nuclear arms. Our goal is to move toward denuclearization, while chipping away at China’s nuclear capability.

Ishii Masafumi, born in 1957, is a special visiting professor at Gakushuin University specializing in international law. Ishii was director-general for international legal affairs at the Ministry of Foreign Affairs and Japanese Ambassador to Indonesia. Ishii also served as Japanese Ambassador to Belgium and Japanese Representative to the North Atlantic Treaty Organization (NATO) concurrently.