Commentary: Can the CPTPP change China, or will China change it?

TOKYO — China’s request to join the Comprehensive and Progressive Agreement for Trans-Pacific Partnership (CPTPP) trade pact has divided observers between those who see it as a valuable opportunity to encourage economic reform, and those, including this reporter, who believe that members should proceed with caution.

The first camp argues that the conditions for joining the CPTPP are quite detailed and stringent, providing little wiggle room for exceptions for China. Given this, the thinking goes, engaging with the Chinese bid could prod Beijing to set fairer, more transparent rules.

The door should not necessarily be shut in China’s face — if CPTPP members can stick to the principle of refusing exceptions to the pact’s standards and Beijing agrees to move forward under these conditions.

But going down this path requires, at a bare minimum, careful preparation and unity among CPTPP members.

And even then, negotiating with an economic superpower like China carries no small amount of risk.

The biggest concern is that it is still unclear whether Beijing applied with the intention of trying to fully meet the CPTPP’s standards. Even diplomatic sources and experts familiar with discussions within President Xi Jinping’s government disagree regarding how sincere it is on this point. Chinese President Xi Jinping applauds at a meeting commemorating the 110th anniversary of the Xinhai Revolution at the Great Hall of the People in Beijing on Oct. 9.   © Reuters

Some say the idea is to leverage the CPTPP as outside pressure to force economic reform, pointing to recent changes to government procurement practices and labor standards as examples.

Others contend that China went into the application process intending to seek exemptions from CPTPP requirements from the outset. The country ranks 107th on the Washington-based Heritage Foundation’s Index of Economic Freedom, well below CPTPP members’ average of around 30.

The pact requires members to significantly loosen restrictions on cross-border data flows and end forced labor and special treatment for state-owned enterprises. Xi’s policies have run counter to this.

“During negotiations on China’s entry into the World Trade Organization, there were many who believed that outside pressure would bring its economic system closer to those of Western countries,” said Wu Junhua, research director at the Japan Research Institute.

“But China is now brimming with confidence that its economic model is superior,” Wu said. “Rather than bringing itself closer to the CPTPP’s standards, it may be planning to pull the CPTPP closer to it by carving out exceptions.” 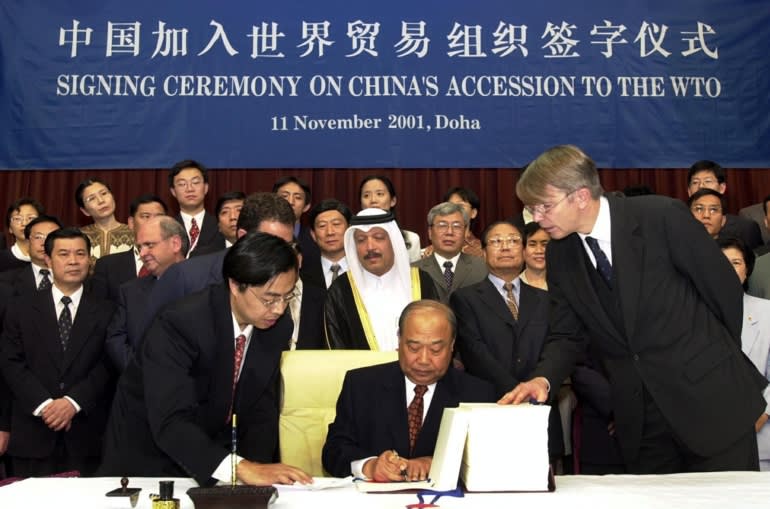 Then-Foreign Trade Minister Shi Guangsheng signs the membership document at the signing ceremony for China’s accession to the WTO in Doha on Nov. 11, 2001.   © Reuters

The Xi administration has already begun wooing CPTPP signatories, securing support or welcomes for its application from Singapore, Brunei, Mexico and New Zealand.

Still, the CPTPP is designed not to allow such exceptions. Joining the bloc would require China to agree to meet all of its requirements and to submit a detailed action plan on areas where it falls short.

The CPTPP granted grace periods to its 11 current members for meeting certain obligations. According to a senior trade official of a member nation, member states have agreed not to do the same for new entrants.

But the CPTPP does allow for exceptions to the agreement’s rules for “essential security interests” under Chapter 29, Article 2.

How far “essential” extends is for practical purposes left up to each member country. To avoid surprises, existing members will need to demand that China disclose the extent of its national security interests with respect to the CPTPP.

Taiwan submitted its application to join the CPTPP soon after China made its move. As an economic agreement, the pact imposes no barriers to the island’s membership. Taiwan ranks sixth in the Heritage Foundation’s Economic Freedom Index. It is also a WTO member.

Taiwan’s membership bid should be discussed with China, with the aim of an assurance that it will not block the island’s entry.

If China accepts all of the CPTPP’s terms and becomes a member, the impact on geopolitics in the Asia-Pacific region would be profound — especially in the absence of the U.S. Members need to start considering this scenario now to have a truly thorough debate on Chinese membership.