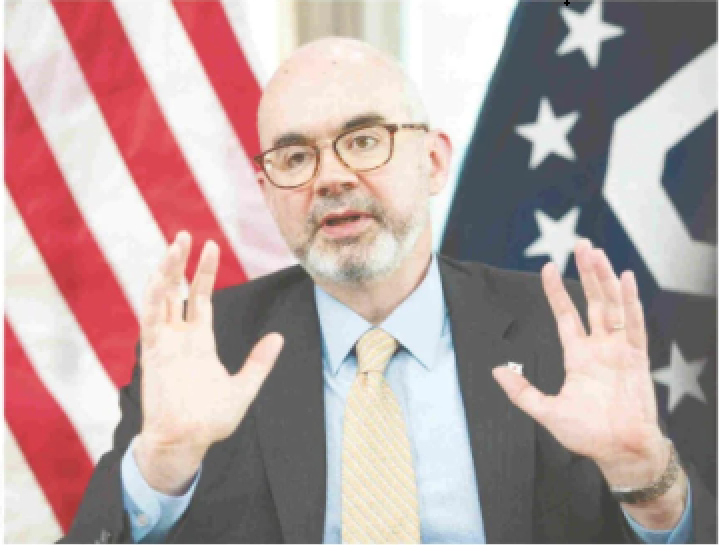 The environment surrounding Japan is growing increasingly harsh with China’s rising hegemony and North Korea issues. Ties with the United States have been the core of Japan’s foreign policy in the past. How will those ties develop going forward? Raymond Greene, known as a Japan hand, took office as the U.S. Chargé d’Affaires ad interim in July. The Yomiuri spoke with him about the United States’ economic strategy for Asia.

Japan-U.S. ties are stronger than ever before and carry a significance unlike that in the past for the international community, too. Our countries must jointly demonstrate leadership in relation to environmental issues and infectious diseases as well as the heightening tensions surrounding the South China Sea and Taiwan.

By joining hands, our two nations can contribute to a wide range of areas, including building resilient supply chains and developing new green energy technologies.

Addressing the issues facing the international community requires collaboration among partners that share basic values. One example of this is the Quad framework that brings together Japan, the U.S., Australia, and India. We must build a free and open Asia Pacific that is based on rules.

Ensuring that our businesses can engage in fair competition is a central part of America’s China strategy. We share the recognition with Japan and other partners that China needs to correct its stance on trade, climate change, and security.

It is hard to envision the U.S. returning to the Trans-Pacific Partnership (TPP) or other multilateral trade pacts anytime soon, but America will promote coordination with likeminded trading nations on key economic priorities in the 21st century such as the digital economy.

Another important issue is responding to China’s initiative to support infrastructure development in emerging economies.

The Blue Dot Network, a framework spearheaded by Japan, the U.S., and Australia to support infrastructure development [in emerging nations], has made clear that it offers sustainable projects and has no intention of exploiting the recipient nations. Through this framework, we aim to offer up-and-coming nations a sustainable alternative.

Confident in the success of 2025 Osaka Kansai Expo

The 2025 Osaka Kansai Expo will be a major growth opportunity for Kansai. The U.S. has officially announced it will participate in the world exposition. The two nations’ governments and U.S. companies and Kansai corporations will be able to showcase the outcomes of their collaboration in the life sciences and other fields.

Japan and the U.S. face the same challenges, such as addressing infectious diseases and global warming, and there are many areas where we can fruitfully engage in cooperation. Japan held a successful Tokyo Olympic and Paralympic Games, and the world expo will undoubtedly be a success as well.

Japan and the United States share a vision for economic growth in the future, and large-scale investments are being made in both directions. Our collaboration in decarbonization and environmental fields in particular is one of our most promising initiatives.

We aim to advance collaboration so that we can develop technologies that ensure not only that we achieve our nations’ goal of net zero CO2 emissions but also that we can help third countries, such as Indonesia and India, reach the goal as well.

Interest has shifted back to Japan

The COVID-19 pandemic essentially halted travel by our scholars, students, and ordinary visitors to each other’s nation, and we are now consulting with the Japanese government about how to restore travel to normal.

In recent years, American students interested Japan have increased in number like never before. Over the past 20 years or so, many young Americans have been interested in China, but interest is shifting back to Japan. This is because people are recognizing afresh the importance of Japan and the U.S. as partners.

The population decrease in Japan is serious but there is a clear solution: increase the percentage of women in the workforce and prioritize diversity and inclusivity. Diversity in the workforce will be a new engine of growth for Japan. If Japan and the U.S. deepen their collaboration and make great advances in their ties, it will be beneficial for the people of both nations.

Raymond Greene is a member of the U.S. State Department’s Senior Foreign Service and has served as Director for Japan and East Asian Economic Affairs at the U.S. National Security Council. This is his fourth time to serve in Japan. As U.S. Consul General in Okinawa, Greene played a critical role in Operation Tomodachi, the American forces’ aid effort following the Great East Japan Earthquake. He hails from the State of New York and is 50 years old.

In addition to the embassy in Tokyo, the United States also has consulates in five other locations in Japan, including Osaka City. The Ambassador is often a political appointment of someone with close ties with the President. President Joe Biden has nominated former Chicago Mayor Rahm Emanuel. Until the Ambassador takes office, a career diplomat performs the ambassadorial duties as the Chargé d’Affaires ad interim. 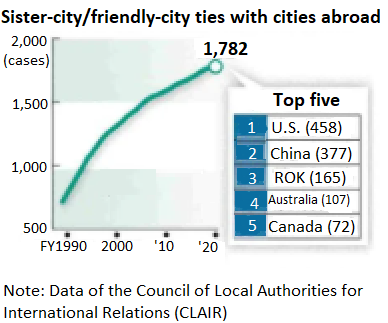 Pro-Japan specialists, known as Japan hands, have exerted a certain level of influence on America’s Japan policy and Asia Pacific strategy. One example of this is the 1995 “East Asia Strategic Report.”

This report—also known as the “Nye Report” named for then Assistant Secretary of Defense Joseph S. Nye, Jr.—called for strengthening the post-Cold War Japan-U.S. alliance and, based on that, proposed the Asia Pacific strategic concept. The report has been the basic policy for Japan-U.S. relations since then.

The two countries also share dynamic exchange at the grass-roots level. Nagasaki and St. Paul (Minnesota) formed sister-city ties in 1955, and today the two nations share a total of 458 sister-city relationships, including the ties between Osaka and Chicago (Illinois). Japan has 377 sister-city ties with China, dramatically fewer than it shares with the U.S. although China is Japan’s second largest partner in these grass-roots ties. Looking toward the future of Japan-U.S. exchange, Chargé Greene says, “We are entering a new phase of strengthening our partnership.” “We need to develop a new generation of Japan hands who are well versed in scientific and the economic fields,” he continued.

Kansai has engaged in its own exchange with the U.S. over the years. For example, Kansai Association of Corporate Executives [Kansai Keizai Doyukai] holds the U.S.-Japan Symposium with Harvard University, and this year’s gathering marked the 29th in the series. We look forward to the early restart of travel between our two countries particularly by students after this period where movement has been restricted due to the pandemic.