By Kokubun Ryosei, former president of the National Defense Academy

I once inspected waters around the Senkaku Islands in Okinawa Prefecture aboard a patrol plane of the Maritime Self-Defense Force (MSDF). What I saw there was a Japan Coast Guard (JCG) patrol vessel and a China Coast Guard vessel raising whitecaps as they faced off against each other. This left me with the impression that tension is growing on the frontlines.

China has substantially increased the number and capabilities of its vessels and military aircraft. It is trying to gain better access to the East China Sea by keeping Japan’s attention focused on the Senkakus. We should assume that China is aiming to take control of the entire East China Sea, not just the Senkakus.

China is putting pressure on the U.S. military so that the Self-Defense Forces will become isolated. If this continues, the East China Sea could become a Chinese sea. Deterrence capabilities must be enhanced. Although Japan has been deploying more missile units to the Nansei Islands, it also urgently needs to respond to cyber and other high-tech warfare.

The U.S. military’s presence is growing increasingly important. The key will be whether the SDF can cooperate with the U.S. military in a substantive way. Japan needs to maintain its deterrence capability while pursuing strategic diplomacy. It will be required to build networks centered around the U.S., including the Quad framework of Japan, the U.S., Australia, and India.

China’s warnings against the U.S. military are intended to give it the upper hand when dealing with Taiwan and other issues. There are reasons why China keeps mentioning the Taiwan issue. Reunification with Taiwan is China’s top national policy. The Chinese leadership can be better united if a degree of tension is maintained.

The biggest problem for China is politics. The problems China is facing right now are related to the establishment of a power base by Chinese Communist Party (CCP) General Secretary and Chinese leader Xi Jinping, who will seek a third term in office in the party congress to be held next autumn. The biggest problem for the CCP, which has a history of 100 years, is that it has no system in place for deciding the successor to the supreme leader. That is causing power struggles over interests and personnel affairs. This structure has largely remained the same since the era of Mao Zedong. The history of Chinese politics is characterized by power struggles.

Based on remorse over Mao’s dictatorship, Deng Xiaoping abolished the permanent party presidency and imposed a two-term (10 year) limit. Since the CCP adopted the reform and opening-up policy, China has promoted institutionalization based on rules and law. Xi is violating the most important policy of imposing a term limit on the party leader and has been aggressively pursuing a third term. A high-handed political system that disregards social reality will eventually collapse. The Xi government is not eternal.

At a general meeting of the Central Committee in November, the CCP will discuss a “resolution on history” to sum up the 100th anniversary of its founding. Such a resolution will be adopted for the first time in 40 years, but has Xi made any historic achievements in the past nine years? China is seeing the peak of its economic growth pass, suppressing Hong Kong by force, and poorly handling the Belt and Road initiative to create a huge economic zone as well as relations with Europe, the U.S., and Japan. Also, Xi’s anti-corruption campaign is essentially a power struggle.

Xi will face major challenges after securing a third term. The stagnation in economic growth has created disparity among middle-income earners and increased the number of people who can’t receive benefits. China is aware that their mounting dissatisfaction is a destabilizing factor for maintaining the regime.

That is why Xi underscores “common prosperity” for everyone. He may be thinking that the only way to make everyone better off amid the slowdown in economic growth is to have overwhelming authority and suppress discontent by force.

A power struggle is inevitable before a party convention. I am sure that tight controls on the major IT firm Alibaba Group and the financial crisis of major property developer China Evergrande Group are related to power struggles. Major Chinese private companies are invariably connected with political forces.

In China, politics are currently focusing on domestic affairs and the country is not very concerned about what the international community thinks. Globally-minded members are not rated highly in the CCP leadership.

China is shifting its diplomatic strategy to focus on stronger ties with the “middle-income developing countries” emerging in the rest of Asia, Africa, and South America to prepare for a post-COVID-19 world. These countries share interests but not ideologies with Beijing and rarely criticize China for its handling of human rights. They may be thinking that an authoritarian system is more advantageous for governance than democracy, which can’t respond to situations swiftly.

There are quite a few non-democratic nations in the world that enjoy friendly relations with China. So conducting diplomacy based on universal values alone is not sufficient. Japan will be required to conduct  more strategic and thoughtful diplomacy. There are many countries that are experiencing difficulties in their relationships with China. Japan also needs to deepen its ties with such countries.

China’s diplomacy toward Japan is affected by its relationship with the U.S. When its ties with Washington are strained, it approaches Japan without bringing up the historical perception issue. In recent years, Japan demonstrated its emphasis on the alliance with the U.S. and took a firm attitude. So China seems to have given up the idea of separating Japan from the U.S. What China expects is hoping for is weaker ties between Tokyo and Washington.

Japan needs to conduct diplomacy toward China by standing on the side of its American ally, which is the cornerstone of security. The SDF and the U.S. military have deep ties, so the unity of the Japan-U.S. alliance should not be weakened. It is unrealistic to engage in diplomacy that keeps the U.S. and China at an equal distance.

It may be difficult for Xi to visit Japan as a state guest next year to mark the 50th anniversary of the normalization of Japan-China diplomatic ties. But the anniversary may be an opportunity for the two countries to hold a summit meeting on the sidelines of an international conference, for instance. The summit is expected to run into difficulties because there are so many issues of contention, but dialogue becomes all the more important when bilateral relations are strained. The future Japanese-Sino relationship may depend on the U.S.-China conflict and the progress of dialogue progress between them.

Foreign countries will only end up being ignored by or drawing fire from China if they criticize it. It will be effective to directly tell China what it needs to be told. Criticism should be focused on economic issues that China can be convinced of and compromise on. Japan also needs to make reciprocal suggestions in addressing environmental issues. Japan should tenaciously and calmly exchange opinions with China. China may look like it is responding emotionally, but it is actually cool-headed and prioritizes actual benefits.

What matters is intelligence (gathering and analyzing information) to accurately understand what China wants and what it is afraid of. I think emotionally charged arguments on whether we like or dislike China are premature and could weaken Japan’s ability to develop a strategy toward China through cooperation by government organizations, private companies, and researchers.

Economic security is one of the major themes in international politics. The government will be tested on its ability to achieve a balance between corporate profits and national interests and convince companies that actions that are conscious of economic security with China will be beneficial to them in the long run. Companies will also be tested on whether they can enhance consciousness. We need something that connects the two sides.

I wrote earlier that globally-minded members are not rated highly in the CCP leadership. But that is not true in the spheres of education and research, which are responsible for China’s future. There are many internationally-minded young Chinese people. They are not necessarily science students. Many of them are humanities students, including those majoring in contemporary Chinese studies, which is the area of my specialization. I think there are many talented human resources that were not generated by the current Chinese system but studied in the U.S. and other free-thinking foreign countries.

Competition is intense at Chinese graduate schools and research institutions. Recruitment and promotion there are decided based on the number of theses published in international academic journals, so scholars and researchers are required to compete in the global arena.

In Japan, however, fewer young people are trying to compete on the international level. It would concern me if the entire society, particularly young people, were to grow inward-looking. 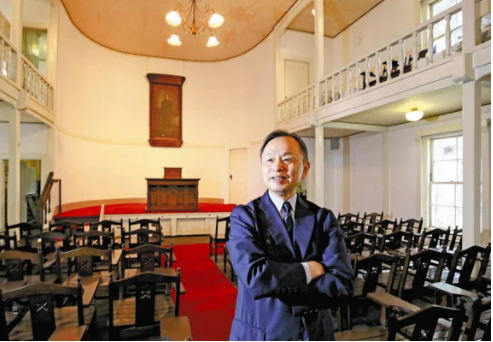 Kokubun Ryosei, former president of the National Defense Academy, stands at the Mita Speech Hall of Keio University in Tokyo’s Minato Ward. “Most of the problems China is currently facing are global issues,” he says. “It is important to turn our eyes toward these problems to discuss them.” (Photo by Suzuki Ryuzo)