TOKYO — Japanese entrepreneurs who address social issues through business in developing countries are adapting to defy the fallout from the pandemic.

Riho Kawaguchi is the CEO and designer of Cherie Coco, a Yokohama-based company that employs single mothers in Benin to make clothing for sale in Japan.

In early October, Agognon Emilienne, who works at a sewing studio in the village of Adjohoun — some 13,000 kilometers from Japan, was getting online instructions from Kawaguchi on operating a pedal sewing machine to make skirts from traditional fabric called pagne.

Kawaguchi founded Cherie Coco in 2015 with a local partner to support single mothers she had met while living in Benin as a volunteer under a Japan International Cooperation Agency program. She raised money through crowdfunding to buy sewing machines and build the studio, and incorporated Cherie Coco in May 2017.

Cherie Coco is a social enterprise that aims to solve social problems through business. Such enterprises can better provide longer-term support than governments or conventional companies that extend temporary help because they generate profit to enable operations to continue. Some provide domestic services, while many others work to help eliminate poverty and improve education in developing economies. Cherie Coco was set up in 2015 with a partner in Benin to support single mothers there. (Photo by Jun Suzuki)

Kawaguchi used to spend about six months a year in Benin to oversee the whole production process from selecting the fabric to cutting to sewing. But traveling became virtually impossible during the pandemic, forcing her to work remotely from Japan. With logistics disrupted, the company had to do business only with inventories in Japan for some time.

She uses video links and other forms of technology to help her check fabric patterns from digital images sent from Benin.

Cherie Coco produces items such as “yukata” summer kimono and pagne skirts in Benin and sells them online or at department stores in Japan. The company has also launched a new business model, making non-fabric products such as smartphone cases in Japan and using the proceedings to support education in Benin.

“We want to expand our operations to projects supporting children and other fields,” she said. 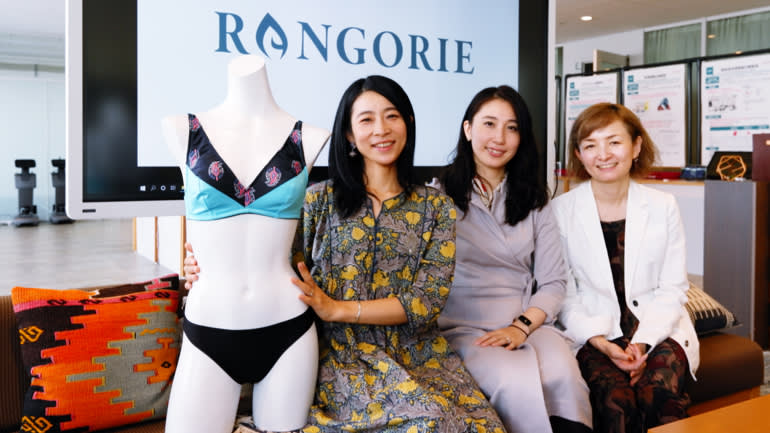 Rangorie, which designs women’s underwear for the Indian market, has shifted its sales target to Japan as a result of the pandemic. (Photo by Jun Suzuki)

Rangorie, a program that designs women’s underwear for the Indian market, is another enterprise that has significantly changed its business model.

The project had started test sales in Mumbai ahead of its official launch but decided to temporarily change tack in the summer of 2020 as the pandemic raged. While keeping its production base in India, the target market was shifted to Japan.

Rangorie’s aim, as a project selected for Ricoh’s entrepreneurship program Tribus, is to create jobs for women. Thinking it a waste that working-age women were not employed, co-founder Ryoko Ezoe came up with the idea based on her experience in a farming village in Bihar State, where she stayed in 2010.

Rangorie has not given up on selling the items in India and aims to enter the market with Japanese quality. “We will start with online sales to Indian consumers, then gradually make inroads into the market,” co-founder Saki Wataishi said.

Social enterprise is a major theme at business schools in the U.S. and Europe. Harvard Business School has been researching ways to solve social issues through business since the 1990s.

“Technological innovations that take advantage of information technology is instrumental to resolving complex social problems,” said Professor Tsuyoshi Kanamori of Sagami Women’s University. “The worldwide progress in digitalization during the pandemic provides a chance for growth for social enterprises.”