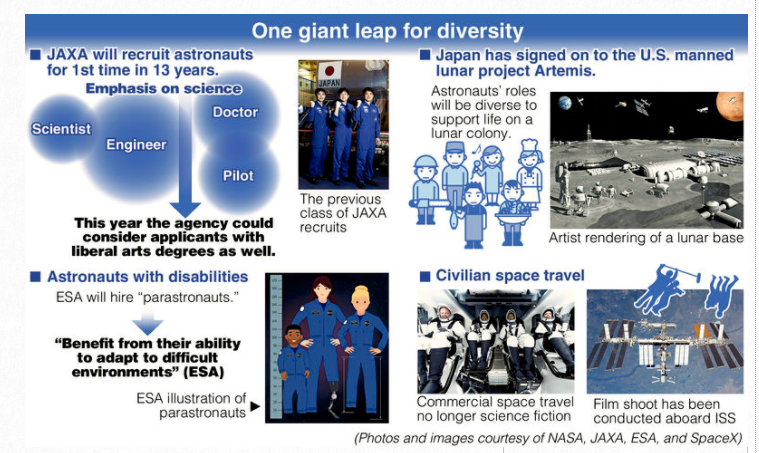 That liberal arts degree could soon be good for a career in outer space.

The Japan Aerospace Exploration Agency (JAXA) is considering accepting applications from aspiring astronauts with not only science but also liberal arts backgrounds this autumn, with the aim of boosting the diversity of their talent pool in the first new wave of recruitment in 13 years.

By opening a door to those without science qualifications, the national space agency can also be seen taking a step toward the next generation of space exploration and lunar base development.

Most astronauts in Japan have had a background in engineering or medicine.

Over the past five rounds of astronaut recruitment, JAXA has sought candidates with a strong footing in the sciences needed to run experiments and maintain the specialized systems onboard the International Space Station (ISS).

But renewed interest in lunar exploration has prompted the agency to consider broadening the scope of academic qualification, in the interest of rounding out its crews with the soft science skills that could come in handy on increasingly diverse missions.

Japan has signed on to the U.S.-led manned lunar Artemis program, and the new generation of recruits may be involved in the construction of a lunar base in the not-so-distant future.

Survival on these long-term missions in the harsh environment of space will test the full scope of mankind’s knowledge, on both sides of the great divide between the sciences and humanities.

“Any team would be made stronger by astronauts who can contribute diversity,” said astronaut Koichi Wakata, 58, a former commander of the ISS.

Diversity is fast becoming a keyword at space agencies across the world.

Earlier this year, the European Space Agency (ESA) invited candidates to apply for the chance to become the first physically disabled astronaut. The ESA has said it will develop specialized equipment so that “Parastronauts” can perform the same tasks as their able-bodied colleagues in zero-G.

“Including people with special needs also means benefiting from their extraordinary experience, ability to adapt to difficult environments, and point of view,” the ESA said.

■ Life on the moon

What will the job market be like on the moon?

According to Atsushi Uchida, 46, a senior researcher at Mitsubishi Research Institute, Inc., lunar bases will likely require an array of people with niche skill sets, who will gradually supersede the jack-of-all-trades Superman astronaut of years past.

First, there is the logistical challenge of transporting supplies nearly 380,000 kilometers to the moon. Initial settlers will have to make effective use of resources that are already there, using moon rocks for building bricks and extracting the water believed to be locked away at the moon’s poles. This will be a job for experienced carpenters and architects.

Farmers, too, may play a crucial role in establishing a self-sufficient food supply.

Food tends to taste bland in space — many astronauts resort to dousing their meals in hot sauce. Colonists will want professional chefs to make their vegetables grown with moon water more appetizing.

Therapists trained in psychological counseling would also be a valuable presence on these long missions away from home.

Meanwhile, the advent of private spaceflight has been blurring traditional definitions of the term “astronaut.”

In September, U.S. aerospace firm SpaceX made history by launching four passengers into orbit as the first crew comprising all private citizens. Hollywood superstar Tom Cruise has announced plans to shoot a movie aboard the ISS, and in October, a Russian actor and a film director stayed on the ISS for 12 days and shot the world’s first movie filmed in space.

But simply experiencing weightlessness is not enough to earn an astronaut’s wings. For example, to qualify as a commercial astronaut in the United States, flight members must demonstrate that their mission “makes contributions to human space flight safety.”

The continued growth of the industry will likely make current notions of the astronaut obsolete, as a more diverse group of people finds a foothold in the final frontier.

Stardom has literal implications for Arisa Kuroda, a 34-year-old who hopes to be the first Japanese entertainer in space. A former physics major known for her popular YouTube channel about the many wonders of the cosmos, Kuroda says her dream is “to soak in a bathtub built into a crater on the moon, and sip wine while gazing down on the Earth.”

The day may come when a tourist books their own lunar vacation, after watching her review of a 5-star hot spring resort that is truly “out of this world.”

More people suiting up for space might also lead to an increase in space crime.

In 2019, an American astronaut on the ISS was accused of improperly accessing the bank account of her estranged spouse in the midst of divorce proceedings.

This case was widely reported as possibly the first crime committed from outer space.

Countries including Japan, the U.S. and some European states involved in the ISS have an agreement that alleged crimes are to be handled according to the laws of the suspected offender’s country.

But as life outside the jurisdiction of Earth becomes commonplace, these communities might need another legal framework and people who can act as a kind of space lawyer to resolve certain issues as they arise.

International rules have yet to catch up regarding the ownership of resources such as water and minerals, a sticky issue complicated by the competing interests of each nation involved.

The United Nations’ Outer Space Treaty holds that outer space is not to be subject to national appropriation by claim of sovereignty or occupation, but does not clearly address the ownership of space resources.

In recent years, the United States and China have laid plans to launch lunar bases for the purpose of resource exploration, foreshadowing a potential tug-of-war over resources between countries in the future.

In Japan, a law was enacted this year that grants companies ownership of resources harvested in outer space.

But Mihoko Shintani, an attorney knowledgeable about space commerce, cautions: “We need to create rules that each country must follow to prevent the moon from falling victim to unregulated development.”