TOKYO — Asia’s growing appetite for beef is colliding with COVID-era supply glitches and food price inflation, driving up the cost of the meat and hitting consumers and restaurant owners across the region.

U.S. cattle prices are at their highest levels in two and a half years and production and shipping difficulties have layered on even more costs, international data show.

The United Nation’s Food and Agriculture Organization (FAO) food price index shows significant increases across the board, from cereals to vegetable oils, pushing the weighted average of global prices up 31.3% year-over-year in October. Among meats — and of especial interest to Asia’s growing middle class — the cost of beef was up 32.7%. In September, its bovine index reached its highest since comparable data became available in January 1990.

Futures contracts traded on the Chicago Mercantile Exchange in the U.S. — one of the world’s biggest beef exporters — show the price of live cattle at over $1.30 per pound since October, up more than 20% from the previous year, according to QUICK-FactSet data.

“With the rapid rise in coronavirus vaccination rates around the globe, the demand for meat, especially from the food service industry, is growing,” Yu Oana, a general manager of beef operations at Japan’s Sojitz Foods told Nikkei Asia.

The pandemic has done little to derail longer-term trends. While pork is still the main meat consumed in Asia, the region’s expanding middle class has swelled demand for beef. The United Nation’s FAO and OECD noted that Asia and the Pacific is the only region where per capita beef consumption is expected to rise until 2030, from a low base. China is the main driver of demand. The organizations forecast that per capita consumption in the world’s second-largest economy will climb a further 8% by 2030, after growing 35% in the last decade. What the pandemic has done is pile production complications on top of other difficulties that have held back supply, and disrupted international trade.

In the U.S., meat processing plants suffered some of American industry’s worst outbreaks of COVID-19 and have struggled to return to normal. This has been a source of political controversy domestically, since American beef prices are also soaring, but it is of worldwide importance as the U.S. is one of the three biggest exporters of beef, along with Brazil and Australia. Together, the three account for almost half global beef exports.

The U.S. shipped $5.95 billion of its beef worldwide in the January-August period, up 36% from the especially heavily disrupted period a year earlier, according to data from the U.S. Department of Agriculture and compiled by the U.S. Meat Export Federation.

But “American meat plants have not yet returned to operating at full capacity and are facing labor shortages,” Oana said. Shipping disruptions and a lack of containers in the wake of the pandemic are also lingering questions, he said.

Australian exports remain at longtime lows. Beef and veal exports fell 8.6% in October from the previous year to 74,333 tons, according to government data.

“Australia is still seeing the impact of droughts that took place during 2018-19,” said Akio Shibata, head of Japan’s Natural Resource Research Institute. The drought forced ranchers to slaughter cattle as a shortage of hay meant they couldn’t afford to feed their herds.

Brazil, the world’s top beef exporter, meanwhile, announced in September that it has halted shipments to its biggest customer, China, after confirming cases of “atypical” mad cow disease in domestic meat plants.

Sojitz’s Oana said that trade agreements between Asian countries and the U.S. have also significantly changed supply-demand dynamics. For January to August this year, the export value of American beef to mainland China increased by 891% from the previous year, to almost $1 billion. The so-called “phase one” trade agreement between Beijing and the Trump administration included a promise to scale up agricultural imports from the U.S.

Also, demand for American beef is strong in South Korea, especially after the introduction of a free trade agreement which reduced duties on muscle cuts from 40% when it was signed in 2012 to 13% this year, on the way to zero by 2026. 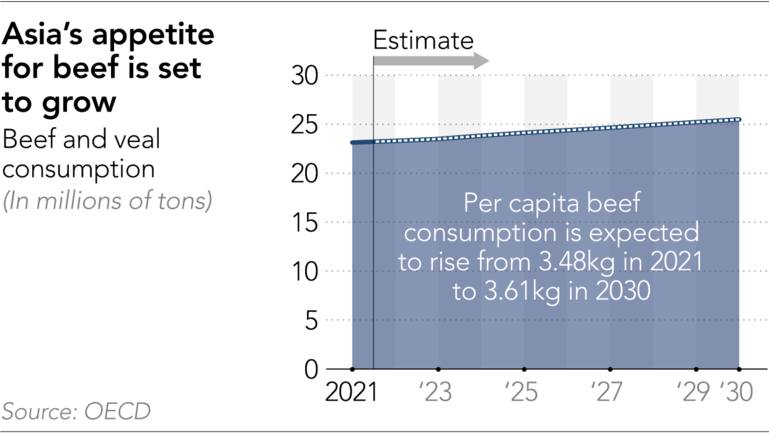 While Asian countries like South Korea are gaining purchasing power thanks to trade agreements, Japan is losing. “Amid the crunch, Japan finds itself falling behind in the international race, unable to afford the scantly-supplied and increasingly expensive import beef,” said Nobuko Kobayashi, a partner at EY Japan.

He said he had hoped to increase his purchases of American beef and hold down prices in response to consumer demand.

“As the pandemic hit household budgets, consumer demand has shifted to more affordable beef like American beef from something high quality like Wagyu,” he said, but he had been forced to increase retail prices by 20-30% from the previous year.

Akiba is not alone in wrestling with the dilemma. Although Tokyo lifted coronavirus restrictions on eateries in late October as new infection cases continue to drop, higher beef prices have added another challenge for the food service industry. The restaurant chain Yakiniku Like, famous for its grilled beef, decided to add pork to its menu from early October. Beef bowl chain Yoshinoya lifted prices for the first time in seven years, after the wholesale price for U.S. belly meat doubled from a low in the summer of 2020.

EY’s Kobayashi, told Nikkei Asia that beef price increases will lead consumers and restaurants to switch to poultry and pork, but that will push up their wholesale prices, too. “This is already happening today, impacting the profitability of the food service sector, as well as retail price,” she said.

Kobayashi sees no end to the demand trends. Chinese consumers are diversifying their protein sources from their traditional pork-heavy diet. “While a shift to poultry was triggered by the swine flu-induced price hike in 2018 and somehow subsided thereafter, the appetite for beef has longer-term traction thanks to the growing middle-income class.”