TOKYO — Colombia’s vice president has called on Japan to join the Pacific Alliance, a four-member Latin American trade bloc that aims to expand exports to Asia.

“We would like Japan to become a full member of the alliance,” Marta Lucia Ramirez, the Republic of Colombia’s vice president and foreign minister told Nikkei Asia.

The Pacific Alliance comprises at present Chile, Colombia, Mexico and Peru, all of which have Pacific coasts.

Chile, Mexico and Peru are also signatory to the Comprehensive and Progressive Agreement for Trans-Pacific Partnership (CPTPP), which Colombia has yet to join.

“The truth is that we have not yet seen a full invitation,” said Ramirez. “Right now, we are concentrating all our efforts on the Pacific Alliance, but we think CPTTP is also an excellent initiative.”

Colombia’s desire for Japan to join comes as interest in the Pacific Alliance among Asian countries grows. 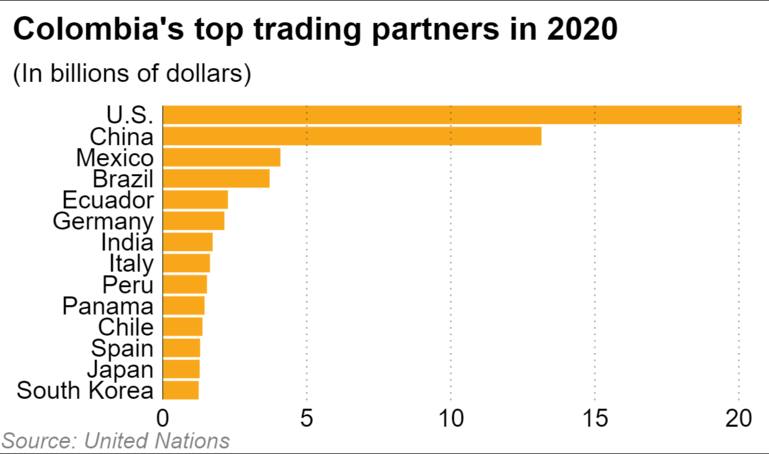 Ramirez said Colombia is looking to export fruit, vegetables and meat to Asia. It is particularly well known for its fine coffees and teas.

Colombia is also looking for investment from Asia as it modernizes its economy and digitalizes.

Japan’s SoftBank Group is already active there. Its Vision Fund has invested in Colombian startups such as the delivery service provider Rappi and digital hotel chain Ayenda. The group announced its $1 billion Rappi investment in 2019.

Ramirez arrived in Japan on Nov. 6 and will stay until Nov. 9. Her meeting schedule includes Chief Cabinet Secretary Hirokazu Matsuno among others.