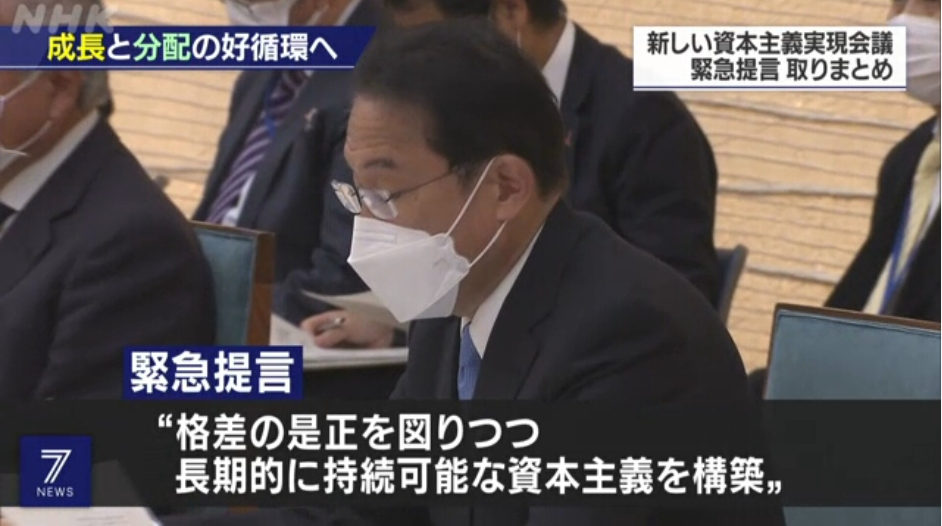 A Japanese government panel on Monday drew up a priority list of proposals aimed at implementing a new form of capitalism to spur the economy, as advocated by Prime Minister Kishida Fumio.

The list highlights tasks for the Kishida Cabinet to tackle with the aim of igniting a virtuous cycle of growth and distribution.

The government is urged to foster sustainable capitalism while trying to narrow the gap between rich and poor.

The panel argues against leaving everything to the market to decide. It instead calls for the creation of an economy fit for a new age through collaboration between the government and the private sector.

The government is also called on to provide financial and other forms of support for young, talented researchers on an ongoing basis, to promote a shift to a more science and technology-oriented nation.

The panel says that the government should embrace renewable sources of energy as much as possible to help achieve carbon neutrality by 2050.

The list also details a possible expansion of tax breaks for large companies that have injected capital into start-ups and large subsidies for regional digitalization initiatives such as robot -delivery networks in remote areas.

To promote a broad-based distribution of wealth, the panel urges greater tax breaks for firms willing to raise salaries not for new hires but those already on the payroll.

Kishida told the panel there has been a shift in various parts of the world toward a new capitalism that values sustainability and people, and that also aims to propel new investment and growth.

He said the panel has come up with priority proposals so Japan can lead this movement globally. He went on to say that he wants to launch this new capitalism by carrying out the tasks listed in the proposal as part of a new economic package.

He added that he aims by spring of next year to lay out a comprehensive framework of measures to bring this new capitalism into being, which he hopes will draw worldwide attention.