In a sign of the times, the Mie prefectural board of education patrols the internet instead of schools and classrooms looking for bullying linked to children and students in the prefecture.

Under the specialized app put in operation in June last year, when comments connected to bullying and other inappropriate posts are discovered by citizens, they are kept as images for reports.

As necessary, the prefectural board of education will work with school operators and police to protect the victims based on the information.

To respond to online bullying cases involving much younger children, the board of education is also developing a new textbook for elementary school kids to provide a “further improved training program to boost their digital literacy.”

The education ministry’s fiscal 2020 survey showed though the total number of bullying problems reported among children across Japan was down for the first time in seven years as they had fewer opportunities to see each other in the COVID-19 pandemic, online bullying incidents hit a record high.

Bullying is rife on the internet among pupils and students, rendering it increasingly difficult for teachers and other adults to quickly confirm children’s problems. 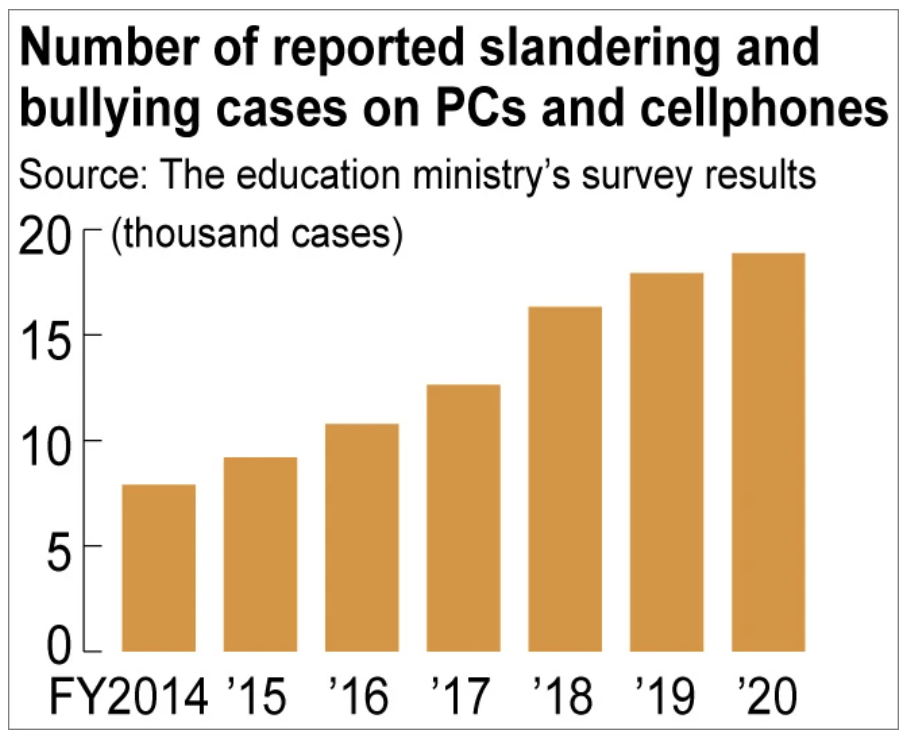 Starting this fiscal year, tablet computers are being distributed to all elementary and junior high school students nationwide, raising the chance of children communicating with one another through the internet.

A male teacher working at a public elementary school in Tokyo said many offensive words such as “annoying” are posted on his class’s chat service, when electronic beeps successively signal that images and comments have been posted.

Some students, while exchanging opinions, prided themselves on their beating down others, saying, “I win.”

While the educator said those in his class are gradually becoming able to warn each other against potentially problematic words and deeds, some other classes “are forced to restrict use of mobile devices” to stop any issues from arising.

“The school staff are prohibited from checking children’s records of the devices’ use but are supposed to take responsibility if something bad happens,” said the teacher.

The educator expressed his sense of crisis.

“There are chat rooms and other places that are impossible to monitor for adults,” he said. “They (interactions on the internet) will worsen unless outbreaks of trouble are discussed and considered every time they emerge.”

Saya Moriyama, a licensed clinical psychologist, said teachers are “struggling to respond to the growing number of online problems that are difficult to find for adults,” and that she now receives complaints from those educators more frequently.

Moriyama, who helps people to prevent or recover from internet and video gaming addiction, pointed out that bullying could arise from not only chatting services but children playing online video games.

“Personal relationships are being damaged among friends due to comments traumatizing one another, resulting in their refusal to go to school at times,” said Moriyama.

According to the education ministry’s survey, 517,163 bullying cases were reported in fiscal 2020 in elementary, junior and senior high schools as well as disabled children’s education facilities, down 15.6 percent from the previous year.

“The nationwide school closures, social distancing and other steps put much greater physical distance between children,” said a ministry official, explaining declining cases whereas the number of reported bullying incidents had increased for six consecutive years since fiscal 2014.

Despite the overall drop, 18,870 instances of verbal abuse and other kinds of harassment with personal computers and smartphones were reported, the most since that category of bullying was included in the study in fiscal 2006.

The figure doubled from fiscal 2015, when no more than 9,187 such events were confirmed. The reported online number of problems was up 5.3 percent from fiscal 2019 with a 1.3-fold rise recorded in particular among elementary school pupils.

In some fatal incidents that municipalities and other parties are examining, problems on the internet are said to have led to children’s deaths.

A sixth-grade girl at an elementary school in the capital’s Machida committed suicide in November last year. Her parents said the word “irritating” and other slanderous words had been posted through devices distributed by the school.

A second-year female junior high school student, who was found dead in Hokkaido’s Asahikawa in March, was allegedly involved in difficulties with her classmates over shared images.

The central and local governments are making efforts to detect children’s problems earlier while many challenges remain.

The education ministry introduced a subsidy program for municipalities to open centers to listen to kids’ problems through the Line messaging app or email around the clock across the country.

Portable devices to be distributed to children are recommended to be fitted with an application to contact those centers.

The Tokyo metropolitan government’s project to handle problems of young people received 2,822 complaints in the last fiscal year, 1.6 times more than that of the previous year, 243 of which involved online bullying. Many complaints are coming in this fiscal year as well and are on pace to reach the same level as a year earlier.

The program’s official website shows some actual complaints, such as “being slandered when failing to reply to friends while playing a video game.”

On the Web page, a child complained that a classmate took a photo of the student at school in the company of someone without permission, which was shared repeatedly on a messaging app by individuals and groups.

Another stated on the site that friends in the same class and club formed a social media group to speak ill of the student. A child’s school friend is reported to have processed and posted a facial image on their class group on a messaging app against the victim’s will.

The website alike offers advice for bullied children, calling on them to “make screenshots of incidents of slander to save them and then seek advice from adults close to you.”

(This article was written by Norihiko Kuwabara and Azusa Mishima.)