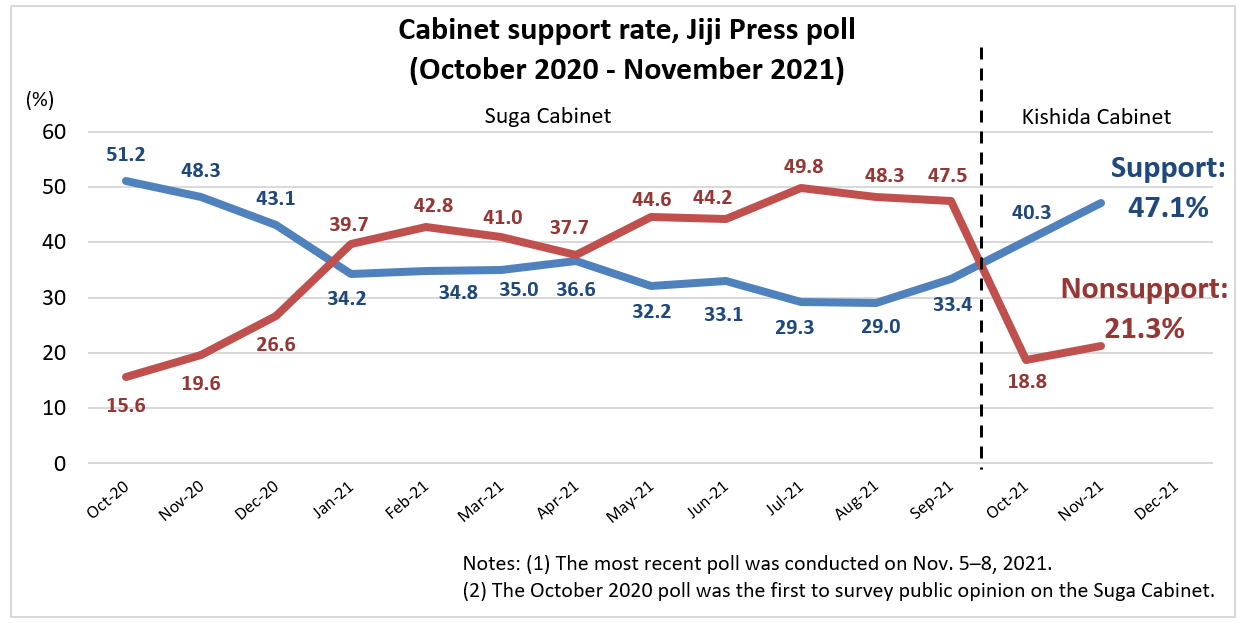 The disapproval rate stood at 21.3 pct, up 2.5 points, according to the November survey, carried out over four days through Monday. The proportion of people who answered neither or said they do not know stood at 31.6 pct, down 9.2 points.

The rise in the approval rate came apparently because respondents held somewhat higher hopes for Kishida to implement policy measures, after he retained power through his ruling Liberal Democratic Party’s victory in the Oct. 31 general election for the House of Representatives, the all-important lower chamber of the Diet, Japan’s parliament, pundits said.

A recent plunge in the number of new cases of novel coronavirus infection in the country may also have helped raise the support rate, they said.

Kishida was re-elected prime minister in votes at the Diet on Wednesday and launched his second cabinet the same day.

Of those disapproving the cabinet, 11.1 pct said they expect nothing from Kishida, 5.4 pct said they do not support the LDP and 4.6 pct said he lacks leadership skills.

Asked about policy areas the government should prioritize, 69.7 pct cited “pensions, and medical and nursing care” and 61.4 pct picked “the economy and employment.”

“The environment and energy” and “child-rearing and education” were each selected by 44.2 pct, “novel coronavirus measures” by 41.1 pct and “constitutional reforms” by 12.5 pct.

The support rate for the LDP stood at 27.2 pct, down 0.2 point, while the main opposition Constitutional Democratic Party of Japan and major opposition Nippon Ishin no Kai (Japan Innovation Party) saw their support rates rise by 1.6 points to 5.4 pct and by 3.2 points to 4.7 pct, respectively.

The support rate came to 3.5 pct for Komeito, the LDP’s coalition partner, 1.8 pct for the Japanese Communist Party, 0.8 pct for the Democratic Party for the People, 0.6 pct for Reiwa Shinsengumi, 0.4 pct for the Social Democratic Party and 0.1 pct for NHK to Saiban Shiteru To Bengoshiho 72 Jo Ihan De, a single-issue party critical of public broadcaster NHK, or Japan Broadcasting Corp.

The proportion of respondents having no particular party to support stood at 53.1 pct, down 5.7 points.

The interview-based opinion survey covered 2,000 people aged 18 and up, with 63.5 pct of them giving valid responses.