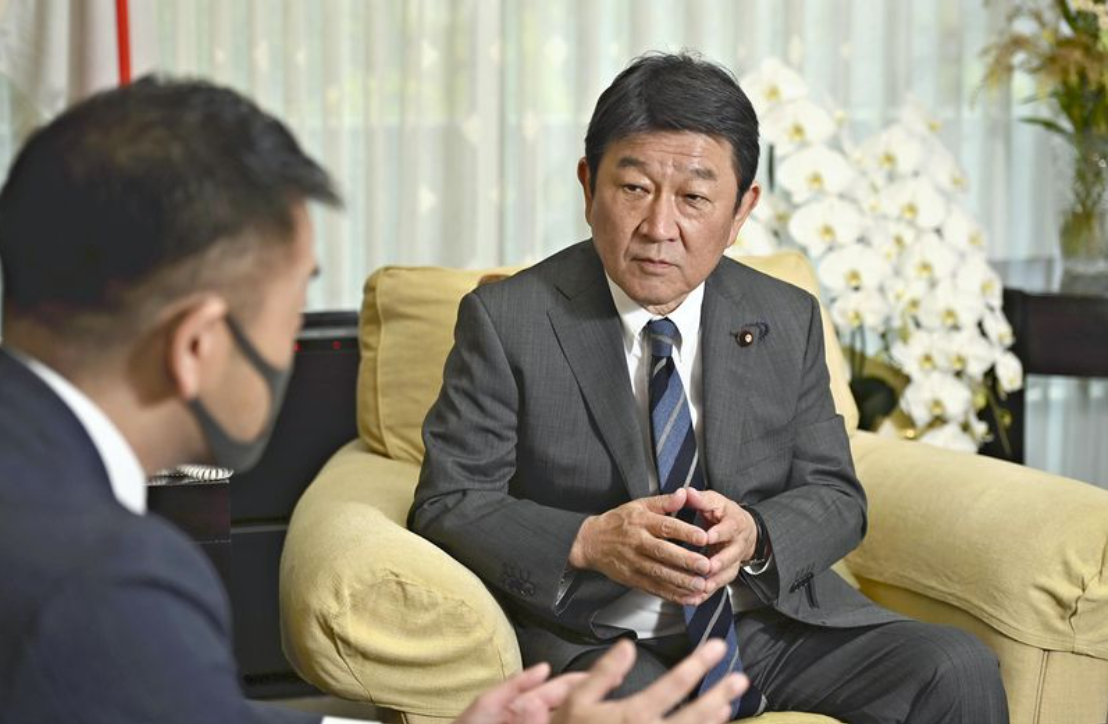 The Liberal Democratic Party’s Secretary General Toshimitsu Motegi spoke to The Yomiuri Shimbun on Friday. The following is excerpted from his remarks in the interview.

The Yomiuri Shimbun: Prime Minister Fumio Kishida has indicated that he will make progress toward constitutional revision during his three-year term as LDP president. What are your thoughts on this?

Toshimitsu Motegi: Since the party has reached a consensus on this matter, the main battlefield will shift to the Diet.

The recent House of Representatives election boosted the number of lawmakers not in our party who are positive [about constitutional revision]. There has never been a chance for the public to make a decision on the matter, so I believe people must be waiting for such an opportunity. We hope to have discussions with various political parties in the Diet to have specific options and set a time frame.

Q: How should discussions proceed?

A: In light of the crisis with the novel coronavirus pandemic, there is a growing sense of urgency about emergency situations. The commissions on the Constitution of both chambers of the Diet will decide on the procedure, but it is necessary to start discussing matters in detail. Rather than trying to discuss the Constitution in general terms, with each party, we should draw a conclusion about the priority of various issues and have the public make a decision. I’m willing to have the frequency of commission meetings increased with consideration given to the Diet schedule as a whole.

Q: What are your thoughts on the possession of ‘the ability to attack enemy bases’ that the prime minister is considering?

A: As the threat becomes more serious due to the improvement of missile capabilities, it is necessary to consider various options, including, strictly speaking, ‘the ability to counterattack enemy bases.’ As a party, we believe it is a viable option.

Q: The LDP’s junior coalition partner Komeito is cautious about this.

A: Komeito has shown an understanding for having standoff missile capability. Maybe we can share common views.

Q: How do you plan to approach the House of Councillors election next summer?

A: Analyzing the causes of defeats and the tasks to be tackled in the regions where our party candidates lost [in last month’s lower house election] will be helpful for the upper house election. In Osaka [where all LDP candidates running in single-seat constituencies lost], there are very few LDP local assembly members, therefore, the party must also get local organizations back on track. I want to visit prefectures and have thorough discussions on how to select candidates and carry out activities at local organizations. We also need to strengthen our communication through social media. There is a gap between those who are proactive online and those who are not, and I want to make sure that all of us make use of it.

Q: How do you plan to proceed with party reform that the prime minister has mentioned?

A: I will come up with a direction for the reform in about three months. I will start with implementing what can be carried out. In order to get closer to the public, we can hold online dialogue with them on different themes to exchange views and reflect their opinions that emerge. We want to show that the LDP is changing and evolving.

Q: What about the prime minister’s proposed term limits for party executives of one-year terms, up to three consecutive terms?

A: I want to make it happen. Companies have their corporate governance code. I hope that the LDP can take the lead in creating such rules as a modern political party.

Q: What are your ambitions for the post-Kishida era?

A: Right now, as secretary general, I’m committed to supporting the Kishida administration to the best of my ability.

On top of that, I’m fully aware that one day I will have to live up to the expectations of my colleagues in our group, my constituency and my supporters.