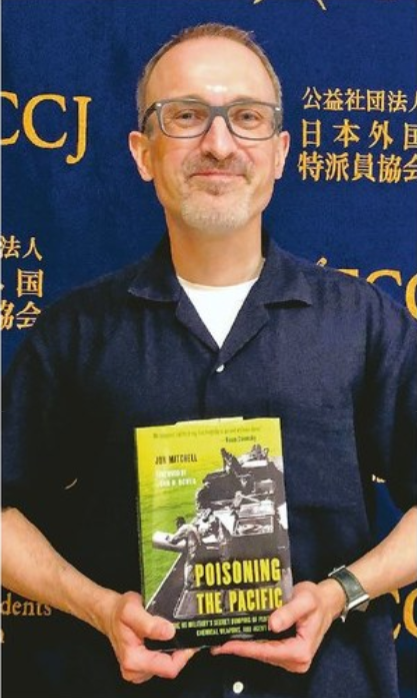 In a new book released last year, journalist Jon Mitchell (47) exposes the U.S. military’s environmental contamination of the western Pacific. Mitchell painstakingly reviewed thousands of pages of internal documents obtained through public records requests, and interviewed survivors, service members, whistleblowers, and indigenous leaders to expose a situation that has been covered up. Some of the incidents described in the book took place in Okinawa, where the U.S. military continues to release toxic substances even today. In 2021, the Society of Environmental Journalists presented him with the Rachel Carson Environment Book Award.

Mitchell was reportedly inspired to pursue journalism because of a murder that happened in his home country of Wales in 1985. When a BBC investigative report revealed that the charges were false, Mitchell recognized the importance of journalism.

After pursing American Studies at university, he became interested in Japan and came to the country in 1998. Inspired by his great-grandfather, who was subjected to a gas attack in World War I, Mitchell has focused on environmental contamination at U.S. military bases caused by chemical weapons.

Through public records requests, Mitchell has obtained over 12,000 pages of internal documents held by the Pentagon and Central Intelligence Agency (CIA). Moreover, he has interviewed over 300 [U.S.] veterans and people living near U.S. facilities in Okinawa. He reportedly took note when both the vets and the local residents were invariably concerned about the [chemicals’] impact on children’s health.

Mitchell traced the damages to human health caused by Agent Orange, a highly toxic defoliant brought into Okinawa at the time of the Vietnam War. Vets were awarded compensation thanks to his investigative reporting.

More recently, Mitchell has been focusing on the U.S. military’s contamination of local environments by PFOS and other organic fluorine compounds, a situation which is becoming more serious in Okinawa in particular. The substances are carcinogenic and affect birth weight. According to Mitchell, “Most Japanese are unaware of the problem.”

Profile: Born in Wales in 1974, Jon Mitchell lives in Yokohama today. He reports on such issues as chemical weapons and human rights in Okinawa.