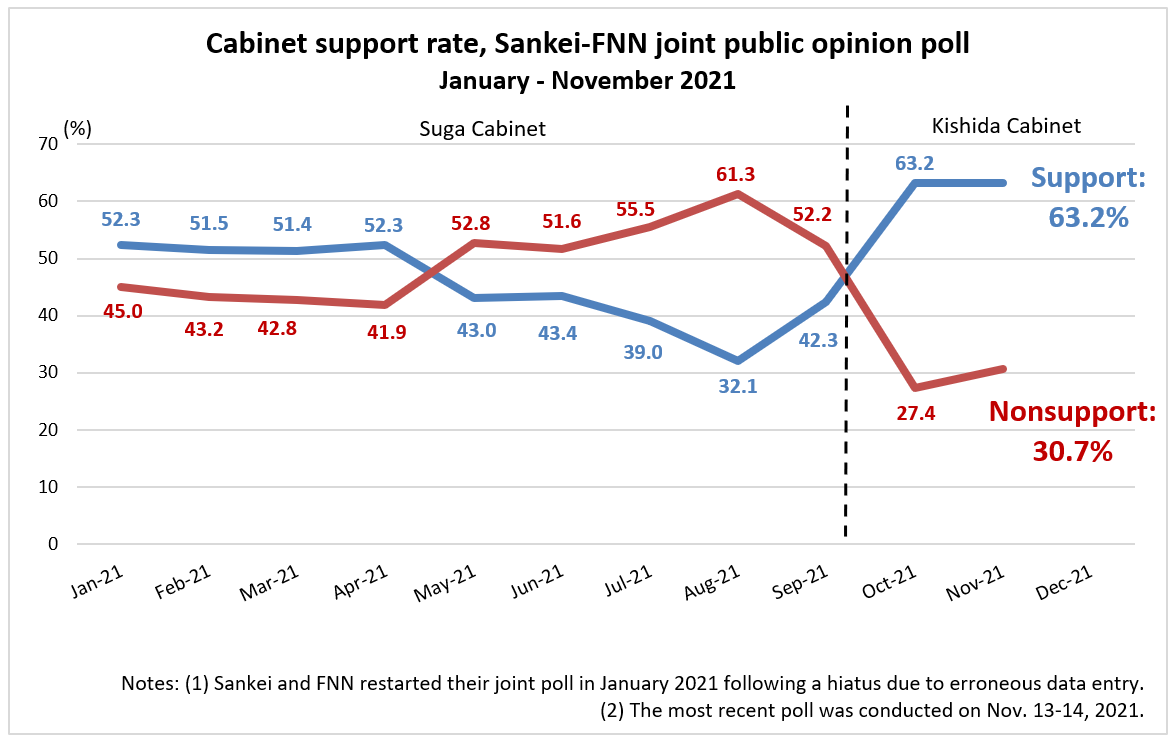 According to the joint public opinion poll conducted by the Sankei Shimbun and the Fuji News Network (FNN) on Nov. 13–14, a plurality of 63.2% of respondents said they support the second Kishida Cabinet, which was launched on Oct. 10 after the recent Lower House election. Backing for the Kishida Cabinet is thus unchanged from the previous survey (conducted on Oct. 9–10). The disapproval rate was 30.7%. The Prime Minister has indicated a desire to revise the Constitution, and 55.5% of respondents said that they are in favor of amendment, outpacing the 33.9% who said they are opposed. The party support rate for Nippon Ishin (Japan Innovation Party), which saw its holdings in the Lower House increase dramatically in the recent Lower House election, rose to 11.7%, overtaking the main opposition Constitutional Democratic Party of Japan (CDPJ; 9.0%).

Asked what policies they would like to see the Kishida administration prioritize (multiple responses permitted), “the economy and jobs” was the most frequently given response at 42.3%, overtaking “COVID countermeasures” (35.3%), which was top in the previous poll. Some 59.3% of respondents said that they are “hopeful” about the Prime Minister’s economic policies, which aim to create a “virtuous cycle of growth and distribution.” Some 36.6% said they are pessimistic about this approach.

The government and ruling parties plan to give handouts worth 100,000 yen to households with children age 18 or under and have set an annual income ceiling of 9.6 million yen as the cutoff point for eligibility. Views were divided on this policy, with 33.7% of pollees saying “the handouts should not be limited to households with children,” 27.1% saying the “income cap should be lowered,” and 16.9% saying the “handouts should be given out across the board without setting a limit on income.”

The CDPJ and the Japanese Communist Party (JCP) backed the same candidates in the recent Lower House election. Some 55.9% of respondents said the two parties should continue that approach in the future. Some 44.2% said “it would have been better if the opposition parties had gained more seats in the Lower House election,” while 40.7% said the results of the recent election were “just right.”

[Polling methodology: A total of 1,046 men and women, aged 18 and over, across the nation were surveyed. The nation was divided into 11 blocs corresponding to the Lower House proportional representation districts. The survey was conducted by placing telephone calls on a random digit dialing (RDD) basis until the calculated number of responses obtained from each bloc corresponded to that bloc’s relative population. A weighted adjustment was then performed for such variables as gender and age. Calls were placed to both landline and mobile numbers in the ratio of 4:6. The following follow-up question was posed to respondents who gave an unclear answer to the question about Cabinet support: “Which is closer to your view?” The responses to the follow-up questions were added to the responses to the initial question. The survey was conducted on Nov. 13–14, 2021.]