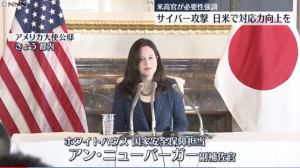 NTV and TV Asahi reported online that visiting Deputy National Security Advisor Neuberger stressed at a press conference held in Tokyo on Wednesday the importance for the United States and Japan to work closely to respond to increasingly frequent cyberattacks. She was shown saying: “We know that sense of urgency is shared with Japan as well to improve resilience and to meet the scope and scale and sophistication of increased cyber security threats, and that was at the core of our discussions.” NTV added that the Deputy National Security Advisor cited an incident in which a U.S. pipeline suffered a cyberattack this year and stressed that the issue is directly linked to economy and security. She was also shown saying: “Both U.S. and Japanese companies are at the core of global technology, and building an improved security in that technology is a priority in the United States.”  TV Asahi said the Deputy National Security Advisor also mentioned that the security of Taiwan, including defense against cyberattacks, is a priority and stressed the importance of sharing information within such frameworks as the Quad.