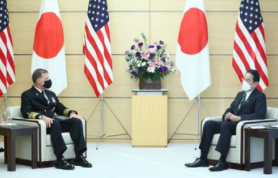 Prime Minister Kishida Fumio met with Adm. John C. Aquilino, Commander U.S. Indo-Pacific Command, at the Prime Minister’s Office on Nov. 11. During the meeting, the prime minister said, “By further promoting cooperation between Japan and the U.S., we hope to realize a free and open Indo-Pacific and cooperate for the stability of the region and the international community.” Adm. Aquilino also met with Chief of Staff, Joint Staff Yamazaki Koji, the highest-ranking uniformed official of the Defense Ministry on Nov. 10. The security environment around Taiwan, where China is increasing its military pressure, was one of the topics discussed during the series of talks.

During the meeting with the prime minister Adm. Aquilino stressed that “the Japan-U.S. alliance is very strong.” On Nov.11, Adm. Aquilino  met with Defense Minister Kishi Nobuo and Foreign Minister Hayashi Yoshimasa to share “serious concerns” over China’s unilateral attempt to change the status quo. They also exchanged views on North Korea’s nuclear and missile development.

This is Adm. Aquilino’s third visit to Japan since he took office in April. On Nov. 9, he visited Yonaguni Island in Okinawa Prefecture, about 110 km from Taiwan, and inspected the coast observation unit of the Ground Self-Defense Force (GSDF). During a hearing held by the U.S. Senate in March, the admiral testified that “China’s invasion of Taiwan is closer than most people think.” His visit to Yonaguni Island was apparently intended to send a message to strengthen deterrence against China.

Adm. Aquilino also visited the GSDF Camp Amami (Kagoshima Prefecture) where the GSDF deploys medium-range surface-to-air and surface-to-ship guided missiles. The U.S. military is advancing an operational concept by dispersing its missile units deployed along the first island chain, including Amami Oshima Island and Okinawa Prefecture, to counter China, which deploys more missiles than the U.S. The admiral’s visit apparently demonstrated his intention to strengthen the defense posture in cooperation with the SDF.

On Nov. 9, when Adm. Aquilino visited Yonaguni Island, the ASDF and the U.S. Air Force conducted a search and rescue drill in the waters north of Miyako Island and Ishigaki Island in Okinawa Prefecture. The ASDF announced the drill on Nov. 11, but it is unusual for the ASDF to announce a drill conducted near the Senkaku Islands (Ishigaki City, Okinawa Prefecture).