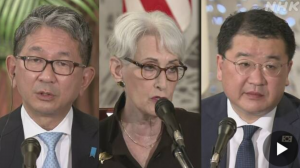 All networks reported at noon that the planned joint press conference by the vice foreign ministers of the United States, Japan, and South Korea after their meeting at the State Department on Wednesday was suddenly canceled following the South Korean police chief’s landing on the disputed Takeshima Islands, known as Dokdo in South Korea, on Tuesday. Deputy Secretary of State Sherman held a solo press conference instead. The senior officials reportedly exchanged views on China’s maritime advancement and North Korea and confirmed close trilateral cooperation. TBS said that during a meeting between the vice foreign ministers of Japan and South Korea, the Japanese side lodged a strong protest by saying that the police chief’s landing on the islands was “totally unacceptable” and urged the South Korean side to take appropriate measures, according to MOFA. NHK and TBS quoted Chief Cabinet Secretary Matsuno as telling the press this morning: “We decided that it would not be appropriate to hold a joint press conference while we were lodging a strong protest with the South Korean side over the incident on the Takeshima Islands, which was totally unacceptable in light of our position.” Fuji TV said the issue of Takeshima cast a shadow over trilateral cooperation, while TV Asahi reported that the trilateral meeting ended up exposing the soured relations between Japan and South Korea.