USTR: US to launch framework in Indo-Pacific 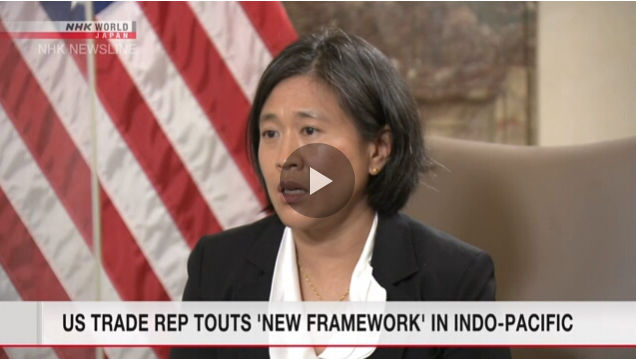 US Trade Representative Katherine Tai says the United States plans to launch an economic framework with its allies and partners in the Indo-Pacific region early next year.

The top US trade negotiator was speaking in an exclusive interview with NHK during her visit to Japan on Thursday.

Tai said the US is confronting challenges from China, adding “we have to defend the interests of our economy, and also to work with our partners and allies, with whom we share interests.”

Tai indicated that it would be difficult for the US to return to the Trans-Pacific Partnership free trade pact, saying the agreement was negotiated “five, six, seven, eight years ago.”

She added that “right now, we really need to focus on the challenges that we are facing.”

Tai also said the US is looking at launching a framework early next year with those in the Indo-Pacific region who share challenges.

It’s the first time she has said when the framework will be launched.

The US apparently expects the framework to be a tool for competing with China in the region.

US Secretary of Commerce Gina Raimondo is also on a tour of Asian nations including Japan. The trips are seen as part of efforts by the US to strengthen cooperation with its allies and friends in the Indo-Pacific, as China has been expanding its influence in the region.