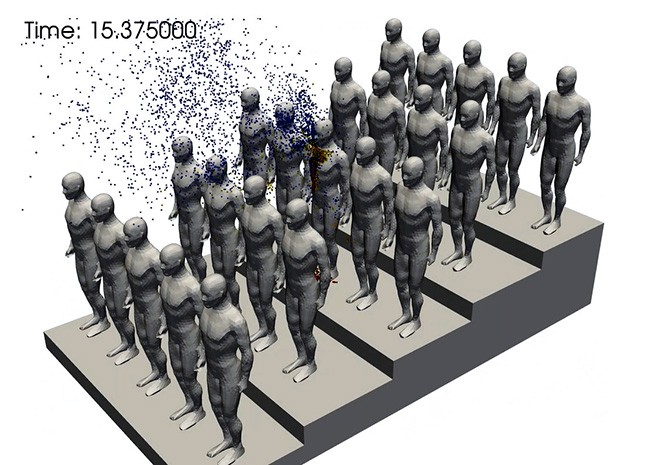 The Riken research institute’s Fugaku supercomputer, the world’s fastest, is back in the global spotlight with a special award for its simulations of how aerosol droplets disperse and educating the public on ways to prevent the spread of COVID-19.

The Gordon Bell Special Prize is given by the Association for Computing Machinery. In announcing this year’s Special Prize, the award committee said the visualization of how droplets disperse based on the Fugaku’s simulations helped to change the way people around the world acted during the pandemic.

The Fugaku supercomputer went into full-scale mode from March and this is the first time research based on the supercomputer has been recognized with an international prize.

Using the world’s fastest supercomputer, researchers were able to estimate the complicated changes that occur to the droplets, even through minor changes in air flow, and when only miniscule amounts were involved.

The research team in June 2020 began examining how saliva droplets disperse in a range of situations, such as coughing or choral singing.

Over the course of its research, the team announced about 1,000 different simulations of aerosol dispersal in 50 separate situations, including in classrooms or during commutes. The team has also looked at differences arising from the type of face mask worn.

The awards committee based its decision on the fact that governments and companies have used the results from the Riken research to encourage the use of face masks and to maintain social distancing as ways of decreasing the risk of COVID-19.

“We are very happy that Fugaku has received such a positive assessment for the impact it had on dealing with a real-time crisis,” said Satoshi Matsuoka, director of the Riken Center for Computational Science.