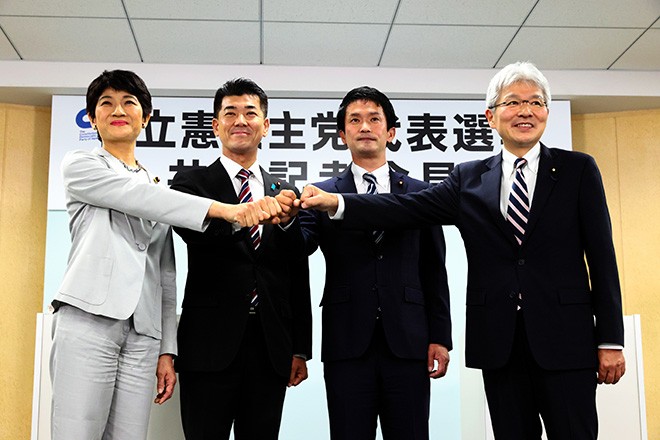 From right: Seiji Osaka, Junya Ogawa, Kenta Izumi and Chinami Nishimura pose on Nov. 19, the day their campaigns started for the leadership election of the opposition Constitutional Democratic Party of Japan. (Tsubasa Setoguchi)

Official campaigning kicked off Nov. 19 to elect a new leader of the Constitutional Democratic Party of Japan, the nation’s main opposition party.

As long as the CDP remains weak, there is no way to keep the government in check and ensure the opinions of a wide range of people are reflected in policies.

The focus of the leadership election must be on grand visions and specific measures to revive the party.

The four candidates need to offer clear-cut views about the CDP’s poor showing in the Oct. 31 Lower House election and solid ideas about how it can become a political force recognized by the voting public as a viable alternative to the ruling coalition.

The election was called to choose a successor to Yukio Edano, who announced his resignation following the poll last month.

At a joint news conference, the candidates discussed their blueprints for rebuilding the party as well as the nation’s politics.

Seiji Osaka, a former CDP policy chief, said he will seek to remake CDP into a party that serves the interests of the public by solving local problems.

Junya Ogawa, a former parliamentary vice minister for internal affairs, said he will pursue “dialogue-oriented politics” by listening to and working with the public in tackling policy challenges.

Kenta Izumi, the party’s current policy chief, said he will rebuild the CDP into one focused on developing good policies.

Chinami Nishimura, a former senior vice minister of health, labor and welfare, said she will devote herself to “rebooting bottom-up politics.”

The CDP has been keen to announce lofty ideas and policy visions but failed to make down-to-earth efforts to translate them into realistic agendas.

It has been plagued by its image as a party that does nothing but criticize the government, although its harsh stance against the Abe and Suga administrations was meaningful. It has failed to be recognized by the public as a party that can be trusted to govern.

In addition, the CDP’s political machine remains bogged down due to its weak local organizations, which has left it unable to align itself with grassroots segments of society despite its pledge to place importance on heeding their voices.

The CDP appears to be well aware of these image problems. The party plans to hold street rallies featuring the candidates’ campaign speeches and debates at three locations in the leadup to the Nov. 30 extraordinary party congress to elect a new leader.

To develop effective plans to rebuild itself, the party needs to tap the collective wisdom of not just card-carrying members and registered supporters who vote in the leadership election but also a broad range of voters through debate open to the public.

None of the four lawmakers served in Cabinet positions when the former Democratic Party was in power nor do they have broad name recognition.

Their political skills will be tested by whether they can wean the CDP from its dependence on the personal clout of Edano, who founded the party, and expand its support base through a generational shift.

Another key topic for the leadership election is the party’s cooperation with other opposition groups.

During the Nov. 19 news conference, the four candidates agreed on the need to field unified opposition candidates in as many of the 32 Upper House single-seat districts as possible. The results of these districts will go a long way toward determining the overall outcome of the election.

The new CDP leader will face the tricky question of whether to maintain the party’s electoral cooperation with the Japanese Communist Party at the risk of alienating the Democratic Party for the People and Rengo (Japanese Trade Union Confederation), a key CDP constituency, which have an aversion to working with the Communist Party.

While the CDP presidential election will inevitably cast the spotlight on the differences in views and opinions among the candidates, they should also try to find common ground. They can, for instance, agree on some policy proposals to support women.

Izumi and Nishimura have promised to seek gender parity in the party’s leadership team and the party’s list of candidates for the Upper House election, respectively. The CDP can adopt these proposals for its policy platform.

The leadership election should be used as an opportunity for the CDP to find policy areas where it can differentiate its agenda from the LDP’s and develop specific proposals for this purpose.