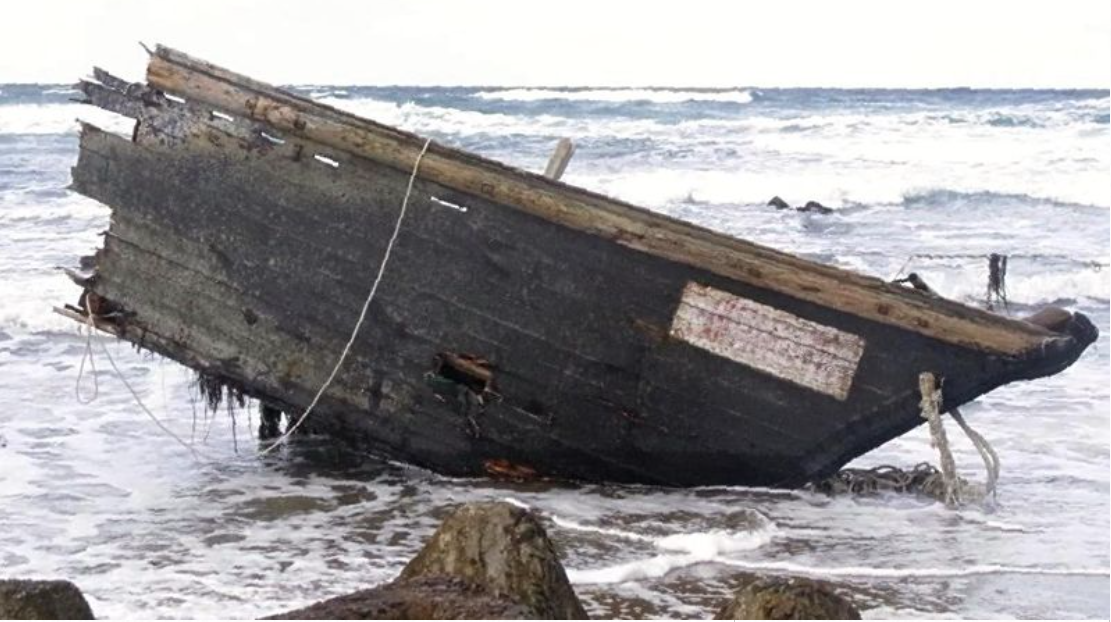 Courtesy of Sado Coast Guard Station / A wooden boat in which five bodies were found is seen in Sado, Niigata Prefecture, in December 2019.

Far fewer wooden boats believed to be from North Korea have drifted to the Sea of Japan and washed ashore this year amid the continuing pandemic.

Only 11 such incidents had been reported nationwide this year as of Friday, compared to 77 in the year 2020.

This is the slowest pace since 2013, when the Japan Coast Guard began keeping statistics.

North Korea is believed to have banned the operation of fishing vessels as a measure against novel coronavirus infections. This and fuel shortages are said to be behind the decline in the number of boats coming from North Korea.

“Thankfully, there’ve been almost no boats this year,” Tomio Kimura, 74, said with a relieved expression as he looked at the sea. Kimura heads a local crime prevention association that watches for drifting objects on Sado Island in Niigata Prefecture.

Ten cases of boats washing ashore on the island were reported in 2019. In one incident at the end of that year, five bodies were found on a wooden boat bearing what appeared to be Hangul characters. “Police vehicles lined the road along the coast,” Kimura recalled.

This year, however, there has been only one confirmed case on the island, in February.

The same trend has been seen nationwide, with only 11 cases reported. They occurred in Yamagata, Niigata, Ishikawa, Fukui and Shimane prefectures, and all were confirmed by the end of June.

More boats usually wash ashore in November and December when the sea becomes rough, but there have been no cases reported in November. The 9th Regional Coast Guard Headquarters in Niigata City described the situation as “extremely unusual.”

Most wooden boats that are washed ashore are believed to have been illegally fishing in and around the Yamatotai area, a rich fishing ground off the Noto Peninsula in Japan’s exclusive economic zone. In many cases, they are thought to have capsized in stormy seas.

In 2018, when several thousand vessels were operating illegally in the area, there were 225 cases of boats washing ashore on the Sea of Japan coastline — a record high — according to the headquarters. Local governments along the coast had to clear away pieces of the wooden boats, among other tasks.

In 2019, 158 cases of boats washing ashore were confirmed, but the number dropped to 77 last year amid the pandemic.

“The fact that North Korea has banned fishing as a measure against coronavirus infections, and the shortage of fuel for fishing boats have had an impact,” said Yoshihiko Yamada, a professor of marine policy at Tokai University.

The JCG has confirmed that a North Korean government ship equipped with a weapon believed to be a portable anti-air missile sailed within the EEZ. “The situation in the Sea of Japan continues to be extremely unstable. Japan must continue to monitor it closely,” said Yamada.