WASHINGTON — U.S. Sen. William Hagerty, who served as the ambassador to Japan in the Trump administration, is urging Tokyo to launch a diplomatic boycott of the 2022 Winter Olympics in Beijing.

Hagerty cited human rights violations in Xinjiang, as well as Hong Kong, and accused the Chinese government of hiding information in the early days of COVID-19.

Such conduct, “I think, is not deserving of, certainly not a diplomatic presence” at the Games, Hagerty told Nikkei in an interview Thursday.

U.S. President Joe Biden said later that day that his administration was “considering” a diplomatic boycott, meaning that athletes would go but not government officials.

On the possibility of a Japanese diplomatic boycott, Hagerty said: “I respect Japan’s sovereignty but I would applaud a decision in that direction, if Japan so chose.”

A Washington Post columnist reported earlier this week that the Biden administration will let allies decide on their own. But many in the U.S. see international cooperation as the best response to the rights abuses that China stands accused of.

In his first virtual summit with Chinese President Xi Jinping on Monday, Biden highlighted “the need for common-sense guardrails to ensure that competition does not veer into conflict,” according to the White House’s readout.

Hagerty said the Biden administration is angling for straightforward competition with China.

“That’s a very naive approach,” he said. The real problem, in his view, is that China does not play by the world’s rules for competition.

“What I hoped President Biden would do was take a very strong stance on the behavior of China, that is not normal behavior,” Hagerty said.

As a member of the Republican Party, Hagerty served as former President Donald Trump’s ambassador to Japan for roughly two years until mid-2019. He was elected to the Senate in his native Tennessee last year. 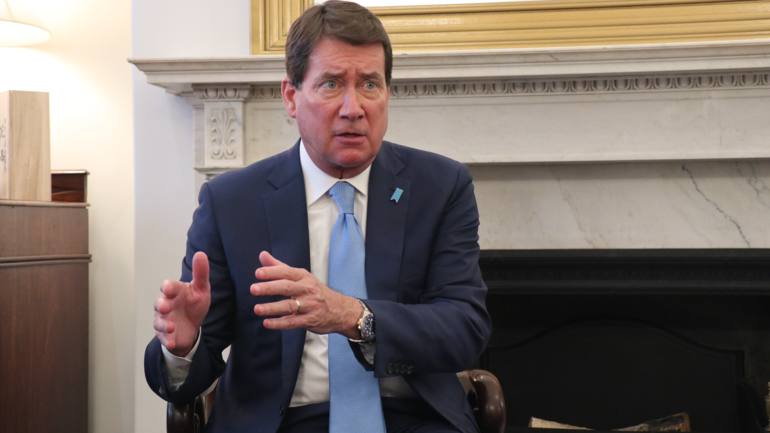 U.S. Sen. William Hagerty, a former ambassador to Japan, says he would applaud a diplomatic boycott by Tokyo at the Beijing Winter Olympics. (Photo by Ryo Nakamura)

Hagerty now sits on the Senate Foreign Relations Committee and has worked extensively on the Indo-Pacific region.

Hagerty sees Biden’s decision to withdraw from Afghanistan, which paved the way for the Taliban to retake power, is having a domino effect extending all the way to Beijing.

“I think that China’s aggressive posture has increased since the fall of Afghanistan,” Hagerty said, blaming the “emboldening of China” on the Biden administration’s “failure of execution in Afghanistan.”

“We need to send a strong message right now, that we are not in retreat mode, that we are intending to support our allies,” he said.

Hagerty and five other Republican senators introduced this month the Taiwan Deterrence Act, which would authorize $2 billion a year for a decade in “foreign military financing” to the island in order to counter the Chinese threat.

On Japan, Hagerty touched on Prime Minister Fumio Kishida’s plan to revise the national security strategy. He expressed hope that Tokyo will play a bigger role in the Indo-Pacific on both the military and diplomatic fronts.

“I would like to see greater interoperability between the United States and Japan, from a military standpoint,” said Hagerty, who expressed a desire for a counterweight to China.

Earlier this week, South Korea’s top police official visited a group of disputed South Korean-controlled islets called Dokdo by South Korea and Takeshima by Japan. Tokyo strongly condemned this, and the row escalated to the point where Japanese and South Korean diplomats refused to share the stage Wednesday at a news conference in Washington.

“In the long run, our interests, in the United States, are better served if South Korea and Japan are more cooperative and more engaged with us, and given the rise in threats in the region, from North Korea, from China,” Hagerty said.

Japan and South Korea should deepen economic cooperation to halt the deterioration in their relations, he said.

He again decried Japan’s treatment of Greg Kelly, the former Nissan Motor executive on trial for allegedly conspiring to understate the compensation of former Nissan chief Carlos Ghosn. A verdict is not expected until next year.

“It’s something that should never have occurred,” Hagerty said. Kelly is also from Tennessee.

When the Foreign Relations Committee held a confirmation hearing in October for Rahm Emanuel as the next U.S. ambassador to Japan, Hagerty said the former Chicago mayor had assured him that he would make addressing the Japanese justice system a top priority.

“Japan has an outdated judicial system that places that nation at a constant competitive disadvantage,” Hagerty said in the hearing.