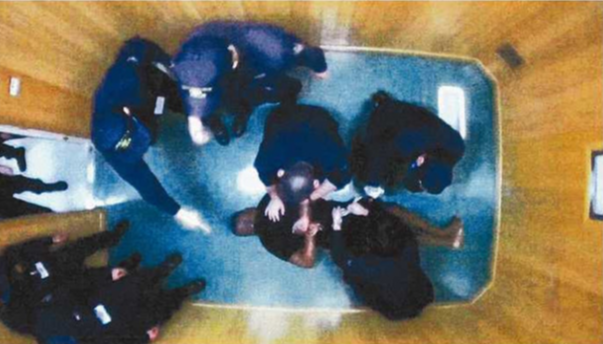 A still image released by the Tokyo Regional Immigration Services Bureau. Several staff members are trying to cuff Gordon’s hands behind his back in an isolation ward. (Photo courtesy of an attorney representing Mark Gordon)

A Haitian American man is saying he has sustained a severe injury to a hipbone and has difficulty walking after being kicked in the hip by staff of the Tokyo Regional Immigration Services Bureau in Tokyo’s Minato Ward, where he was detained, in June last year, sources told the Tokyo Shimbun on Nov. 19. The man will file a suit for 30 million yen in damages with the Tokyo District Court against the government later this month.

The man is Mark Gordon [spelling not confirmed], 52. He was temporarily released in May this year. Recently, many detainees have been found to be injured as a result of excessive actions to subdue them at immigration facilities in Japan. Gordon says the staff used abusive language against him and said, “Pay money” on a daily basis. The Tokyo immigration bureau says, “We can’t comment on individual cases.”

According to the complaint, Gordon told the staff that he did not need the soap provided by the bureau as a measure against COVID-19 on the evening of June 2, 2020. He was then taken to an isolation ward and beaten by about eight personnel. During the beating one of them knelt on his neck. He was handcuffed behind his back and fainted after being given a shot of sedative. The staff once left the ward but returned to administer another beating.

Gordon insists that he received discriminatory treatment during detention and was told, “Pay money, otherwise we will beat you.” He also insists he has been suffering from post-traumatic stress disorder (PTSD) resulting from these actions.

According to Sasamoto Jun, the attorney representing Gordon, the immigration bureau released still images taken from a surveillance camera but there was no image showing the scene of the assaults. Sasamoto says, “The bureau cites security reasons but I believe it arbitrarily removed [still images showing Gordon being beaten]. Gordon is demanding the bureau to submit all video images containing audio.

During an interview, Gordon said: “I still get panic attacks whenever I see a blue uniform (the color of the uniform worn by immigration center staff) on the street. The immigration authorities are instilling fear in us.”