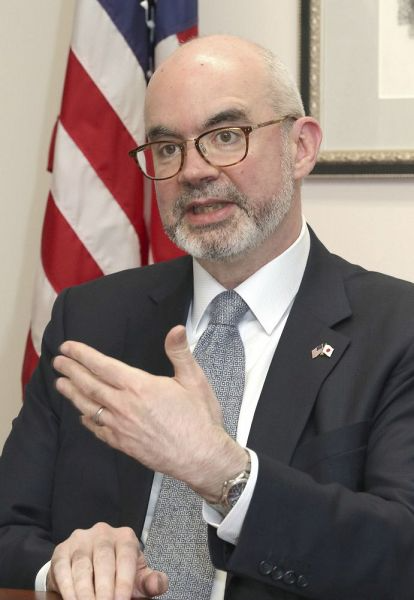 “Hokkaido is in a very good position for environmental cooperation between our two countries,” said U.S. Chargé d’Affaires ad interim Raymond Greene in an interview with Hokkaido Shimbun held on Nov. 19 during his visit to the prefecture. In this way, Chargé Greene expressed his hopes for the role Hokkaido will play in environmental efforts to realize a carbon-neutral society, a priority policy for the Biden administration.

That same day, Chargé Greene toured private-sector facilities in Tomakomai that have been commissioned by the government to conduct demonstration tests for the capture and storage of carbon dioxide emitted by thermal power plants and factories. In his interview with Hokkaido Shimbun, Chargé Greene emphasized the importance of the Japan-U.S. partnership, saying, “Hokkaido is becoming a leader in Japan’s efforts in this area, and Japan and the U.S. can cooperate in technological research and policy.”

Japan has been urging the United States to return quickly to the Trans-Pacific Partnership (TPP) trade agreement, from which President Donald Trump withdrew his nation. Chargé Greene, however, was negative about an early U.S. return to the trade pact. Instead, he mentioned some new challenges, including strengthening supply chains to resolve the global semiconductor shortage, and said that the U.S. will seek new economic partnerships within the Indo-Pacific Economic Framework announced by President Joe Biden in October.