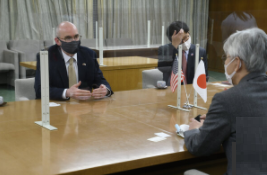 On Nov. 18, U.S. Chargé d’Affaires ad interim Raymond Greene visited Hokkaido for the first time since taking office and met with Vice Governor Kodama Toshihiro at the prefectural government office. Greene spoke of “Zero Carbon Hokkaido,” the prefecture’s centerpiece policy to reduce greenhouse gas emissions to net zero by 2050. Describing it as an “initiative of great interest,” he emphasized his desire to further promote cooperation between Hokkaido and the United States to address climate change. On Nov. 19, he toured the Tomakomai CCS Demonstration Project (Tomakomai City), a government-funded decarbonization project, and visited the Upopoy National Ainu Museum (Shiraoi Town), a center for the revival and development of Ainu culture.

Greene assumed duties as U.S. Chargé d’Affaires ad interim on July 17. Prior to this assignment, he was the Deputy Director of the American Institute in Taiwan (AIT). Chargé Greene is a member of the State Department’s Senior Foreign Service and has spent his 25-year career advancing U.S. diplomatic, economic, and security engagement with the Indo-Pacific region.

During his visit to the Hokkaido government, Chargé Greene said, “The United States and Japan are working very closely together on climate change measures.” Describing Zero Carbon Hokkaido as “an initiative of great interest,” he continued, “Going forward, we also hope to strengthen our corporate-level partnerships within the framework of bilateral cooperation.” Vice Governor Kodama replied, “We hope to make progress on environmental issues through the exchange of information between Japan and the United States and through technological exchange in our respective fortes.”

After the meeting, Chargé Greene said he hoped through his trip “to gain a more in-depth understanding of Hokkaido’s zero-carbon policy,” adding that climate change is a top priority of the Biden administration. “The U.S. is very interested in the Tomakomai CCS Demonstration Project. I understand it is the largest facility in the world, and I am sure key U.S. research institutes are also interested,” he commented. “Hokkaido is the leading local government in Japan’s decarbonization and renewable energy efforts. During my visit, I aim to gain a greater understanding [of all you are doing here]. I have high hopes for Hokkaido.”