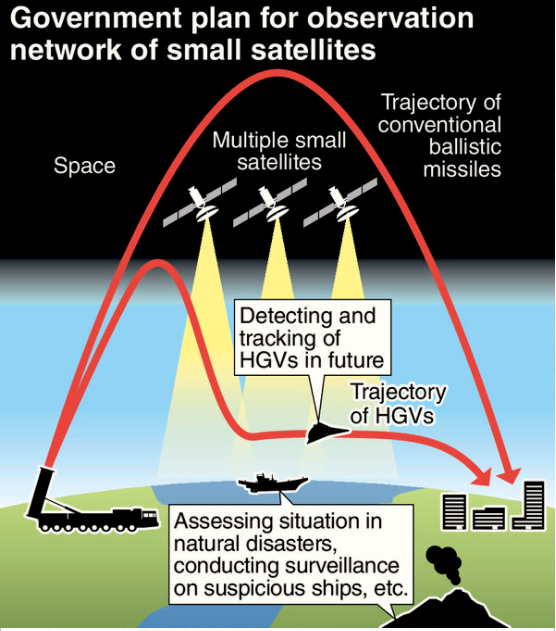 The government, aiming to construct an observation network of small satellites, plans to launch three satellites and start demonstration tests in the mid-2020s, The Yomiuri Shimbun has learned.

The system is expected to be put to such uses as assessing the situation after natural disasters and conducting marine surveillance. Looking further down the road, the government also envisions the network detecting and tracking hypersonic glide vehicles (HGVs) being developed by China and Russia, according to several government sources.

Prime Minister Fumio Kishida has stated his intention to make bold investments in research and development in advanced science and technology, including the space field.

In the economic stimulus package finalized Friday, the government established a ¥500 billion fund to strengthen economic security. About ¥60 billion for the launch of the three satellites is expected to be allocated from the fund.

An observation network made up of a group of small satellites is referred to as a “satellite constellation.”

Each satellite weighs between about 100 and 500 kilograms, and will be launched into a low-altitude orbit of about 400 kilometers. Equipped with sensors, cameras and other sophisticated equipment, they will collect data over land and sea.

Linking up multiple satellites improves data collection capabilities from current levels. By putting over 30 in operation, any place in the world can be photographed or monitored within several hours. The cost per satellite is lower than that of conventional information-gathering satellites, and the private sector is stepping up its development efforts.

The demonstration tests will serve to confirm whether communication and information processing between satellites function properly. The project calls for a possible increase in the number of satellites, depending on the test results.

The government sees the observation network as being instrumental in grasping plant distribution and the situation during natural disasters such as volcanic eruptions and earthquakes. It can also surveil suspicious ships at sea.

From the standpoint of national security, the network is expected to be used for surveillance on HGVs, which are launched from a ballistic missile and fly at low-altitude, irregular trajectories at more than five times the speed of sound.

Unlike conventional ballistic missiles, which have parabolic flight paths, HGVs stay low in the atmosphere, making them difficult to detect by ground-based radar and even more difficult to intercept. It is believed that a satellite network would be able to track the movement of HGVs from space.

China is believed to have already deployed the DF-17 medium-range ballistic missile capable of carrying HGVs, and conducted a test in August.