TOKYO — Asian airlines are increasing the number of their international flights to meet gradually recovering demand now that Japan has reopened its border to business travelers, students and migrant workers who come over as intern trainees.

After new infection numbers plummeted, the Japanese government in early November lifted its entry ban for these travelers. Although the country remains closed to tourists, airlines are gradually increasing the number of flights connecting cities elsewhere in Asia to Japan, where a severe labor crunch is developing as the population ages.

ANA Holdings, the parent company of All Nippon Airways increased the number of flights connecting airports that serve Tokyo and Ho Chi Minh City. Flights between the cities increased in November to five per week, up from three. Before the COVID-19 outbreak, ANA was covering the route with seven flights per week. Vietnam Airlines, which operates code-share flights with ANA, is expanding its own flights to Japan.

Japan Airlines also increased the number of flights between Narita Airport, which serves Tokyo, and Ho Chi Minh City’s airport to five per week, up from four.

“With the relaxation of [entry] restrictions, the number of reservations for those who wish to travel from Hanoi to Japan is increasing,” a JAL representative said. “At the moment, we have enough seats available, but we will pay close attention to reservation [trends] and consider increasing capacity as necessary.” 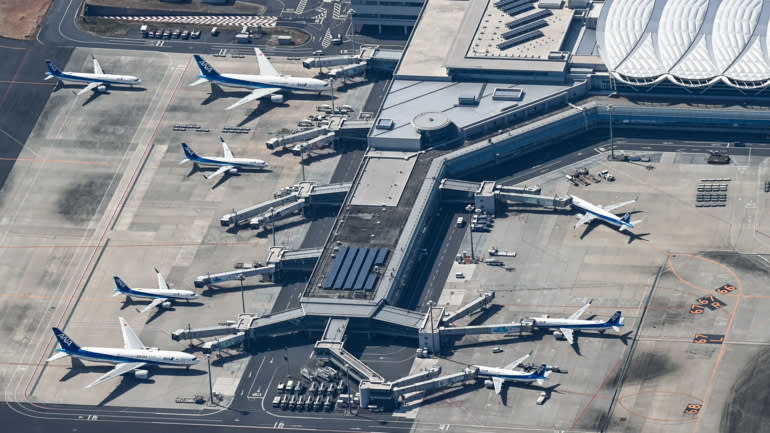 Tokyo’s Haneda airport in March 2021. Japan’s airlines face a big hurdle as they begin adding overseas flights — a reluctance among Japanese to travel abroad due to a quarantine mandate upon their return. (Photo by Arisa Moriyama)

Before the pandemic caused nations to close their borders, Japan was a popular destination for some migrant workers from Southeast Asian countries, who could enter the country via a technical intern-trainee program.

The Philippines’ Cebu Air next month is to resume flights to Japan’s Fukuoka. In October, the budget carrier began flying twice weekly to Nagoya and once weekly to Osaka. In addition, the Philippine airline this month announced it is hiring cabin crew as it prepares for a post-pandemic recovery in travel.

As for Japanese travelers, airlines are expecting them to gradually start taking more overseas trips.

Low-cost carrier Zipair Tokyo, which debuted a few months after the pandemic began, in December will launch flights between Narita and Los Angeles. The JAL budget brand plans to offer three flights per week along the route. It expects seats to fill up with price-conscious business travelers and Japanese students studying in California.

The flights will make Zipair Tokyo the first budget airline to offer flights between Asia and North America.

Although the number of flights is increasing in the region, Asia’s overall travel recovery is expected to be slow.

According to the International Air Transport Association’s latest report, published in October, cross-border flights in Asia in 2021 are estimated to be 3% of the level in 2019, much lower than the 38% for cross-border flights in Europe. The organization noted that Asian airlines’ suffering is also the result of some of the world’s most draconian travel restrictions.

The IATA expects the return of cross-border European flights and trans-Atlantic flights to outpace those of Asia, which it expects to be the worst-performing region. It sees Asia traffic in 2022 being nearly 90% below the level in 2019. “While there has been some alleviation in restrictions,” the IATA report says, “significant improvements in international markets are not expected until later in 2022.”

In Japan, travelers who want to go overseas face a big barrier — a long quarantine period upon their return.

Now that many in the country are vaccinated, a representative of ANA said, “business is starting to recover little by little, but the quarantine after reentering Japan is still a challenge we are facing. At this point, demand has yet to significantly recover.”