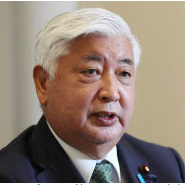 In a one-on-one interview with Nikkei, Special Advisor to the Prime Minister Nakatani Gen indicated the need to discuss the drafting of legislation to impose sanctions on foreign government officials involved in human rights violations. “Whether we need to introduce such legislation needs to be fully studied and discussed before implementation,” he said.

Nakatani was appointed special advisor to the prime minister in the second Kishida cabinet, which was launched on Nov. 10, to oversee international human rights issues. In April, he launched a nonpartisan parliamentary league to enact sanction legislation for human right violations and served as co-chair of the group until his recent assignment.

The U.S. and several European nations have a Magnitsky or similar act to impose sanctions on foreign government officials who violate human rights. Japan can freeze the assets of foreign government officials or restrict their entry into the country through the foreign exchange act and immigration control act, but it possesses no mechanism for imposing sanctions simply for the reason of human rights violations.

On China’s Xinjiang Uyghur Autonomous Region, Nakatani said: “We have various types of information suggesting grave human rights violations there and are seriously concerned.” On Hong Kong, he emphasized that the situation in China is “undermining confidence in the ‘one country two systems principle. This is a matter of serious concern.”

Asked whether Japan will join the call for a “diplomatic boycott” of the Beijing Winter Olympics, which will be held in February, he noted that “(Prime Minister Kishida Fumio) will make a comprehensive decision.” U.S. President Joe Biden indicated that Washington would consider that option because of human rights issues in China.

Nakatani also mentioned “human rights due diligence” measures, which businesses take after sizing up the risk of human rights violations, such as forced labor, within their organizations and at their suppliers.

“We will build an environment that will help businesses to promote respect for human rights,” he said. To be specific, he noted that the government aims to create guidelines for companies.

In 2011, the United Nations made clear that businesses are held responsible for respecting human rights. Germany and the U.K. have since established legislation to promote human rights due diligence at home. The former requires companies to analyze risks and take corrective measures.

Nakatani explained that Japanese firms that do business with other countries are also required to fulfill these responsibilities. On the possibility of Japan enacting similar legislation, he said that option “would not be ruled out.” He proposed launching a cross-agency liaison council that comprises division directors of concerned ministries and agencies.

Some 150 nations, including China, have ratified the legislation, but Japan is not a signatory.