TOKYO — Japan will soon mark the 80th anniversary of its attack on the U.S. Navy at Pearl Harbor in the Pacific on Dec. 7, 1941, local time.

The country had not intended to confront America directly. But with tensions heating up between the two nations over China due to affairs such as the Manchurian Incident in 1931, Japan’s policy options were eliminated.

What can we learn from the events of eight decades ago as hostilities between the U.S. and China continue to grow, perhaps to the point of war in the Taiwan Strait?

History sometimes repeats itself, but never in a straightforward manner. Obviously, the world of today is different than that of the 1930s. Unlike the prewar era when nations were divided into clearly differentiated economic blocs, now Japan, the U.S., Europe and China are closely linked economically. 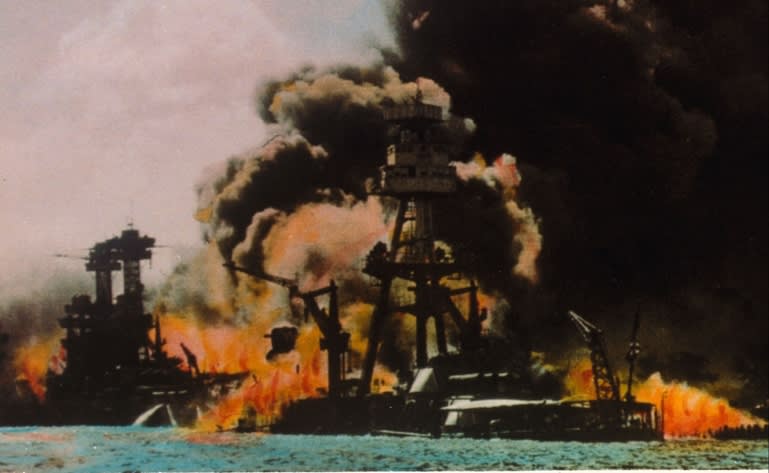 Smoke and flames pour out of a battleship in Pearl Harbor after a surprise attack by the Japanese on Dec. 7, 1941.   © Getty Images

Firstly, confrontations between big powers have gone beyond economic and geopolitical disputes into ideological meddling with each other’s national character, narrowing room for compromise as in the past.

In the days preceding World War II, Japan joined hands with fascist nations such as Nazi Germany and Italy-led by Benito Mussolini. The three faced off against the U.S. and Britain, who purportedly advocated democracy. The 21st century impasse between the U.S. and China has comparable overlapping elements, though on a very different level.

These were evident during the Nov. 16 online discussion between U.S. President Joe Biden and Chinese President Xi Jinping. According to a U.S. senior official, the exchange held more substance than two earlier telephone conferences. Both Biden and Xi not only followed prepared notes but engaged in a back-and-forth on the talking points.

At the end of the day, however, vast differences remain — from how the new world order should be shaped to specifics about Taiwan and human rights. This has been partially due to Washington’s view that the Chinese Communist Party is solidifying Beijing’s hard-line attitude. China, for its part, maintains that the U.S. wants to weaken and ultimately topple its regime.

“From the 1930s to 1941, the world was torn between the axis of Japan, Italy and Germany and the bloc led by the U.S. and Britain,” said Toshikazu Inoue, professor at Tokyo-based Gakushuin University. “The conformation was an ideological conflict between fascism and democracy. The situation today is somewhat similar to the 1930s, as China is boasting about the success of its authoritarian model and challenging democratic countries,” Inoue said.

Secondly, China’s policymaking has become as rigid as that of prewar Japan, which at the time was preoccupied with power struggles between its army and navy, leaving the country’s strategic vision blurred. Consequently, Japan forced itself into a two-front war — one in the south against the U.S. and Britain and another in the north against the Soviet Union. The front page of a New York newspaper on Dec. 8, 1941 blares a headline of the Pearl Harbor attack.   © Getty Images

Though not as egregious as Japan’s, China appears to be following a similar path. If China wants to focus efforts on strategic competition with the U.S., it should upgrade ties to Asia and Europe, thereby isolating America.

But China is moving precisely in the opposite direction. Through get-tough words and deeds, China — at this precarious time with the U.S. — is also confronting Australia, Europe, India and some Southeast Asian countries.

Given Xi’s concentration of power, it may be difficult for cooler heads in Beijing to moderate China’s excesses or to share an inconvenient truth. According to diplomatic sources, different sectors of the government and military are competing with each other to be recognized by the hardline president by advancing ambitious policies based on their own interpretation of Xi’s plans, but without his direct knowledge.

What takeaways are there from the current Sino-U.S. relationship?

First, avenues for diplomacy and security should remain open between the two, even amid confrontations in ideology and human rights.

In this respect, the Biden administration’s policy toward China makes sense, as it engages with China via three strategic channels: confrontation, competition and cooperation. The administration maintains that it should cooperate with China in such issues as climate change but challenge it over human rights and Taiwan.

But China has continued to stonewall the U.S., refusing cooperation in any field until Washington revises its hard-line policy, a U.S. government source said. Considering this, it might be wise for China to exhibit a bit more flexibility. Chinese President Xi Jinping, center, at the National People’s Congress in Beijing on March 11. Xi may not be receiving information from underlings needed to run the country.   © Reuters

The importance of direct dialogue between the U.S. and Xi will grow as provocations by China’s military continue — isolated but dangerous events that might be less frequently reported to the all-powerful ruler.

“Only Xi will be able to make important decisions on such issues as the South China Sea and Taiwan. The U.S. and China, as well as Japan and China, should hold more summit meetings,” said Shinichi Kitaoka, president of the Japan International Cooperation Agency. “Even if the problem cannot be solved by doing so, it is important to maintain a stable front.”

Meanwhile, Japan must reexamine errors it committed on the path to war with the U.S. eight decades ago and remain wary of them in its daily policies. Daizaburo Yui, professor emeritus at Hitotsubashi University and expert on the history of Japan-U.S. relations, reconsidered whether and how Tokyo and Washington could have avoided the war in his recent book, “Sakerareta Senso” (War That Could Have Been Avoided).

Japan and the U.S. could have avoided conflict if Japan had applied the brakes to its confrontation with China in the 1920s and prevented the Manchurian Incident that paved the way for the Japan-U.S. war, Yui concluded.

“In China, movements to demand revising unequal treaties imposed during the Qing Dynasty were kindled in the 1920s,” Yui said. “The U.S. and Britain shifted to negotiations of conditions and agreed on revisions bit by bit. Japan had opportunities to do so like the U.S. and Britain, but failed to act flexibly because it persisted with its interests in Manchuria.”

While the large number of nuclear weapons in the world may deter full-scale wars between the great powers, they will cause catastrophic damage once unleashed.

Due to this chilling reality, learning from the past is more important than ever.