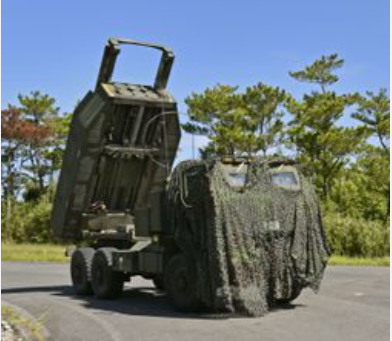 The U.S. Marine Corps will airlift the cutting-edge High Mobility Artillery Rocket System (HIMARS) over a long distance for the first time in Japan, the Sankei Shimbun learned on Nov. 27. The airlift will be performed based on the Expeditionary Advanced Base Operations (EABO), a new operational concept that anticipates a Chinese missile threat, during joint drills with the Ground Self-Defense Force (GSDF) in December. The airlift will be carried out based on a plan for the Marine Corps, which is deployed from afar, to use the HIMARS and the GSDF to use the surface-to-ship Missile (SSM) to counter China’s missile network in responding to a contingency on a remote island of Okinawa Prefecture. It will be the first time for the GSDF to conduct joint exercises [with the U.S.] while collaborating under the EABO.

The U.S. Marine Corps will airlift the HIMARS over a long distance during the Resolute Dragon 21 joint training with the GSDF. The training will be held at Camp Hachinohe in Aomori Prefecture and Yausubetsu Training Area in Hokkaido from Dec. 4 through 17 with the participation of some 1,400 GSDF personnel and about 2,650 Marines. (Abridged)