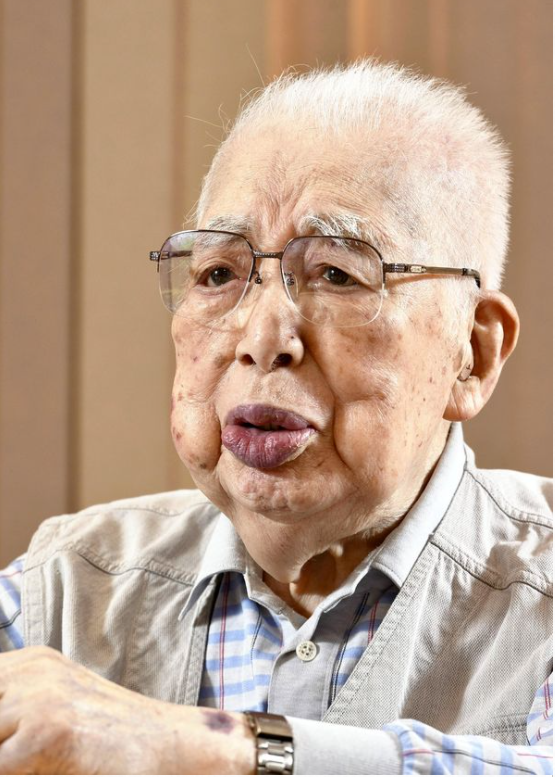 The Yomiuri Shimbun / Former Japanese Imperial Navy lieutenant Shizuhiko Haraguchi talks about the attack on Pearl Harbor, which he was involved in 80 years ago, at his residence in Unzen, Nagasaki Prefecture, in October.

On Dec. 8, it will mark 80 years since the Japanese Imperial Navy made a surprise attack on the U.S. Pacific Fleet stationed at Pearl Harbor on the Hawaiian island of Oahu (Dec. 7 in the U.S.).

Shizuhiko Haraguchi, now 100, took part in the mission as a navy lieutenant. While memories of the success of the operation evoke pride and a rush of excitement in him even now, he strongly adds, “War must never happen again.” Here is his story.

“The start of war is inevitable. As a Japanese male and as a soldier, the chance of my lifetime is coming.”

That was Haraguchi’s entry in his diary on Nov. 15, 1941. Born in Hiroshima Prefecture, Haraguchi was 19 at the time. That day, he had graduated from the Naval Academy where naval officers were trained.

Back then, Japan was bogged down in the Japan-China War, and its economy was battered by sanctions including a crippling oil embargo imposed by the United States. Public sentiment toward war was growing.

In his diary, which Haraguchi still keeps in a safe place, he recorded in detail the tension and passion of the times.

On Nov. 18, 1941, Haraguchi departed Saiki Bay in Oita Prefecture aboard the heavy cruiser Chikuma. He turned 20 while at sea, and the Chikuma arrived at Hitokappu Bay on Etorofu Island where the Navy’s attack group was forming.

“All of the crew members listened to the briefing with an extraordinary sense of tension and determination,” Haraguchi wrote in his diary on Nov. 24.

The ship’s captain had announced the plan for the surprise attack. The crew chanted “Tennoheika Banzai!” (Long live the Emperor) three times, and toasts were made in quarters. Two days later, they set sail for Hawaii.

On Dec. 1, 1941, the final decision to start the war was made at a conference before Emperor Showa. Isoroku Yamamoto, commander in chief of the Combined Fleet, issued a coded telegram the next day to the attack group, setting the date of the attack.

■ Sounds of the attack

On Dec. 7, in Hawaii, the clouds over the sea north of the islands were glistening in the early morning sun.

A reconnaissance plane took off with a roar from the Chikuma. Attack planes took off from the six assembled aircraft carriers, and headed south in formation.

“The enemy is at Pearl Harbor.”

Haraguchi transcribed in his diary what he heard over the radio that day. As a navigation officer, his job was to transmit the radio communications to the captain.

“I saw with my eyes and heard with my ears something extraordinary, and I was moved,” said Haraguchi, recalling the excitement he had felt and has never forgotten.

The military success was celebrated back home in Japan with a festival-like fervor. But it did little to cause the United States to lose its will to fight, which was the aim of the attack. Instead, Haraguchi said, “It strengthened solidarity within the United States,” and he started feeling uneasy.

His premonition was correct, as only six months later in June 1942, Japan suffered a major defeat at the Battle of Midway, which changed the course of the war drastically. The difference in power between the two nations was overwhelming.

Haraguchi would later serve on the battleship Musashi among his assignments up to the end of the war on Aug. 15, 1945.

After the war, he became a medical practitioner in Nagasaki Prefecture, and from 1976, served three four-year terms as mayor of the town of Kita-Arima, now Minami-Shimabara city, in the prefecture.

Haraguchi had regarded war as “a necessary evil for self-defense,” but that changed over time. With each passing year, his feeling of needless loss grows heavier. “War is a mistake,” he is now convinced.

Of his 430 or so classmates at the Naval Academy, nearly 70% were lost in the war. Those who survived were left with deep emotional scars. The atomic bombs were dropped on his hometown of Hiroshima and on Nagasaki, where he would live after the war, leaving many people to suffer for a long time.

Haraguchi has resided in a nursing home in Unzen, Nagasaki Prefecture, since last year. Although he doesn’t see or hear well now, he maintains interest in issues of world peace, including the situation in Afghanistan.

He said he hopes his voice will carry from his small corner of Japan to the world: “War embroils ordinary citizens against their will. It is something that can never be forgiven. There is no justice in war.”