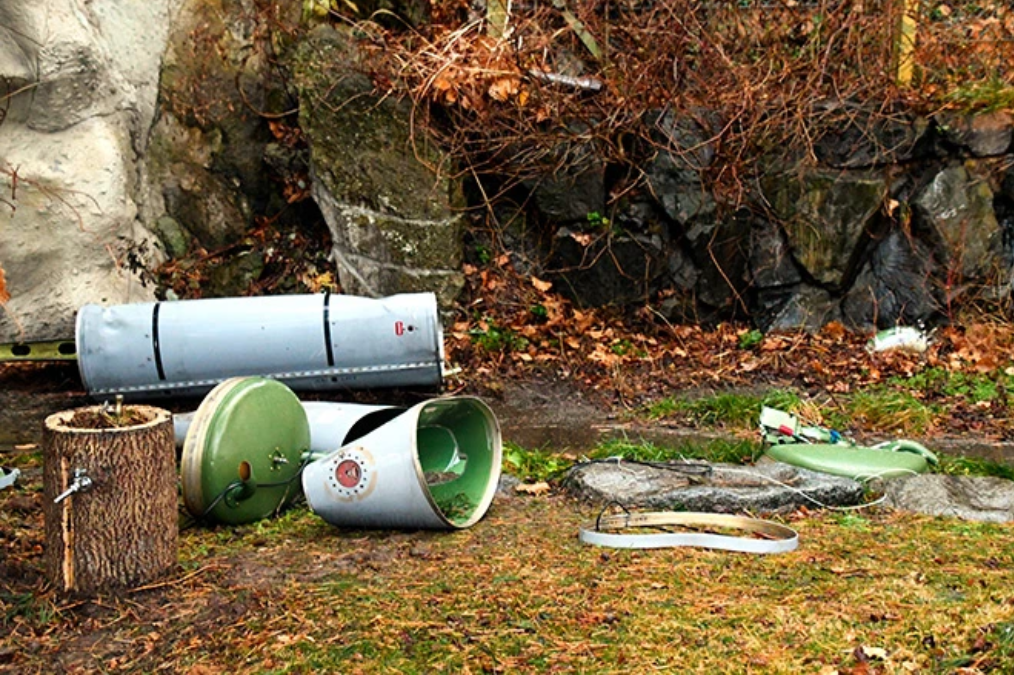 Parts from what is believed to be a fuel tank ditched by a U.S. F-16 fighter jet lie near the Sarugamihanaiwa tunnel in Fukaura, Aomori Prefecture. (Ayaka Kibi)

A U.S. F-16 fighter jet based at Misawa Air Base jettisoned two fuel tanks after the pilot experienced engine trouble and made an emergency landing at Aomori Airport in northeastern Japan, the Defense Ministry and local authorities said.

While there were no initial reports of injuries or property damage, local officials and residents expressed alarm about a fuel tank falling near a residential area.

One of the tanks was found near the Fukaura town government office.

Fukaura Mayor Mitsuru Yoshita held a news conference Dec. 1, a day after the incident, and said he would press the U.S. military to determine the cause of the incident and take steps to ensure there is no recurrence.

Accompanying the mayor at the news conference was Michio Ichikawa, the head of the Tohoku Defense Bureau.

Ichikawa, noting that homes were located near where one of the fuel tanks landed, apologized to local residents for causing them undue anxiety. The other fuel tank has yet to be found, but it is believed to have landed near Mount Iwakisan, Ichikawa said.

Yoshita said the Nov. 30 incident brought home the stark realization that his town was in the flight path of training exercises. In light of that, he vowed to call on the U.S. military to adopt stricter safety measures.

Aomori Governor Shingo Mimura raised the matter at the Aomori prefectural assembly on Dec. 1, saying, “I am taking this very seriously seeing as it involved a heavy volume of flammable fuel and the possibility of a major disaster.”

In Tokyo the same day, Defense Ministry sources said officials would call on their U.S. counterparts to ground all F-16 jets based at Misawa until their flight safety could be confirmed.

Authorities at Misawa Air Base announced Nov. 30 that the two fuel tanks were dropped near Mount Iwakisan around 6 p.m. Twelve minutes later, the F-16 jet made an emergency landing at Aomori Airport, which led to the closing of the airport’s runway. At least seven commercial planes were unable to land or take off.

Personnel from the Misawa base moved the jet from the runway early Dec. 1 so commercial flights could resume.

According to the Defense Ministry, the F-16 had a single pilot. The plane was flying from the Sea of Japan side of Aomori Prefecture and heading back to Misawa Air Base when it experienced engine trouble. An accompanying F-16 managed to return to base.

After the incident, Col. Timothy Murphy, vice commander of the 35th Fighter Wing based at Misawa, said priority was placed on maintaining the safety of military personnel and local residents.

A number of local residents in Fukaura said they heard what sounded like a collision.

An employee at the town government office headed for the scene, but police had already sealed it off.

A driver of a local taxi company heard a loud sound when the fuel tank hit the ground and went to investigate. A two-meter long fuel tank was found near the road. A female employee of the company said aviation fuel was splattered over the road.

An F-16 jet based at Misawa Air Base was also involved in a similar incident in February 2018 when an engine caught fire soon after take-off. The pilot ejected the two fuel tanks into Lake Ogawarako and returned safely to base. 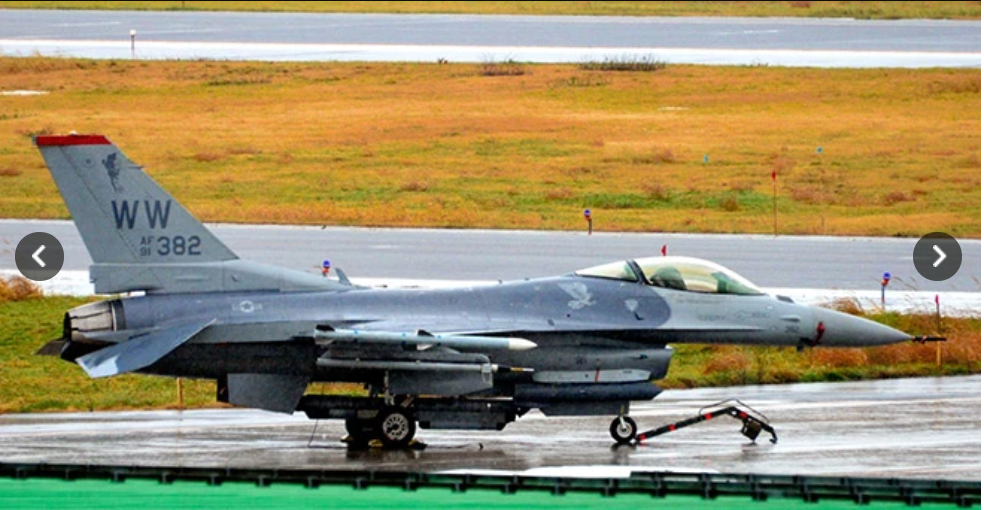 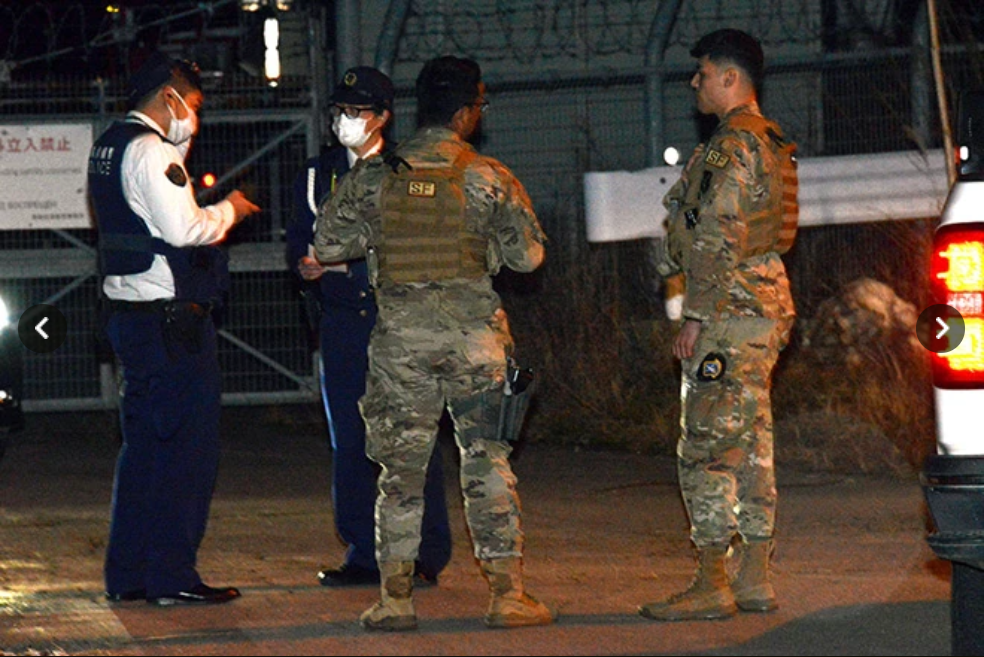 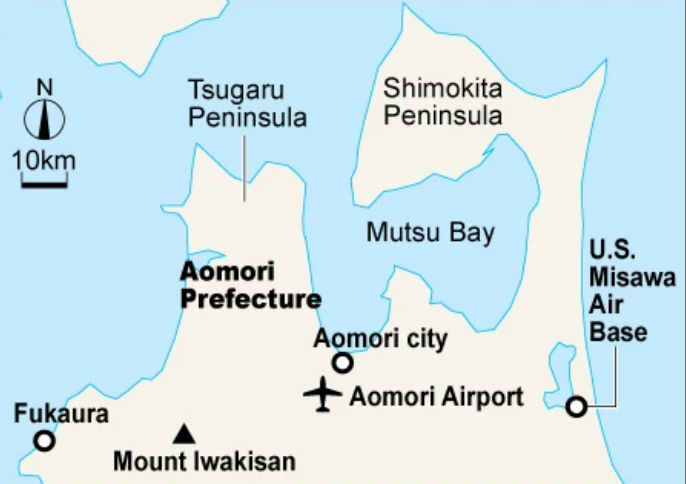 (Ayaka Kibi and Shuichi Doi contributed to this article.)