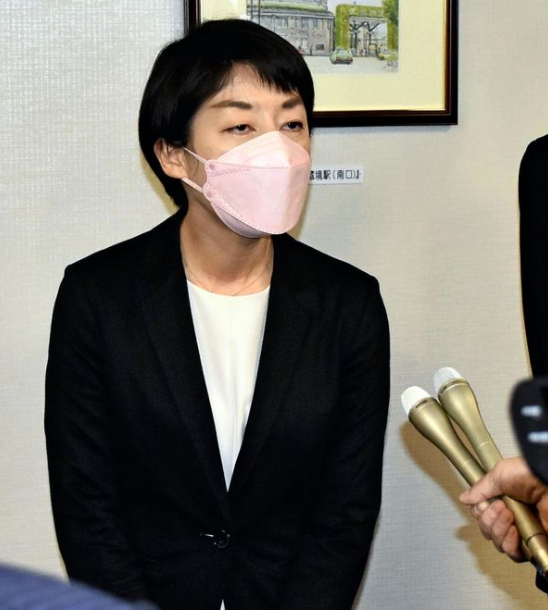 A city ordinance bill related to the local referendum system, which the municipal government of Musashino, Tokyo, has proposed to the city assembly, is causing a stir because it would allow foreigners who have lived in the city for more than three months to vote in local referendums.

While there has been an increase in cases in which foreigners take part in local referendums, the issues decided through local voting are diverse. The possibility that residents with foreign nationality could get involved issues related to national security through participation in a local municipality’s decision-making process has triggered voices of concern.

■ Assembly to vote this month

“In advancing city residents’ autonomy, we would like to have local issues considered by the people together, regardless of nationality,” Musashino Mayor Reiko Matsushita told reporters on Nov. 19.

The ordinance bill, which she submitted to the assembly on that day, is designed to establish a permanent referendum system, whereby the rules are laid down in advance for local voting to be held in the future. The bill is characterized as one that will give voting rights to residents of foreign nationalities aged 18 or older who have lived in the city for three months or more, including foreign students. Although the referendum results would not be legally binding, the bill states that “the results will be respected.”

Those who oppose the bill consider it problematic that giving foreign residents voting rights in local referendums could mean giving them the right to vote in “elections” in a broader sense of the term.

Akihisa Nagashima, a Liberal Democratic Party member of the House of Representatives, whose electoral base is in Musashino, made a street speech in the city on Sunday to oppose the bill, together with some city assembly members. “The franchise is a right inherent to the Japanese people. The referendum results would have a huge impact on the political decisions to be made by the city,” Nagashima said, arguing for the bill to be withdrawn.

The ordinance bill is slated to be put to a vote on Dec. 21. As many members of the city assembly have yet to make up their minds, whether the bill will pass remains uncertain.

According to the Musashino city government, as of last December, permanent referendum systems were already in place in 78 municipalities. Of them, as many as 43 include foreign residents among those qualified to vote. The ordinances set varying conditions, such as granting voting rights only to foreign permanent residents. Only two municipalities — Toyonaka, Osaka Prefecture, and Zushi, Kanagawa Prefecture — grant foreigners voting rights under the same conditions as Japanese citizens.

The municipal government of Akashi, Hyogo Prefecture, submitted to the city assembly an ordinance bill designed to recognize foreign residents as qualified to vote in local referendums in 2015. But the bill, criticized as too expansive, was voted down.

One example of a case in which foreign residents participated in a local referendum was a 2017 vote on a plan to build a municipal hospital in Yasu, Shiga Prefecture. foreign permanent residents who had lived in the city for at least three years took part. Although voter turnout fell short of the prescribed level for the referendum to be effective, it demonstrated that foreigners were able to act on their stances on an issue related to their community.

There are many instances in which the authority of local governments has affected issues related to national interests, such as national security and energy.

Over the issue of relocating the U.S. Marine Corps’ Futenma Air Station in Ginowan to the Henoko district of Nago, both in Okinawa Prefecture, Okinawa’s governor and others who oppose the relocation have been trying to block it by wielding local government power, thus delaying the plan.

In Yokohama in 1972, the U.S. forces wanted to transport tanks that they would use in the Vietnam War. But Yokohama Mayor Ichio Asukata blocked their delivery by not approving the tanks’ passage through city roads, giving rise to controversy.

In more recent times, there was a case in which foreign residents were eligible to vote in a local referendum connected to the deployment of the Self-Defense Forces. When Yonaguni, Okinawa Prefecture, held a referendum on whether to approve the town hosting an SDF garrison in 2015, there were five foreign permanent residents among the 1,276 eligible voters. Of the people who actually cast votes, 632 voted yes and 445 voted no.

Tomohide Murai, a specially appointed professor at Tokyo International University and scholar on international politics, said: “As there are foreigners who pay taxes, it is important to provide residents with public services without differentiating between foreigners and Japanese. Yet as a general principle, one’s nationality signifies that one is to act in the national interests of that country, so it is problematic for a resident of foreign nationality to be involved in the decision-making process of even a local community.” 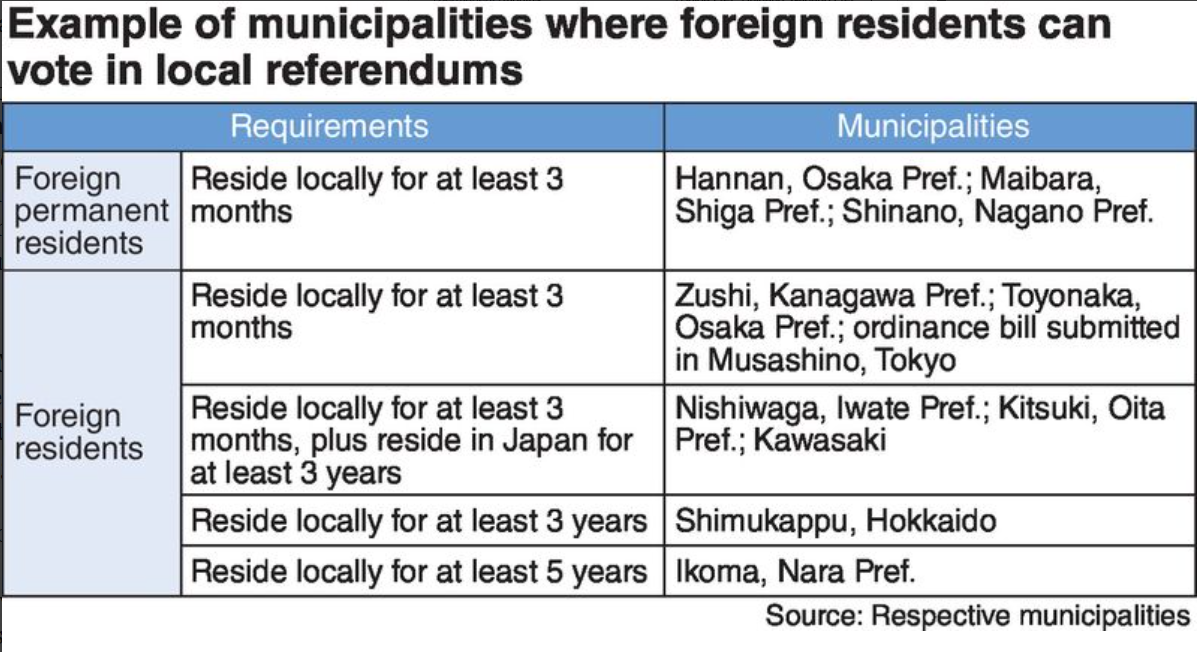