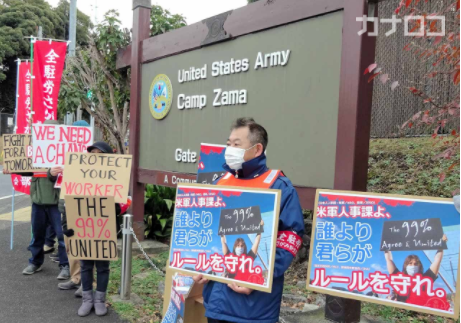 A protest rally held by the All Japan Garrison Forces Labor Union (Zenchuro) in front of the main gate of Camp Zama one year ago. Many complaints have been submitted by workers who have fallen victim to workplace power harassment incidents even after the protest rally.

More cases of harassment of Japanese employees by people in positions of power have been confirmed at the U.S. Army’s Camp Zama (which straddles Zama City and Sagamihara City’s Minami Ward). Two female workers assigned to an aviation battalion submitted a complaint about bullying from a female Japanese colleague to their supervisor, who is affiliated with the U.S. military, but their complaint was left unattended. Another of their supervisors forced the same two women to perform work that is not based on their master labor contract. The women filed a complaint to the human resources office, but it did not address the issue properly, resulting in the deterioration of the two workers’ health and their taking sick leave. On Dec. 2, the women applied for workers’ compensation with the Atsugi Labor Standards Inspection Office to seek damages from power harassment.

According to the female employees, another female Japanese worker harassed and slandered them, including not providing them with necessary notifications after they were assigned to the aviation battalion about two years ago. They consulted their supervisor affiliated with the U.S. military, but the supervisor did not address the issue. Another one of their supervisor forced them to participate in a Japan-U.S. joint drill and perform interpretation on equal footing with military personnel. When they explained that the duty is not included in their labor contract, they were reprimanded unreasonably.

In March this year, the two female employees filed a complaint about the harassment by the two supervisors to the human resources section in charge of labor issues at U.S. Army Command in Japan. While they were waiting for the release of the investigation results, they experienced psychological disorders due to stress and took sick leave in April. They have not been paid since July.

One of the female employees recovered from the disorders and resumed working in a different section in October. The other was suggested to return to the same aviation battalion. She is dissatisfied with the human resource office’s response, saying, “I’m still worried because the power harassment issue has not been resolved.”

Camp Zama continues to be plagued by labor problems involving Japanese employees. Some people point out that this is attributable to the inequality in the Status-of-Forces Agreement (SOFA) and discriminatory attitudes and that the Japanese employees at U.S. bases have a special type of employment that is often outside the protection of Japanese law.

The situation prompted the All Japan Garrison Forces Labor Union (Zenchuro), a labor union for Japanese workers at U.S. bases, to stage a protest rally in November 2019. As a result, Zenchuro; the Ministry of Defense, which employs Japanese base workers; and the U.S. forces in Japan agreed to hold talks.

But no trilateral talks have been held yet due to the COVID-19 pandemic. Iijima Tomoyuki, chairperson of the union’s Kanagawa regional headquarters, points out: “We have not held labor negotiations that are as complete as the ones we used to hold before the pandemic. During the pandemic, we have been asked by 11 union members, including the two women who recently had labor issues at Camp Zama, for advice on such problems as power harassment and unpaid salaries. The labor environment is worsening.”

In September, the Zama Defense Office of the South Kanto Defense Bureau sent a request letter to U.S. Army Command in Japan, calling for a swift investigation into the power harassment and fair treatment in the case of the two female employees.

The two employees say: “The HR section, which is supposed to support employees, is taking part in harassment. The section is also asking us to submit revised medical certificates perhaps because it wants to cover up the problems. We want the Japanese government to firmly respond to the issue and improve the situation.”

U.S. Army Command in Japan told the Kanagawa Shimbun: “We can’t comment on details. We take seriously the employees’ complaints and will follow the procedures based on the master labor contract.”