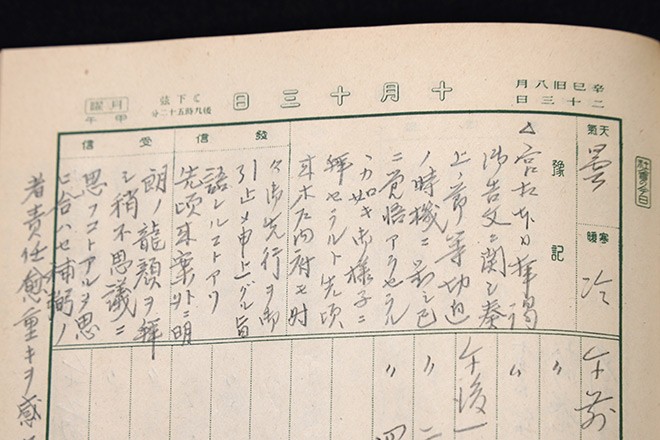 The Oct. 13, 1941, entry of the journal written by Saburo Hyakutake, a close aide to Emperor Hirohito, says the emperor appears ready to go to war against the United States. (Hikaru Uchida)

Emperor Hirohito appeared to be preparing for war against the United States about two months before Japan’s attack on Pearl Harbor, according to a diary that raises further questions about his wartime responsibilities.

Even government ministers were at times worried that the emperor, who was distressed that war with the United States was inevitable, was getting ahead of them in terms of battle preparations, according to the diary penned by Saburo Hyakutake (1872-1963), the grand chamberlain for the emperor.

The diary was deposited with the University of Tokyo in 2019 and became available to the public this year, which marks the 80th year of Japan’s attack on Pearl Harbor on Dec. 7, 1941 (Dec. 8 Japan time).

Hirohito (1901-1989), posthumously known as Emperor Showa, was not indicted by the allied powers in the Tokyo War Crimes Tribunal based on the argument that he was cautious about war and wanted peace, and that he reluctantly agreed to the war pushed by the government and military.

But recent studies of modern Japanese history have turned up records that contradict that narrative, revealing an emperor who at some point was positive about Japan’s entry into a war with the West.

Some documents showed that Hirohito assumed Japan would go to war and ruminated about how to end the war even before it had started.

Other records showed that he called for more aggressive operations after the war started and was happy about Japan’s results. 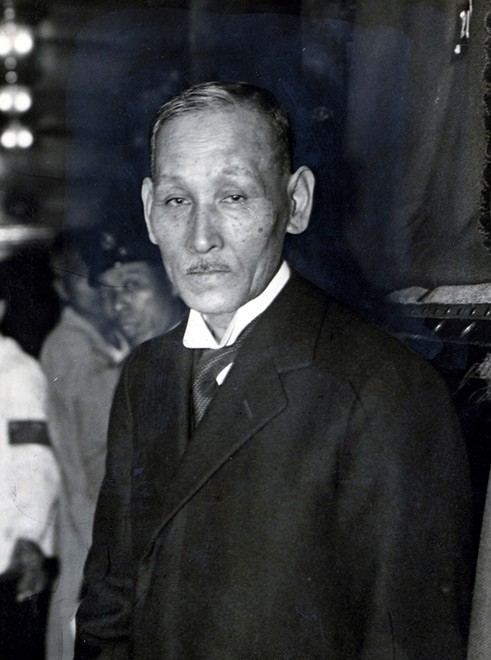 Experts on Japanese history say Hyakutake’s descriptions of the emperor’s attitude toward the war will likely lead to further studies of the theme.

Seiichi Chadani, a professor of modern Japanese history with Shigakukan University who has studied Hirohito’s actions before and during the war, praised the discovery of Hyakutake’s diary.

“The archives available so far, including his biography compiled by the Imperial Household Agency, contained no detailed descriptions that his aides expressed concerns about Hirohito leaning toward Japan’s entry into the war,” Chadani said.

“(Hyakutake’s diary) is a significant record penned by one of the close aides to the emperor documenting the process of how Japan’s leaders led to the war,” he said.

The descriptions in question appear in the Oct. 13, 1941, entry of the journal.

Hyakutake wrote in the entry that he heard Tsuneo Matsudaira, the Imperial Household minister, say after an audience with Hirohito, “The emperor appears to have been prepared for war in the face of the tense times.”

The diary also mentioned that Koichi Kido, minister of the interior, showed concerns that the emperor was apparently running ahead of his aides.

“I occasionally have to try to stop him from going too far,” Kido was quoted by Hyakutake as saying.

At that time, the United States condemned Japan for the 1937-1945 Sino-Japanese War and its Tripartite Military Pact with Germany and Italy, which was signed in September 1940.

Japan began talks with the United States in spring 1941 in hopes of averting war.

But after the talks hit a stalemate, Konoe proposed a Japan-U.S. summit in August the same year to break the deadlock.

In the entry for Nov. 20, Hyakutake wrote that Kido, again, expressed concerns about the emperor’s leaning toward war.

“The emperor’s resolve appears to be going too far,” the interior minister was quoted as saying.

Hyakutake also wrote that Kido said he “requested the emperor to say things to give the impression that Japan will exhaust all measures to pursue peace when the foreign minister (Shigenori Togo) is present.”

Hyakutake served as the grand chamberlain for eight years until 1944, the year before the war ended.

The existence of his diary came to light after many of its entries were incorporated into the annals of Emperor Showa, which was compiled by the Imperial Household Agency’s Archives and Mausolea Department and published in 2014.

Hyakutake’s relatives deposited a total of 25 diaries and pocket notebooks, as well as memos, written by him to the library of the University of Tokyo’s graduate schools for law and politics.

They became available to the public in September.

Many scholars viewed Hyakutake as an aide who “was totally dedicated only to waiting on the emperor hand and foot” and was not involved in politics.