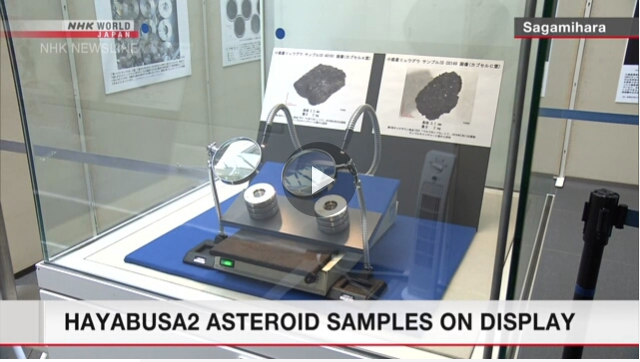 Japan’s space agency, JAXA, says it has provided the US agency, NASA, with asteroid samples taken by the Hayabusa2 probe.

A capsule containing samples from the asteroid Ryugu returned to Earth on December 6 last year, and scientists at research institutes in Japan have analyzed them.

On Monday, exactly one year after the capsule’s return, the Japan Aerospace Exploration Agency’s project team for the Hayabusa2 mission held a news conference.

The team said it provided 0.5 grams, or 10 percent, of the samples to NASA in late November, in line with an agreement.

JAXA will make public a database of the shape, color and other information on each piece in mid-January. The agency plans to solicit proposals on research from around the world and provide samples to parties that come up with excellent proposals.

The agency says analyses in Japan indicate there is water and organic material in the asteroid.

Sand samples from Ryugu are on display at museum in Sagamihara City, Kanagawa Prefecture, near Tokyo starting on Monday.

About 240 people chosen by lottery visited the Sagamihara City Museum. They were allowed to view grains of sand, about 2 millimeters in diameter. Some visitors took photos of the samples with their smartphones.

A man said the samples are tiny, and that it’s exciting as they may make it possible to learn the origin of Earth.

A JAXA researcher, Yada Toru, said the samples could give clues about the origins of Earth and water. He also said he wants people to think of the samples as a treasure for humankind.