Commentary: Japan should not repeat “friends” diplomacy with China over Olympics

By Abiru Rui, Sankei editorial writer and member of the editorial staff of political section 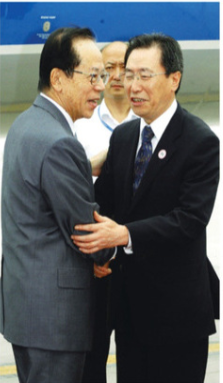 Prime Minister Kishida Fumio and those who take key posts in the administration have been waffling over the Winter Olympics to be held next February in China, which is under international criticism for its oppression of ethnic minorities.

This is a stark contrast to the U.S. and Australia, which have declared a diplomatic boycott, meaning they will not send any government representatives to the Olympics.

Japan’s stance is reminiscent of the “friends” diplomacy of then-Prime Minister Fukuda Yasuo’s administration toward China in the lead-up to the 2008 Summer Olympics in Beijing.

“I would like to make a decision from the standpoint of the national interest, taking into account the significance of the matter for Japan’s diplomacy,” said Prime Minister Kishida.

“We will make a decision at an appropriate time, taking into account all circumstances,” said Foreign Minister Hayashi Yoshimasa.

“We will make our own decision, taking into account all circumstances, but nothing has been decided at this time,” said Chief Cabinet Secretary Matsuno Hirokazu.

It was obvious that they made the statements in line with a prearrangement they had agreed upon.

Prime Minister Kishida told those around him that Japan cannot take a lenient approach to the issue of human rights violations, and the government is said to be considering not sending any Cabinet ministers to the Winter Olympics. If so, why doesn’t the government make a decision quickly?

“Kishida has no particular feelings about China,” according to a lawmaker who was elected as a Diet member at the same time Kishida was elected [for the first time]. Then why is Kishida hesitating?

Defending the oppression of Tibet

The longer the issue is dragged out, the more the differences of opinion within the government and the ruling parties will become apparent, which will only allow China to maneuver to win Japan over to its side.

This reminds me of the words of political thinker Nicolo Machiavelli.

“A weak state is always indecisive, and taking time to make a decision is also always harmful” (“Discorsi” translated by Shiono Nanami).

When the Beijing Olympics were held 13 years ago, the Chinese government’s suppression of demonstrations in the Tibetan Autonomous Region was criticized by the international community, and several European leaders with a high awareness of human rights announced that they will not attend the event.

In such a situation, then-Prime Minister Fukuda defended China at a Diet session as follows and attended the opening ceremony unconditionally: “For China, the Tibet issue is a very serious matter, and I think Chinese leader Hu Jintao (at the time) has addressed it with much consideration and concern.”

This is indeed the man who spoke of his foreign policy as follows at the press conference for the Liberal Democratic Party’s presidential election in September 2007: “Do you do things that your friends don’t like? You don’t. The same goes for relationships between countries. You don’t have to dare to do what they don’t want you to do.”

In March 2008, Prime Minister Fukuda also said about the boycott of the opening ceremony of the Beijing Olympics, “We have to think carefully whether it is appropriate at this stage to criticize loudly or to link the Tibet issue to the Olympics.”

Such a lax response may apparently have given China confidence and contributed to its unwillingness to halt its human rights violations. At the very least, there is no indication that China has reciprocated for Japan’s excessive consideration.

In addition, public opinion both in Japan and abroad is harsher than ever in response to China’s genocide in the Xinjiang Uyghur Autonomous Region.

This raises the question of what was the purpose of Prime Minister Kishida’s creating a new post of special advisor to the prime minister on international human rights issues and appointing former Defense Minister Nakatani Gen, a veteran lawmaker, to the post.

Nakatani also made a vague statement at the group meeting on Nov. 8: “With respect to the Beijing (Winter) Olympics, I believe the prime minister will make an appropriate decision on the matter at an appropriate time, taking into account the various circumstances.”

It is the role of the special advisor to the prime minister on international human rights issues to step in and say things that the prime minister and the foreign minister are reluctant to say and convey the true intentions of the Japanese government to other countries, but Nakatani’s comment is tantamount to saying nothing.

While the U.S, Japan’s ally, and Australia, as a member of the “Quad,” a strategic framework comprising four countries in the Indo-Pacific region, have been making their stance clear, Japan, in the first place, does not have the option of taking China’s side .

Machiavelli also said: “I can assure you that remaining neutral is not a very effective choice, because staying neutral not only makes you the enemy of the victor, but also of the loser, who will see you as an enemy for not helping them.”

Possibility of causing U.S. to have doubts about Japan

Japan’s delaying the announcement of its stance might arouse suspicion in the U.S.

In 1992, the Cabinet of then-Prime Minister Miyazawa Kiichi, who was from the LDP’s Kochikai faction (Prime Minister Kishida’s faction), offered a helping hand to China, which was suffering from the economic sanctions imposed by the international community after the Tiananmen Square incident. Despite opposition and calls for exercising caution, Miyazawa allowed the realization of a visit by the then-Emperor and Empress to China.

Beijing took advantage of the visit as “the most effective way” to have the sanctions on China lifted, according to former Chinese Foreign Minister Qian Qichen. Even if Japan treats China as a friend, China will never consider Japan a friend.