TOKYO — Many Japanese companies have been shying away from investing in domestic plants and equipment as they fret about potential overcapacity locally and turn overseas for expansion, keeping the country’s capital spending in the doldrums and dragging on growth in the world’s No. 3 economy.

The nation’s productive capital stock — or total value of all production facilities and equipment held by private companies assessed by using an age-efficiency profile and retirement pattern — has increased less than 10% over the past two decades, according to data from the Organization for Economic Cooperation and Development, way behind a rise of 50% in the U.S. and 60% in the U.K.

“The stagnation of capital spending is a large contributor,” to the country’s tepid economic growth, said Kyoji Fukao, a professor emeritus at Hitotsubashi University in Tokyo. The problem comes on top of long-festering issues such as Japan’s shrinking and aging population.

The introduction of new equipment and software can boost productivity and stoke economic expansion, Fukao said. Of five major developed economies, he estimates Japan is the only one where the actual rate of capital stock growth has fallen behind the theoretical rate. Faltering capital expenditure comes despite robust earnings at many Japanese companies. Data compiled by the finance ministry shows the most recent peak in pretax profit was 84 trillion yen ($745 billion) in fiscal 2018, up 73% from fiscal 2012 when the policies of so-called Abenomics started under then-Prime Minister Shinzo Abe. Over that period, investment in plants and equipment increased only 42%.

Meanwhile, the supply of labor increased in Japan in the 2010s despite the erosion of the population, with the number of workers on the payroll increasing by 3.78 million over the decade. In particular, employment grew among women and people aged 65 or over.

“Companies have possibly increased the input of inexpensive labor and procrastinated on the input of labor-saving robots among others,” Fukao said.

But the stable supply of labor looks set to dwindle sooner or later as the population shrinks. Although “high tech” Japan might be expected to promote automatization and other labor-saving efforts more emphatically than some other countries, many of its companies could hesitate as they are still haunted by memories of the past.

Following the bursting of the country’s economic bubble in the 1990s, companies were forced into rigorous restructurings in the face of excess equipment, employment and debt. Many still fear overcapacity now.

And Japanese companies have been spending aggressively abroad, with direct overseas investment quadrupling to 28 trillion yen in 2019 from 10 years earlier, and continuing to climb through the pandemic. 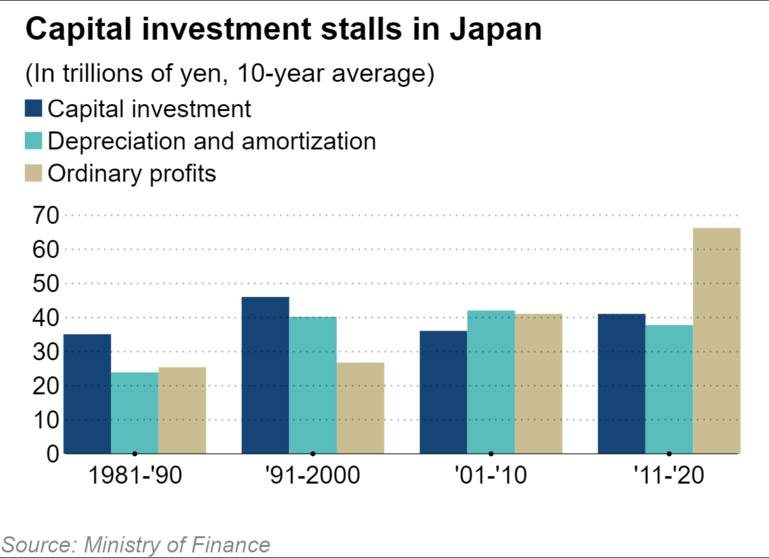 But both Hitachi and Panasonic have been conservative when it comes to capital spending. In fiscal 2020, Hitachi invested 356 billion yen in plants and equipment on a consolidated basis, while Panasonic made a capital investment of 231 billion yen.

Sowing the seeds of growth overseas tends to hit domestic investment hard, as profits earned abroad are often reinvested there.

Needless to say, Japanese companies cannot afford to neglect programs to improve the quality of domestic employment while expanding investment around the world. They need to accelerate the digitalization of operations for the sake of streamlining, while supporting reskilling and other programs at the same time.

Japan should adopt economic policies to stimulate business activity and push to end a vicious cycle that has been weighing heavily on the growth of its capital stock.