Okinawa Times led with a report by British journalist Jon Mitchell in which he claims that he learned from a document that the paper obtained through a FOIA request that the U.S. military released wastewater containing PFAS from a fire extinguishing training facility at the Futenma Air Station to private land through waste pipes running near an elementary school. The paper wrote that it obtained a map showing the route of toxic water running to the private land, saying that the Marines created the map in November 2018 in response to a query from Senator Jeanne Shaheen (D-NH), a member of the Senate Armed Services Committee. 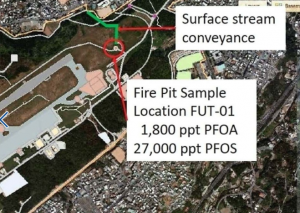 The map explains the detection of 27,000 nanograms per liter of PFOS and 1,800 nanograms of PFOA, 540 times and 36 times the permissible level of 50 nanograms provisionally set by the Japanese government. The paper added that although the map describes the drainage system as a “surface stream conveyance,” the details of this are unknown. Noting that four years will have passed on Dec. 13 since a window from a CH-53 helicopter taking off from MCAS Futenma fell onto the playground of the same elementary school, the paper wrote that the school is being exposed to the threat of toxic substances as well as the operations of U.S. military aircraft.